The third generation of the audi a6 with problematic engines

Audi A6 in the body of the 3rd generation came out for the first time 10 years ago. In those years, the A6 did not stand out from its competitors with its special appearance, but technically there were a lot of innovations, although the car didn’t become safer. Now we will see this in more detail. 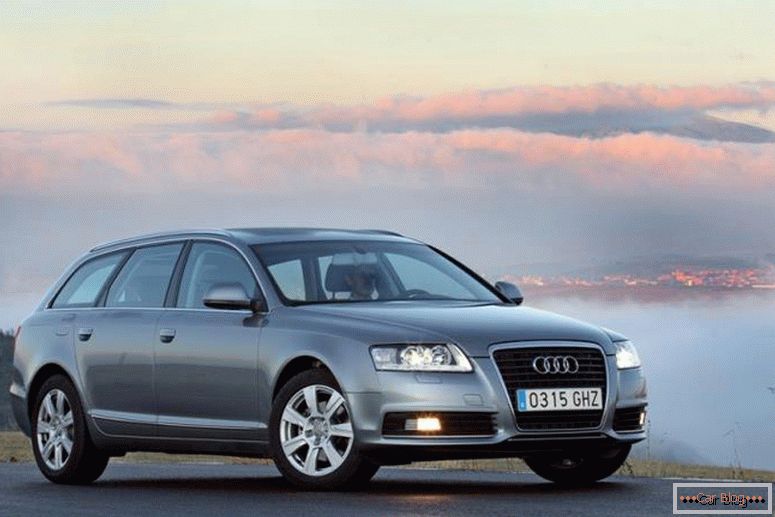 The body of the third generation Audi A6

What does not take away from Audi, so it is the reliability of the body. It is really very resistant, here the hood, front fenders and some internal parts are made of aluminum, and galvanized steel of high quality is also used in the body. Finishing chrome, however, does not differ the same reliability, but this is minor. As a rule, when driving in a city where there is a lot of sand and salt, the chrome edging of the grille on the front end and moldings around the windows are primarily affected. Also, the sensors in the Parktronic deteriorate from salt, and they cost about 60 euros per piece.

After about 5 years of operation, the appearance of the Audi A6 can be spoiled burnt out LEDs. This can occur with tail lights as well as with headlights. And after restyling in 2008, when they began to install a strip of LEDs in the headlights, if at least one diode blows, the entire strip will not shine, so you have to change the entire headlight, and the Audi A6 headlight costs about 600 euros. 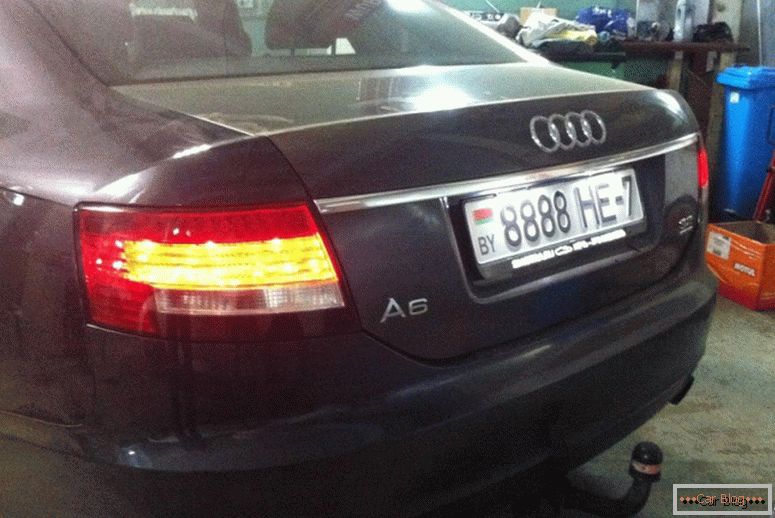 Before buying a 5-6 year old Audi A6 with xenon headlights, you need to look at how they will glow at night because lenses grow muddy over time. There are cases such that dim light is not enough, which can be seen while driving on a night road.

A lot of third-generation Audi A6 electronics, more than 70 control units alone, so even to change the battery, you need to connect a diagnostic computer to the car, if this is not done, the system in the car will not detect the appearance of a new battery. So, here any actions should be carried out in specialized stations.

The third-generation Audi A6 uses an expensive (about 350 euros) voltage regulator. It often happens that the MMI interface has turned off the monitor and does not respond to the joystick, the main thing here is not to make hasty movements, you must first check the condition of the connectors located in the trunk because the system is quite sensitive to the state of these connectors. 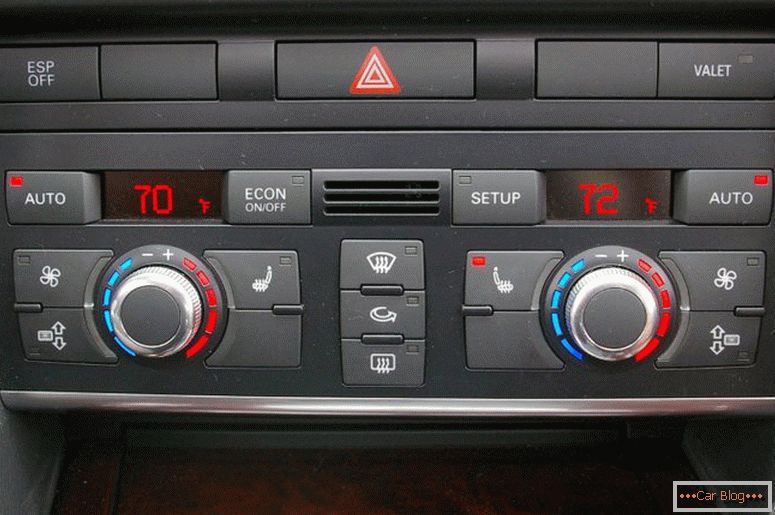 Further, there are cases when, after 100 thousand km. run starts to "fail" climate control, but here, too, do not immediately change the control unit and valve block. Often it helps to simply clean the dirt from the climate control flaps. By the way, these flaps cost about 100 euros.

At one time, FSI and TFSI engines with direct injection were considered innovative, new technologies, so to speak. But, as it turned out in practice, these engines - a weak spot in the third generation of the Audi A6. These engines use aluminum cylinder blocks, which are very short-lived.

Recommended article: New car up to 800,000 rubles: a review of several models

If in the 90s there were million-plus motors in German cars, then these “innovative” cylinder blocks rarely live up to 250,000 km. run Also on the walls of the cylinders used silicon coating, which wears out much earlier and leads to scoring in the cylinder block after approximately 150,000 km. This means that it is necessary to change the cylinder block, which is not very cheap - 3,500 euros. Statistics show that the most problematic engines - 3.2 liter 6-cylinder. But the 8-cylinder BVJs are more robust, thanks to a larger volume. 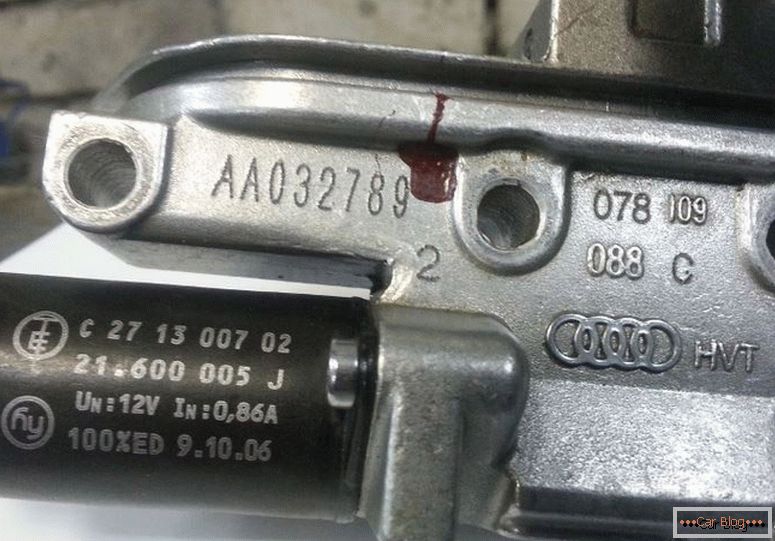 But this is not the end of the engine problem, another weak link is the hydraulic chain tensioner, which is located in the head of the right bank of cylinders, the new one will cost about 120 euros, and besides, it is located upside down. In total, 4 chains are involved, and very soon - after about 100,000 km. run these chains will have to change, to do this you need to remove the engine, and this is a very serious and difficult job, which only professional professionals can do, and this work on changing chains will cost about 650 euros.

Therefore, it is better not to get involved with the 3.2-liter engine and look at other options, if you still really want to get a third-generation Audi A6.

For example, there is a 2-liter turbocharged engine, 4-cylinder (BPJ), it has fewer problems, because the timing belt is used, but the engine design is also not simple. The belt costs about 40 euros and needs to be changed every 120,000 km. and it is not necessary to delay the replacement, because if it breaks, you will have to change the head of the block, and this is already 1,300 euros. 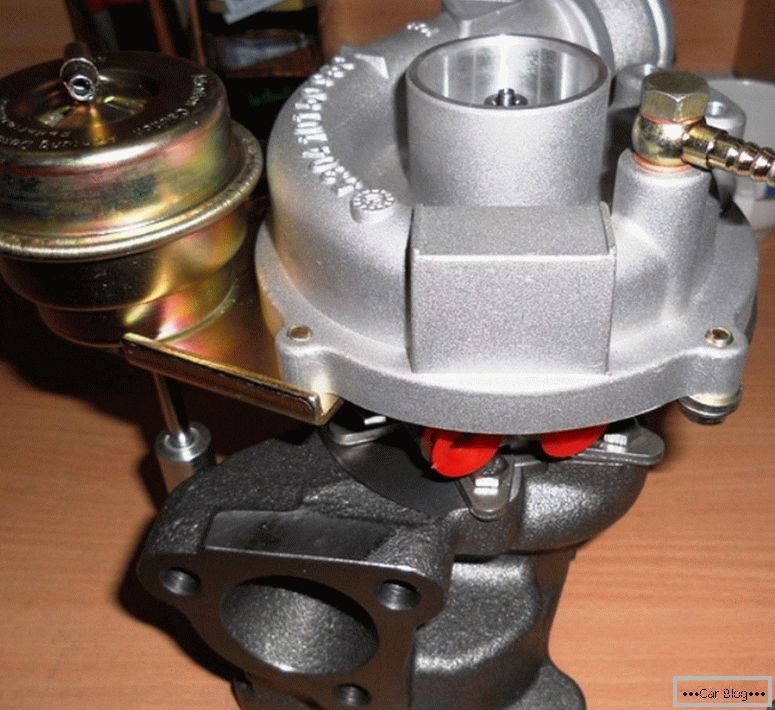 If we consider the turbocharged TFSI engines, all of them, regardless of the volume, are prone to increased oil consumption - about 1 liter per 1000 km. And this is a German engine ... If you try to solve this problem and change the valve seals for 400 euros and rings for 500 euros (including work), you still will not have to be completely sure and check the oil level very carefully. If there is an oil starvation, you will have to prematurely change the turbocharger, and it can be enough for 250000 km., and it costs expensive - 1500 euros.

It is worth remembering that these engines with direct injection are particularly picky in terms of fuel quality, if you refuel with low-quality gasoline, then, literally, several expensive spare parts will fail, namely: nozzles, each of which costs 140 euros, lambda probes which are estimated at about 160 euros and, of course, particularly expensive (1900 euros for each) neutralizers.

Looking at all this, dorestaylingovy cars released before 2008, which were completed with a 3-liter engine (BBJ) with distributed injection, seem just a benchmark in terms of reliability. In this engine, perhaps, can fail after 100,000 km. ignition coils, the price of which is approximately equal to 20 euros. This engine uses a timing belt, which must be changed every 100,000 km, it costs only 75 euros, and together with the belt it is also necessary to change the glands of camshaft adjusters, a pair of these glands will cost about 30 euros. 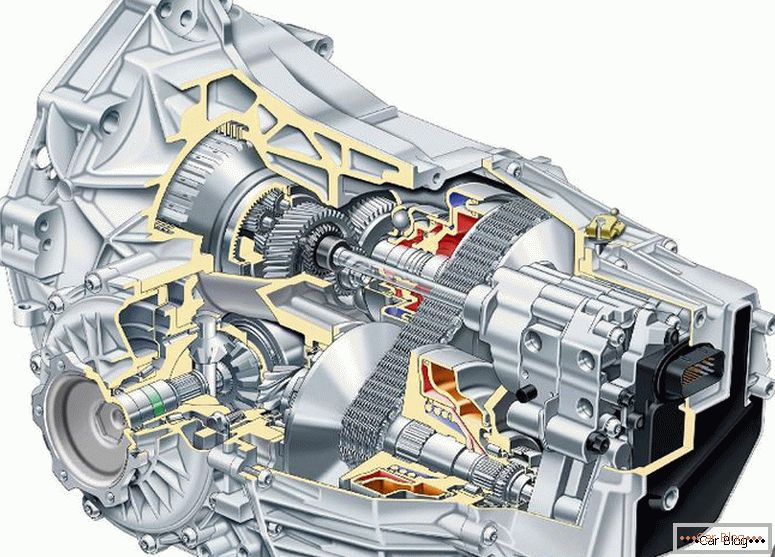 But since after 2008 these engines were no longer complete with the Audi A6, it remains to pay attention to diesel engines, which have their drawbacks, but in general, they are more reliable than gasoline engines.

Each diesel engine uses active electrohydro supports of the engine, they can withstand no more than 120,000 km. run, they cost 130 euros per piece. Problems arise in 4 and 6-cylinder engines due to the air intake manifold drive. This drive is only enough for 100,000 km., And its replacement will cost about 400 euros. Everything else is good.

As for the 2-liter diesel engines, it is important watch out for pump chainthat pumps oil. This circuit is after 100,000 km. the run begins to stretch, it costs inexpensive - about 30 euros, but if you don’t change it in time, you will have to do a major overhaul of the engine, which is a completely different expense. 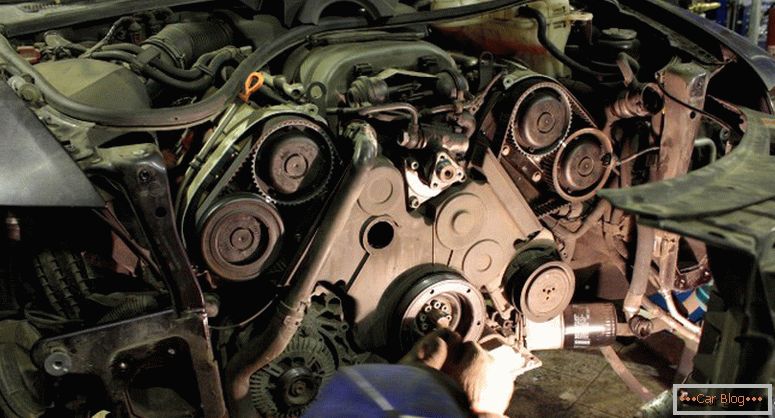 It is necessary to refuel with high-quality diesel fuel, because the Common Rail injection system is installed in diesel engines. If you fill in the "burned" diesel, you will have to fork out for piezo jets, each worth more than 300 euros and for pump nozzles, the price of which is approximately 700 euros per piece.

Transmission in Audi A6

Least of all problems are delivered to their owners 6-speed manual boxes. The clutch calmly withstands more than 200,000 km. run, and change it will cost about 400 euros.

With regards to the automatic box, here things are sad. The ZF “automata” used in the A6 very soon begin to break, especially for those who like to drive in a sporty style, after about 100,000 km they will have to repair the box, and it will cost about 3,500 euros.

Further, an unpleasant problem is considered blocking hydrotransformer. According to the instructions, the oil in the gearbox must be changed every 150,000 km, high-quality oil, the price for 1 l. - 40 euros. When replacing gear oil, you should choose the oil clearly by the VIN code so that you do not have to pay a lot of money to repair the gearbox. 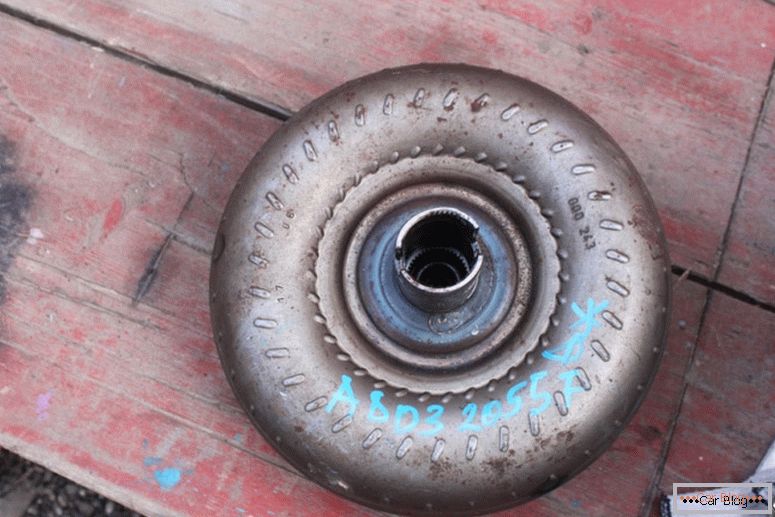 There are also A6 models with a Multitronic 01J variator box, which also contains several potential costs. The control unit of the variator, which operates in the oil, if the temperature rises to 110 degrees, and this happens during fast driving, then this unit is more than 100,000 km. will not last, and its replacement will cost 1000 euros. After the same one hundred thousand kilometers variable speed drive chain wears out and it will have to change, and it will cost about 500 euros, along with the work. The service life of the German variator is small, for example, the Japanese Jatco will travel approximately 150,000 km.

As always - it is necessary to change the transmission oil in the variator, which costs about 20 euros per liter, and it will take about 7 liters. Usually, this is every 60,000 km., And if the car is operated in urban traffic jams most of the time, it is advisable to change the oil after 40 thousand km. For those who decide to forget to do an oil change on time, there is a risk of sentencing the chain, the pulleys and even the oil pump. In general, such forgetfulness can lead to a major overhaul of the variator, which will take about 3,000 euros.

Suspension in the Audi A6

Unlike the 2nd generation, in the 3rd generation A6 the same suspension was installed as on the representative Audi A8. Reliability at a very high level, but also prices for repairs and spare parts are about 1.5 times higherwhen compared with the previous Audi A6. In general, the suspension quietly maintains 200,000 km. run Not without minor problems - after about 100 thousand km. squeaks may appear at silent blocks during steering, each of which will cost about 15 euros. However, to change these silent blocks, you have to tinker, so it makes sense to immediately change the entire node, which in the collection will pull 150 euros. If you have already reached the suspension, then it makes sense to upgrade the stabilizers and bushings in one fell swoop, they cost about 30 and 5 euros, respectively. And the rest, the suspension does not cause problems. 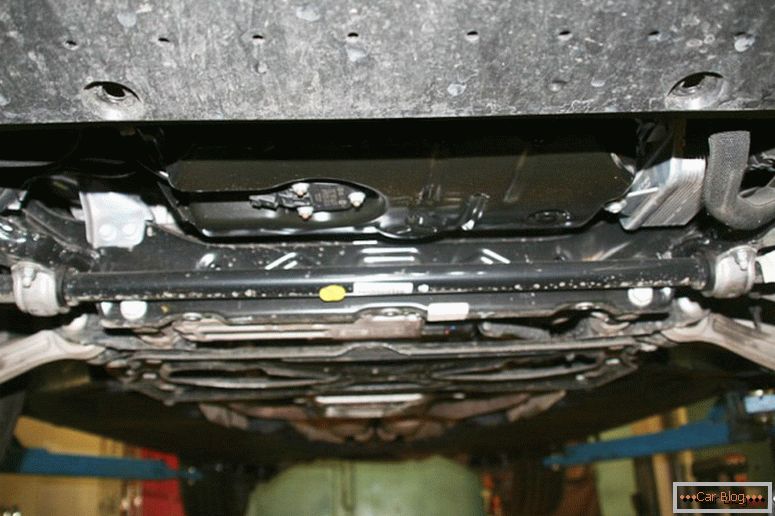 As for the air suspension, as you know, this thing is not cheap to maintain. After about 120,000 km. rear pneumatic cylinders are lowered, in order to change them, you must pay 380 euros per unit. But the front desk assembly will cost 1,400 euros.

The price of the Audi A6 is still high, but not more than the "top five" BMW or Mercedes E-class. Every year, these cars are cheaper by about 10%. For those who still decide to buy a third-generation Audi A6, you should pay attention to the post-diesel diesel options with manual transmission and bypass the tenth expensive cars with FSI / TFSI and automatic transmission, and you will be happy.

And in conclusion of such an interesting topic as the review of the "sores" of the used third-generation Audi A6, the following video suggests itself: 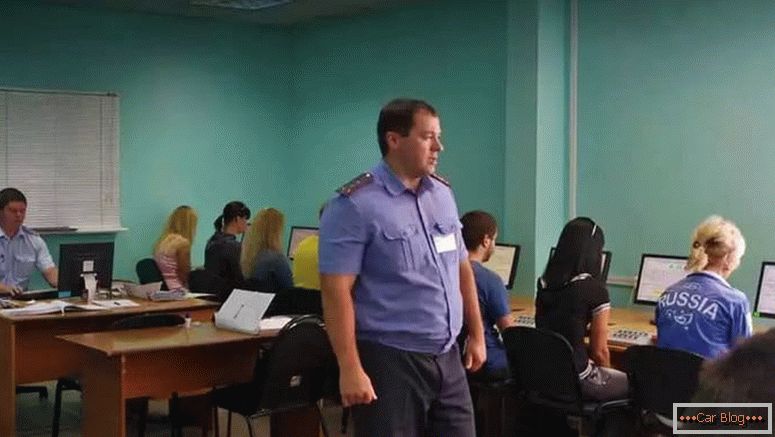