Why is the title of the national car that decade already belongs to the immortal "Zhiguli"? The answer is extremely simple - the price within 200-250 thousand rubles serves as an excellent incentive, forcing people to vote with not even mind or feelings, but a purse. Maybe there are new candidates for the title of people's car - can it really be Logan or Solaris with their price in the range of 500-600 thousand can not become real leaders? Of course, the cost of more, and you have to take out a loan or postpone the purchase for the foreseeable future. But everything is real - and we will take a closer look at both machines in order to understand which of them really deserves the choice of the domestic consumer. 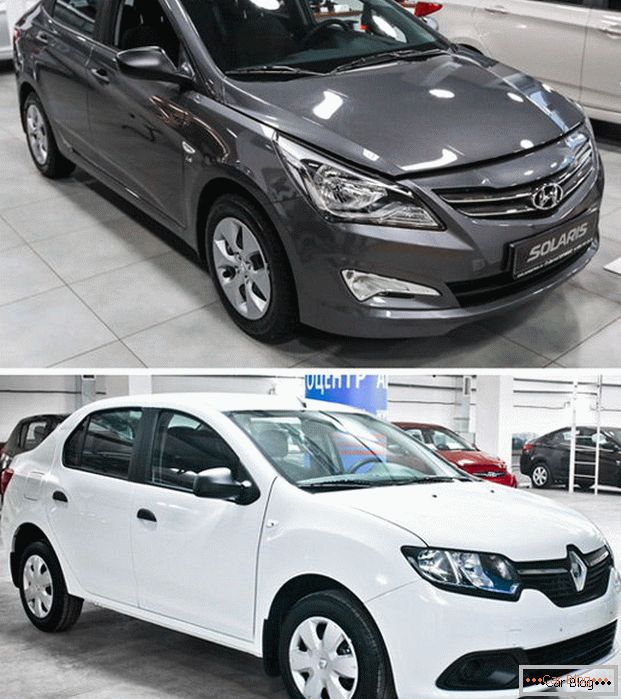 Even after a change of generations, Renault Logan remained recognizable - largely due to the unique silhouette, which already became familiar on Russian roads. However, outwardly the car became more solid and elegant at the same time. A large emblem stands out clearly in front, located between rectangular headlamps, slightly inclined towards the center. However, most of all are remembered in the updated Renault Logan details - such as chrome rims around the fog lights, interconnected by a silver line, passing in the middle of the hole in the front bumper. From the front, it seems as though Logan has seriously increased in size and moved to the C-class, or even to the compact crossover category. 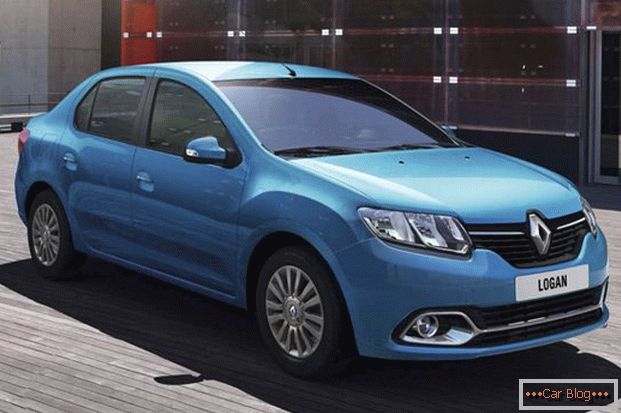 If you choose Hyundai Solaris or Renault Logan by design, then the French-Romanian car has no chances. Good looking before restyling Solaris is now completely transformed and made an application to participate in the premium class. That is how you can regard the complex shape of the sidewalls, which previously could be seen on Mercedes and Lexus, but not on the budget Hyundai. Hyundai Solaris headlights have increased in size, and the grille has received a clearly distinguishable V-shape. Now the car began to look not only prestigious, but even aggressive, that fans will appreciate a fast ride. 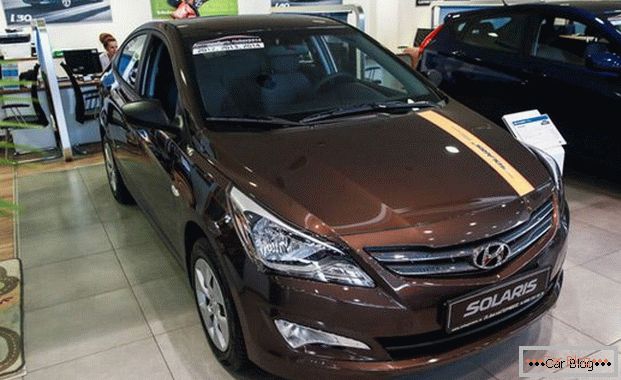 It would seem that the profile of the Hyundai Solaris should look the same as a car of the previous generation, since the body has not changed during restyling. However, the complex shape of the underpieces on the doors and wings completely changes the overall impression - it seems that Solaris has become squat and stretched out in length. The compact sedan now shows a clear resemblance to the larger Elantra model. And only behind Solaris almost did not change - only matt lining appeared on the lamps. If we talk about the general impression, the Hyundai Solaris looks exactly as expected from a modern city car - stylish, dynamic and somewhat aggressive.

Renault Logan can rightly be called modern "Lada". In the cabin of this car, the eye can not catch on a certain prominent element - the design is very simple, albeit neat. Most attracts the attention of the driver and passengers serving forward center console, which hangs over the gearshift lever. However, even in expensive versions of Renault Logan, it looks quite poor - the lacquered surfaces coexist with cheap silver plastic, and the multimedia system looks like a Chinese tablet. 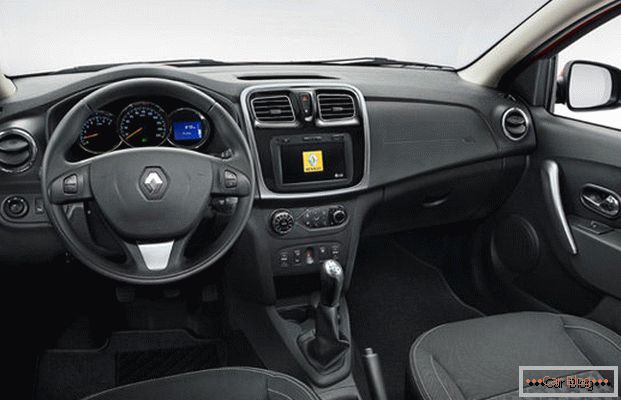 The front seats of Logan cannot be called comfortable, although even on a long journey the driver with a passenger will not experience severe inconvenience. The main problem of the seats in the Renault Logan is a convex profile that often changes body position. However, the car can still be forgiven for the second row of seats, which can be called the widest in the B-class. Three adults who do not feel cramped can fit here. In addition, the advantages of Renault Logan include a large amount of luggage, equal to 500 liters, and a considerable width of its opening.

In Hyundai Solaris, you feel more relaxed and confident than in Renault - right in front of the driver there is a wide front panel decorated with many buttons and rotary knobs. And the claustrophobic attack in the driver and passenger of Hyundai just will not happen - monumentalism is diluted with smooth punching in the shape of waves. Especially it is worth paying attention to the devices Hyundai Solaris, equipped with a soft but bright backlight and a well-read screen trip computer. However, it’s still too early to talk about the prestige and luxury of Solaris - cheap materials are used in the decoration of the car, which are not very pleasant to the touch and make loud sounds even with light strokes. Therefore, the beauty of the Hyundai Solaris is only external, although you can not refuse the car with excellent ergonomics. 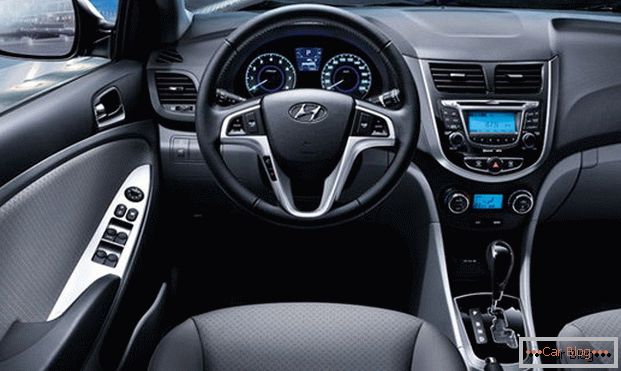 If we compare the seats of two cars, Hyundai will definitely win in comfort from the front. The seats have an ideal profile that allows the driver with a passenger to feel comfortable even after several hundred kilometers on the road. In the expensive configuration, Solaris is equipped with heated front seats, and its threads warm not only the back and thighs, but also the human lower back, which is very important in the conditions of severe winters. But behind the Hyundai, the Renault Logan is definitely losing, since the passengers on the second row are limited by the high ceiling, the small width of the seats, and the short distance to the front seats. The trunk of the Hyundai Solaris is only slightly inferior to the Logan (470 liters), however, it is not so convenient to use it at the expense of low loops, a narrow opening and a large loading height.

Comparison on the go

If you want to buy Hyundai Solaris or Renault Logan, you should carefully consider the dynamic characteristics of both cars, since they are radically different. After restyling, the French did not leave Russian consumers with a large choice of engines - only one power unit with a volume of 1.6 liters is installed on the Logan, and in the basic version it is deformed to 82 horsepower. It feels like this engine is no better than the old Renault 1.4 engine, although a slight increase in thrust at low revs is noticeable. The new Logan accelerates to “hundred” in almost 12 seconds, and reaches a speed of only 170 km / h. However, among its advantages are:

Renault Logan cannot be called a champion in terms of economy - with fast driving, fuel consumption can reach 10 liters per 100 kilometers, and the average figure in mixed mode is approximately 8 liters. Interestingly, in a more powerful version, Logan consumes about 0.2–0.4 liters of fuel less, despite a noticeable increase in dynamics. But Renault can be called a champion in comfort suspension on Russian roads - he confidently passes any bumps, annoying strong blows only when passing especially large holes or “speed bumps”. Moreover, the Renault Logan chassis is famous not only for its soft character, but also for its endurance, since even with a large run it does not require serious repairs.

If we compare Logan and Hyundai Solaris, we can immediately say that it is better. Even with the base engine 1.4 Korean sedan is gaining 190 km / h and reaches "hundreds" in 11.5 seconds. If you give preference to the Hyundai Solaris with a more powerful 1.6 engine, then the dynamics of the car will be even better than the Honda Civic with its 140-horsepower powerplant! And we can not say that the base Solaris is unsuitable for a city or highway - the car is truly universal. When driving on a suburban highway, it allows you to maintain a good pace due to the use of a six-speed gearbox, and in the city fast accelerations are provided by “short” gear ratios of the first two transmission stages.

Unlike the Renault Logan, the Korean Solaris sedan can be called very economical. Even in a city, the average fuel consumption fluctuates around the figure of 7.5 liters, and when leaving the route, the indicator drops to 4.9–5.5 liters, depending on the pace of traffic. The chassis of the Hyundai Solaris is set up quite well - the suspension does not create unnecessary discomfort, but it does not force the driver to steer constantly due to excessive softness. However, the car has one drawback - when fully loaded, the ground clearance drops to a minimum, and the rear passengers begin to feel strong shocks even when passing relatively small obstacles. Nevertheless, Hyundai Solaris is suitable for independent trips, as well as for family outings - provided that the trunk is not filled to the top with heavy things.

Despite the fact that cars belong to the same class, the differences between them are visible to the naked eye. Renault Logan offers its owner a high load capacity, large capacity, as well as comfort and reliability of the chassis. But Hyundai Solaris already in the basic configuration pleases with rich equipment, stylish appearance and excellent dynamic parameters. In addition, Hyundai with its consumption of less than 5 liters of fuel on the highway can be called a real champion in efficiency. 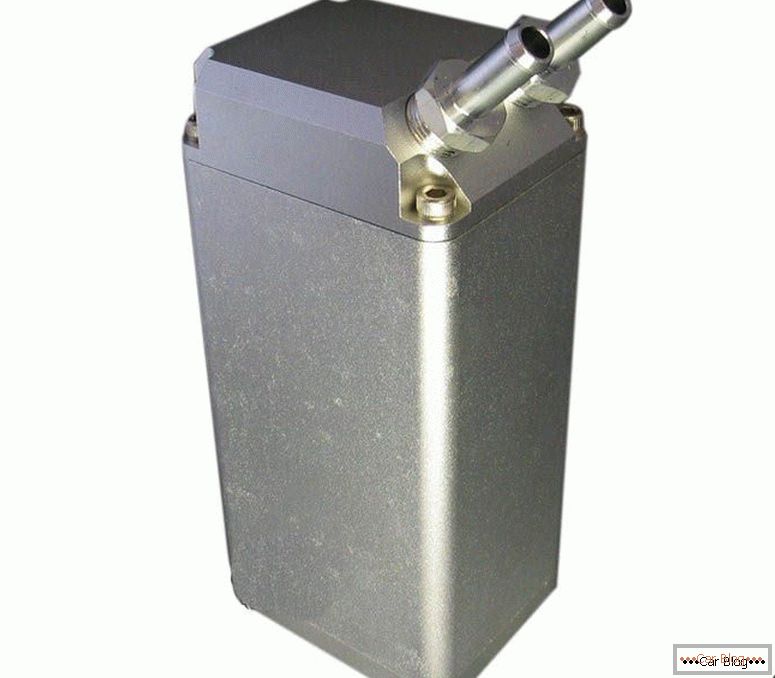 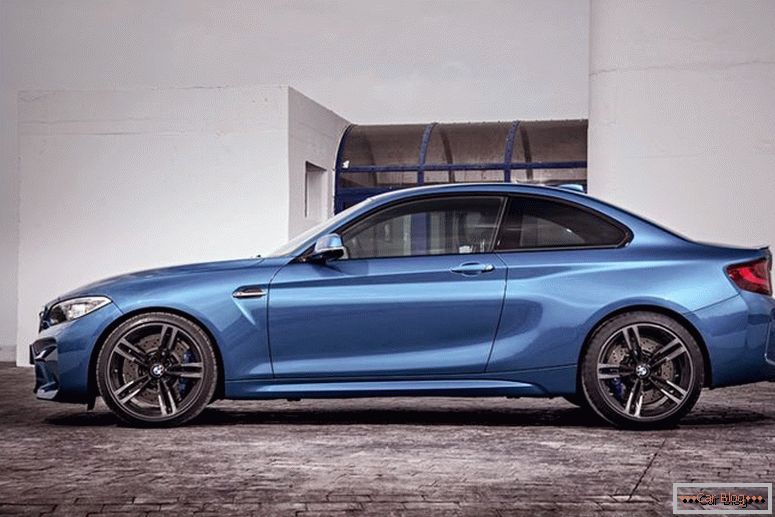