Cheap cars with automatic transmissions are very popular in Russia. 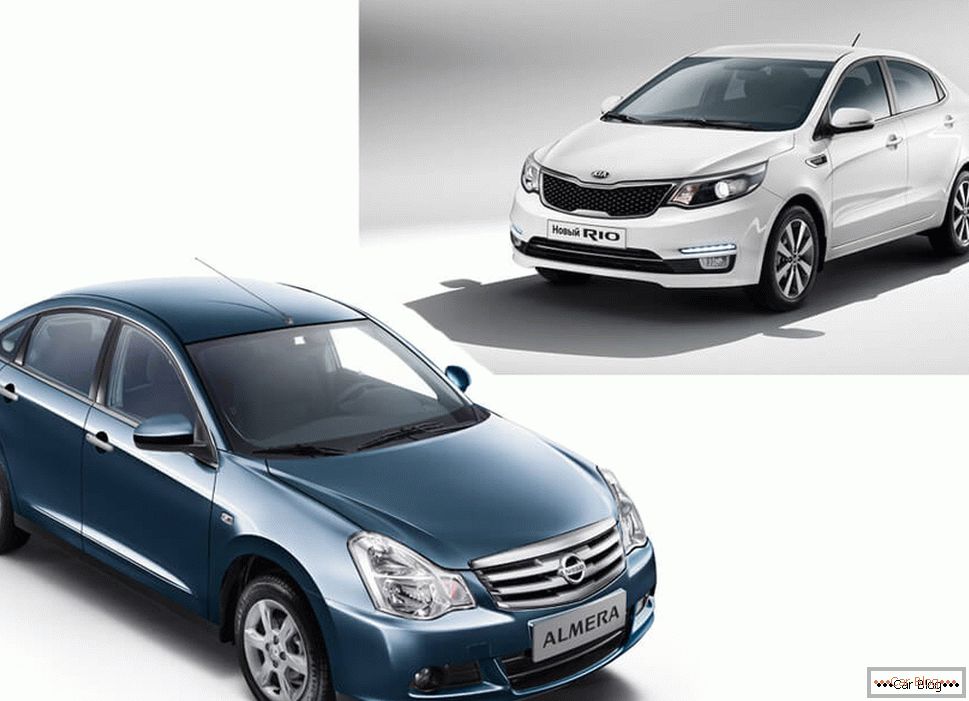 The very fact that there is an “automaton” in the car makes it more prestigious in the eyes of our compatriots, not to mention higher comfort, as well as ease of operation in urban jams. The withdrawal from the Russian market of some manufacturers has significantly reduced the number of such models, but the most popular options are still available to domestic consumers - this is about the Nissan Almera and KIA Rio.

The matter of technology

The Japanese company Nissan developed its mid-size sedan, taking into account the Russian conditions of operation with their poor-quality fuel and the lack of spare parts for modern technology. That is why the Nissan Almera is equipped with far from the newest 1.6-liter unit, whose power is only 102 horsepower. To call the car the main slug in its class, you do not even need to make a comparison with Kia Rio and other competitors. It takes almost 13 seconds to accelerate to the “hundred” Nissan Almera with an automatic transmission - its dynamics is comparable to domestic Nines. 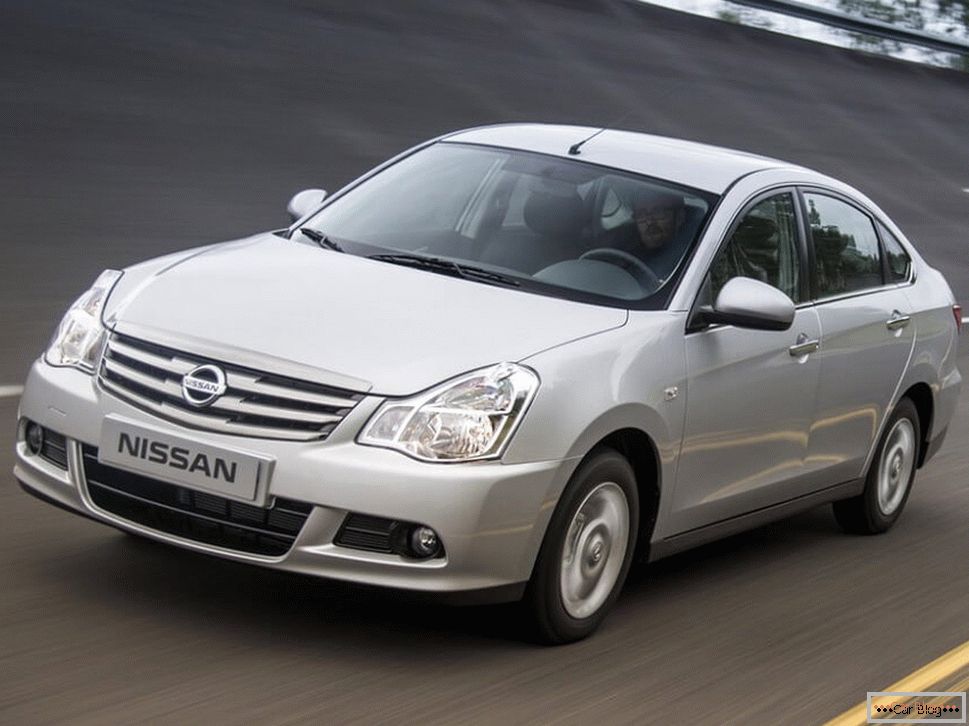 The second significant drawback of the Nissan Almera is the excessively high fuel consumption, which, with dynamic driving through the city streets, can reach up to 12–13 liters / 100 km. This is due to the archaic four-stage Nissan, which does not go to another level for a long time even with measured driving - as a result, the engine has to constantly work at elevated speeds. However, if you distract from the weak dynamics and increased fuel consumption, and just relax, you can see that the power unit of the Nissan Almera has an undeniable advantage, represented by a good traction at low speeds.

Of course, the Nissan Almera engine is difficult to keep the car in a fast-moving stream outside the city, but it very smoothly and quickly accelerates the car from the start, allowing you to quickly respond to a change in the situation in the mash. In addition, Nissan has not for nothing made the decision on the use of such units - the motor and the "automatic" are absolutely unpretentious to the conditions of operation, as well as amenable to repair in almost every workshop.

But Kia clearly tried to make its compact Rio sedan so high-tech, as the budget allocated for the development of the new model allowed it. The power unit of the Kia Rio has the same volume as that of the Nissan Almera, but develops 123 horsepower, and also has the best traction at medium and high rpm. Together with him, a classic hydromechanical "automatic", having 6 steps. 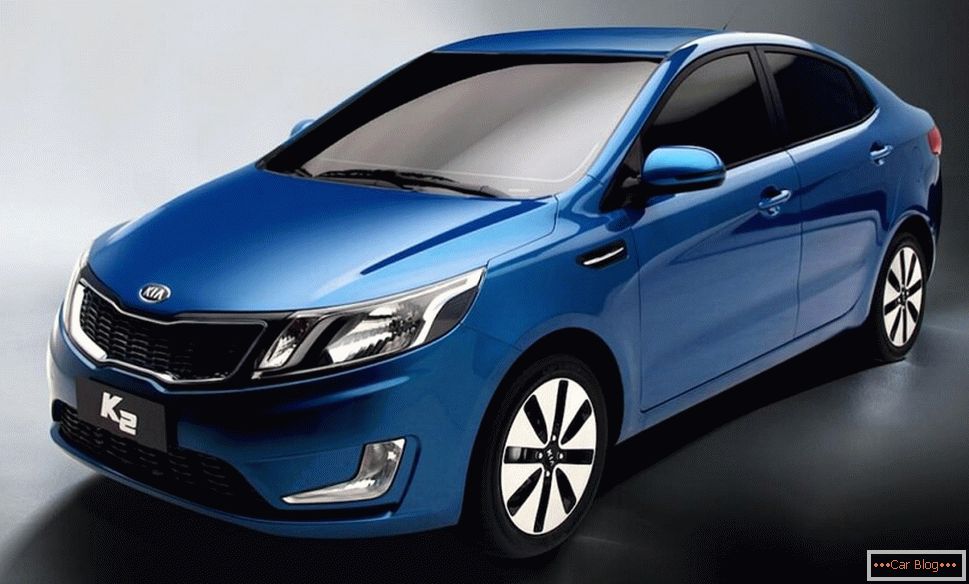 The Korean transmission on the Kia Rio works very clearly and logically, but when trying to achieve a "kickdown" by sharply pressing the gas pedal, it seems that it takes a couple of seconds to think and only then selects the right gear. When overtaking on the highway, this feature of the Kia Rio gearbox does not really hinder the driver, but in the city it makes it difficult to perform many maneuvers.

Indicator acceleration to 100 km / h in Kia Rio corresponds to the average values ​​for modern small car - the car takes a little more than 11 seconds to overcome this threshold. When driving in the city, the car also often turns to high engine speeds. However, the reason for this is not the archaic construction of the “automaton”, as in the Nissan Almera — just the low thrust of the Kia Rio motor forces the driver to press harder on the gas to keep up with the flow. Fortunately, this does not lead to a sharp increase in fuel consumption - in most cases, the Kia Rio is 7–8 liters / 100 km.

Salon Nissan Almera at first glance makes a rather depressing impression - it reminds more of the Romanian-French Renault Logan, than of other models of the brand Nissan. Here, the simplest devices coexist with a primitive on-board computer, an angular multimedia system module on the center console, inexpressive round deflectors and an archaic plastic head for the transmission mode selector. 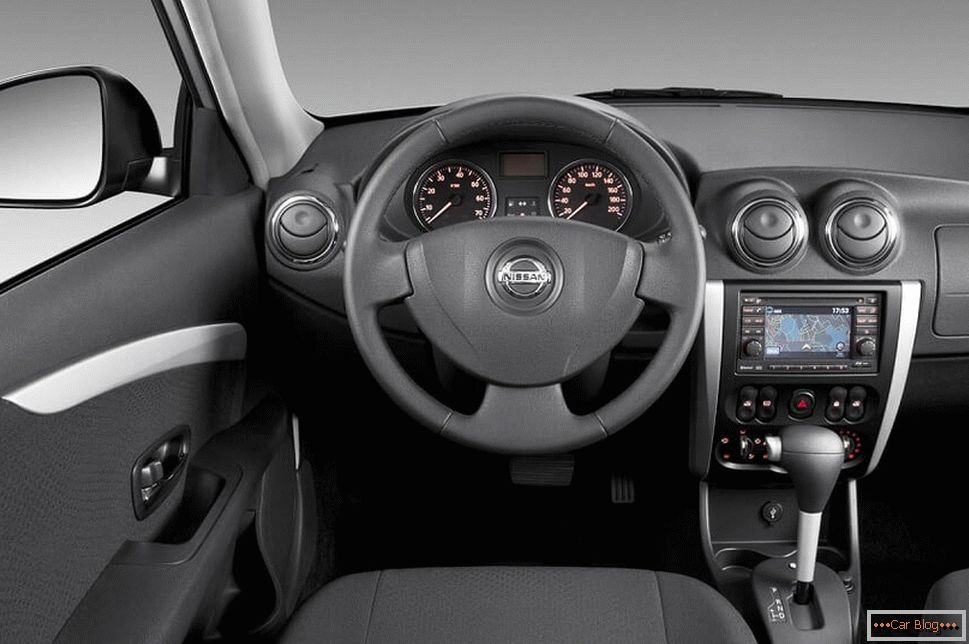 However, this simplicity can be forgiven Nissan Almera for the spaciousness in the cabin, comparable only to business class cars. If desired, the Nissan Almera will be able to use middle-ranking executives as a service vehicle - the distance between the two rows of seats is so great that passengers sitting in the back can work with full-sized laptops or large tablets. The front of the Nissan Almera is also very spacious, but the seats are much better adapted to the needs of large people - very weak lateral support and the flat shape of the pillow make others feel somewhat uncomfortable.

On the go, the Nissan Almera is also pleased with its desire for the upper class, since the car quietly passes through even large irregularities, almost without annoying its passengers with shaking and clanging suspension. The calmness of the chassis of the Nissan Almera can only be shaken by speed bumps, high rails, and long waves of asphalt, on which the car body begins to sway unpleasantly. The price for comfort in a mid-size Nissan sedan is mediocre handling. Almera is prone to deep rolls in corners, which causes the driver to slow down with active maneuvering. In addition, the sensitivity of the steering Nissan Almera also leaves much to be desired, which spoils the pleasure of comfortable movement.

Despite its simplicity, the cabin of the Kia Rio, after meeting with the Nissan Almera, looks like the cabin of a spacecraft. The driver is struck by the devices with bright lights, located in deep wells, as well as the center console deployed to the steering wheel with a multimedia system screen and a compact display of the climate system

adom.ru. In addition, the interior of the Kia Rio attracts the attention of a two-stage front panel layout, in the decoration of which plastic of different colors is used. 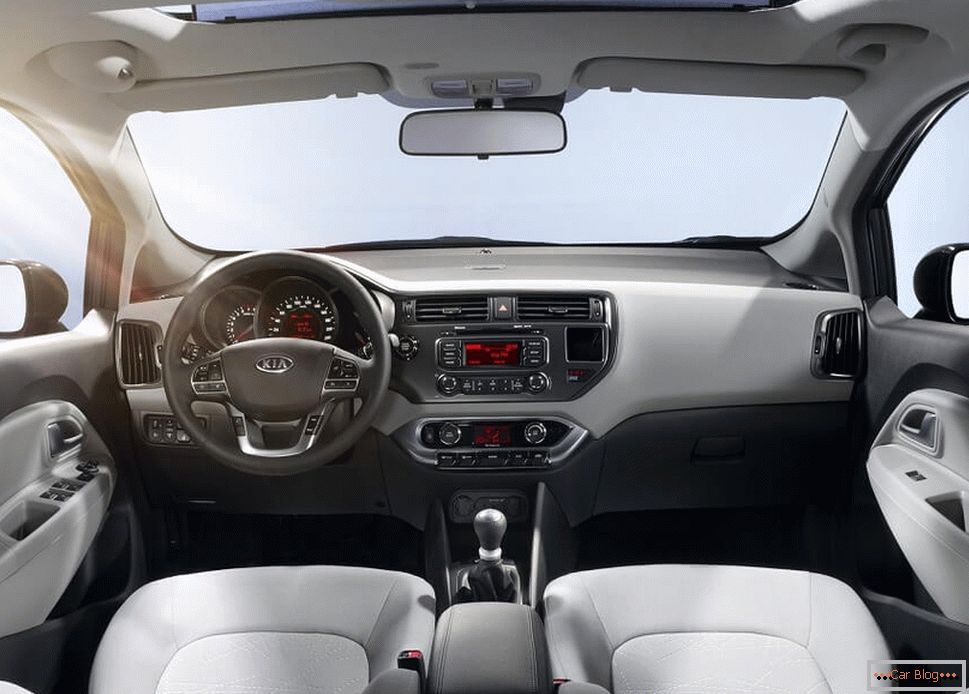 However, in the area of ​​comfort, the Kia Rio is much inferior to the Japanese sedan Nissan Almera - passengers sitting in the back, do not have enough space above their heads, due to which tall people take a position uncomfortable for a long trip. The front seats of the Kia Rio are pleased with moderate stiffness and good lateral support, but they upset the small length of the cushion that makes the driver and passenger sit with their backs straight, constantly straining their muscles.

Suspension Kia Rio pleases great energy, which avoids breakdown even when passing "speed bumps". In addition, Kia Rio is superbly controlled - the driver feels feedback on the steering wheel and can predict the behavior of the car long before the maneuver. However, the chassis of the Rio will seem overly stiff to many. It makes passengers startle even when passing small cracks in the road surface, and also annoys a strong knock during overcoming larger irregularities. The stiffness of the Kia Rio suspension is a necessary measure to improve the car’s handling with the simplest twisting semi-dependent rear axle.

It begs a simple conclusion. Nissan Almera is ideal for the role of a company car, which will be managed by a hired driver. In addition, the acquisition of Nissan Almera will be justified for people living in the suburbs or in regions remote from large settlements, because the machine is able to provide excellent comfort even when driving on roads with poor quality surface.

But the Kia Rio with its refined handling, but an overly stiff suspension is better to acquire residents of large cities. Kia Rio is great for driving along the main streets of the city, as well as on a country road with a smooth surface.

The mid-size Japanese sedan Nissan Almera will delight its owner not only with a spacious interior, but also with a spacious trunk. Capacity of 500 liters is enough for the transportation of baggage of four to five passengers traveling on a long journey or to deliver small household appliances from the store. However, the use of the cargo compartment in the Nissan Almera is not too convenient, because to increase its space you will have to completely remove the rear seat backrest. 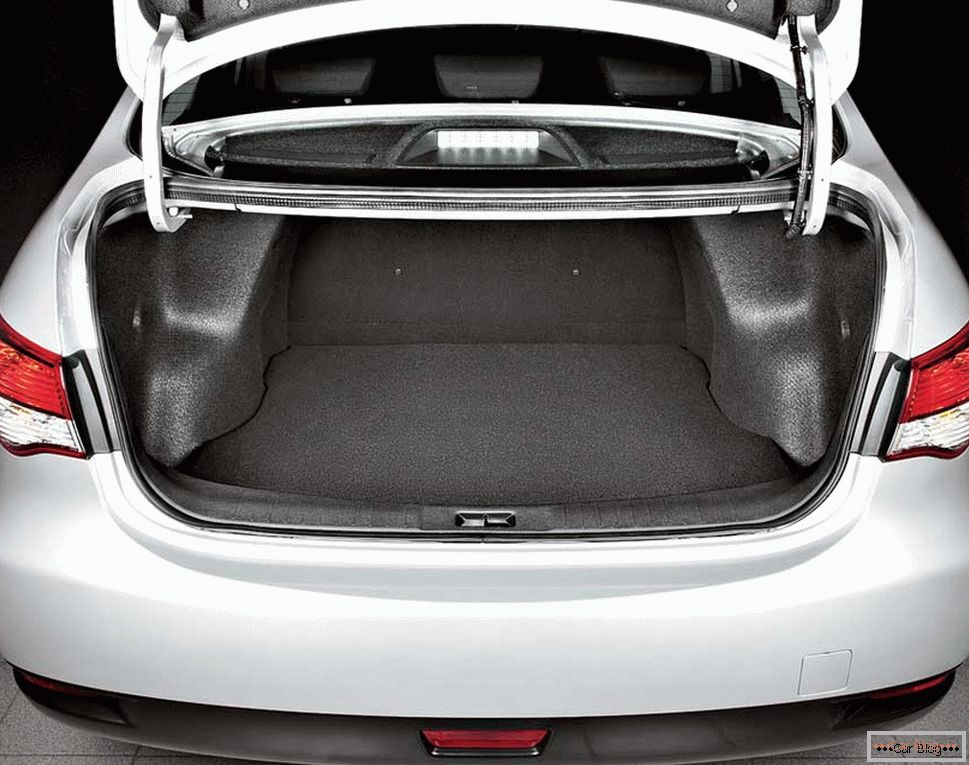 In pursuit of cheaper cars, designed specifically for Russia, Nissan experts abandoned the transformation mechanism of the cabin. As a result, the Nissan Almera can carry only one passenger if there is a bulky cargo in his trunk.

The comparison shows that the Kia Rio is not inferior to its Japanese competitor in terms of cargo space by one liter, despite the shorter body length. In addition, in the cabin of this car there is a full-fledged transformation mechanism, which allows you to lower the seat backs in the proportion of 40:60. Thanks to this, a large TV or other purchases from the store should be transported to Kia Rio. However, it has its drawbacks, which are represented by a small width of the trunk, a large loading height and the presence of a step formed when the rear seat is folded. 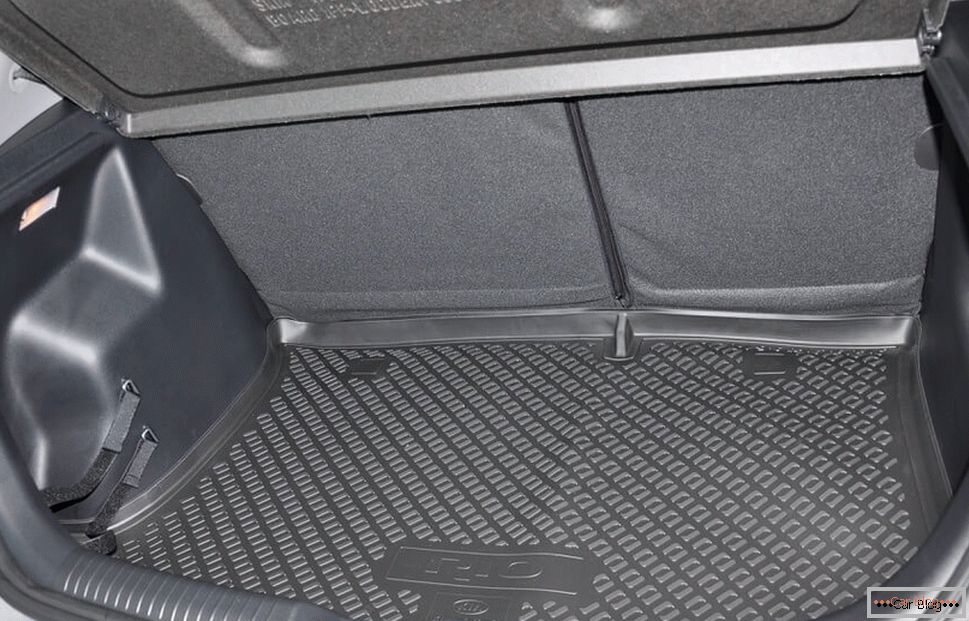 Therefore, the Kia Rio, although ahead of the Nissan Almera in terms of ease of use of the cargo space, still cannot be considered a leader in this field.

Japanese sedan Nissan Almera - is the perfect option for the average Russian city with a population of less than 500 thousand people. It is capacious, well prepared for roads with poor-quality coating, but lags behind the modern design trends and does not take the lead in terms of ease of operation. But the more compact Kia Rio is suitable for ideal roads of big cities and country roads - its excellent handling is somewhat set off by the excessive rigidity of the undercarriage. In addition, the arguments in favor of the acquisition of a machine may be as follows:

How to get the rights of category m

Rating of ukrainian sites for the sale of cars

Nissan, controlling today mitsubishi, is going to release a