Audi q5: before and after restyling. what has changed in the

Crossover audi Q5 joined the lineup of the German car manufacturer relatively recently, in the fall of 2008. 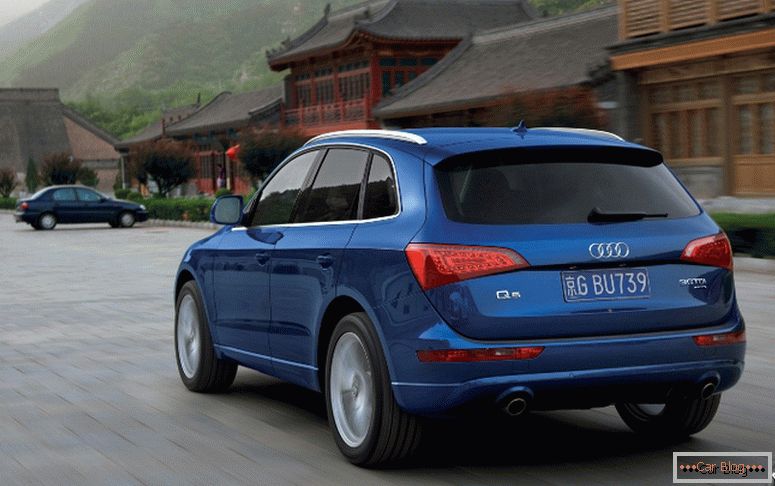 A solid native of Ingolstadt was able to compete with the high position of foreign cars Mercedes GLK and BMW X3 at that time.

Developing a concept for their new products, Audi designers did not set themselves plans to move away from the traditional style attributed by the company. Compared with other brands of crossovers, this kindred affiliation, on the contrary, can be justified as an original solution, which is instantly felt when attention is focused on a large trapezoid radiator grill that goes beyond the license plate and continues up to the bottom line of the front bumper. Well recognized as the rapid form of the body with a coupe-shaped roof and eye-catching silhouettes of branded optics.

Dynamism in the image of the audi Q5 is brought LED lights on the stern of the car and organic cutouts on the sides along the doors.

The platform of the new Q5 is the same constructive base that we saw in the A4 family and the A5 coupe (if necessary, you can refresh the list of all German car models, including the key Audi models). The so-called modular longitudinal platform (MLP) has a special layout of the engine compartment, in which the front axle shifted forward, and the power plant and gearbox sprang back, which favorably influenced the distribution of the center of mass and expanded the space between the wheels of the front and the front. Thus, the wheelbase was 2810 mm. As a result - an excess of free space along the length of the cabin. Three passengers in the back row will not complain of tightness or lack of legroom. Additional comfort in the cabin of the crossover will create the ability to adjust the inclination of the seats and not included in the standard functionality of their longitudinal movement of 10 cm in one direction or another.

The capacity of the trunk - 540 liters. Having sacrificed seats for rear passengers, it is possible to transport already 1000 liters of cargo more.

audi Q5 2008-2012 model years turned out more compact than the previous model in the series. Specific figures can be found in the characteristics of the crossover: length - 4629 mm, width - 1880 mm, and height 1653 mm. Less dimensions - less weight, and in this case, this formula does not lie. Q5 has become easier Q7 almost half a ton, thereby improving the aerodynamic qualities and improved handling. No wonder the car prescribed a record for the best indicator of aerodynamic drag, demonstrated in its class. If the class of the vehicle was determined only by this indicator, then Q5 would have to be attributed to cars. 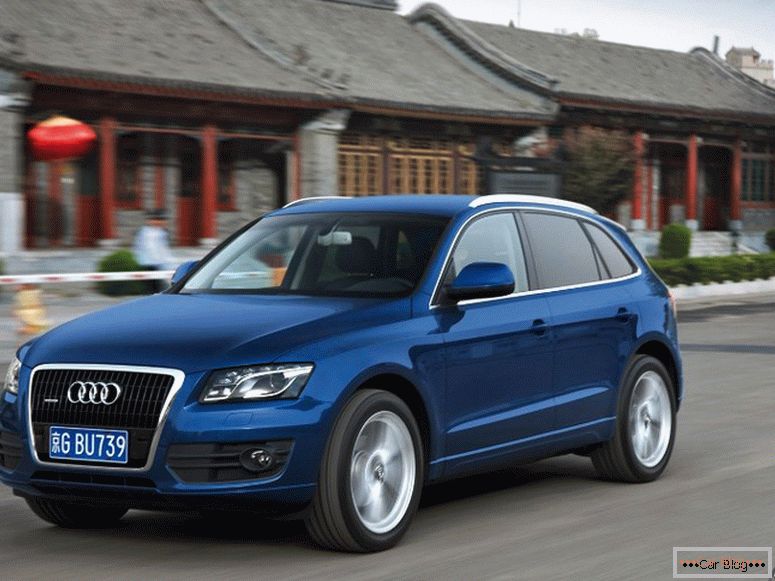 On the trip, comfort for the driver and passengers is provided by comfortable seats with fabric upholstery, with good support and adjustable position. The interior is decorated in the style of gentlemanly chic, which mixed the most worthy materials, including expensive wood, delicate leather elements, and shiny metal inserts made of chrome and aluminum. In a word - premium class.

In order not to offer customers a stripped-down version without such important components as an audio system with speakers, climate control, an opening system using a chip key, or the same electromechanical parking brake, the manufacturer decided to include all these functions as standard. The onboard computer is controlled from a convenient keyboard with large buttons, and for visual control a full-color display is mounted on the central panel. It does not say that audi Q5 цена too overpriced - on average, the machine costs 2 million rubles. 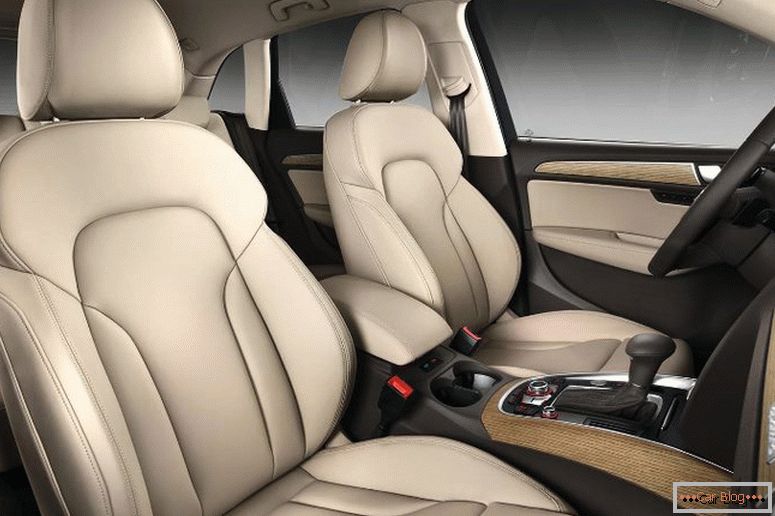 With the gradual modernization of its audi Q5, those who have purchased the basic version will be able to play a lot, the benefit of the equipment for this is provided by the manufacturer in abundance. For example, you can upgrade the climate control system to a three-zone version, install a system for monitoring air pressure in the wheels, get a new electric glass panoramic roof, or install an electric drive on the trunk lid. You can also improve the side windows with sun shades or equip the car with swiveling headlights with adaptive light.

On the constructive part of the basic version of the Q5 crossover of past years, we are offered a drive on both axes and an asymmetrical center differential Torsen. By default, the distribution of force between the axes is built in the ratio of 40:60. The system responds immediately to wheel slip, due to which a redistribution of efforts occurs - up to 85% of power can go to the rear axle of the suspension, and the front, in turn, can reach 65 percent. This means that the crossover, not designed for movement on snowy and eroded sections of the route, in spite of everything, has a decent margin.

The ground clearance of the Q5 is average for the crossover - 200 mm, so that, struggling with the elements, the car will be able to overcome water obstacles with a maximum depth of 50 cm and enter the hill at a fairly steep angle of 30 degrees. 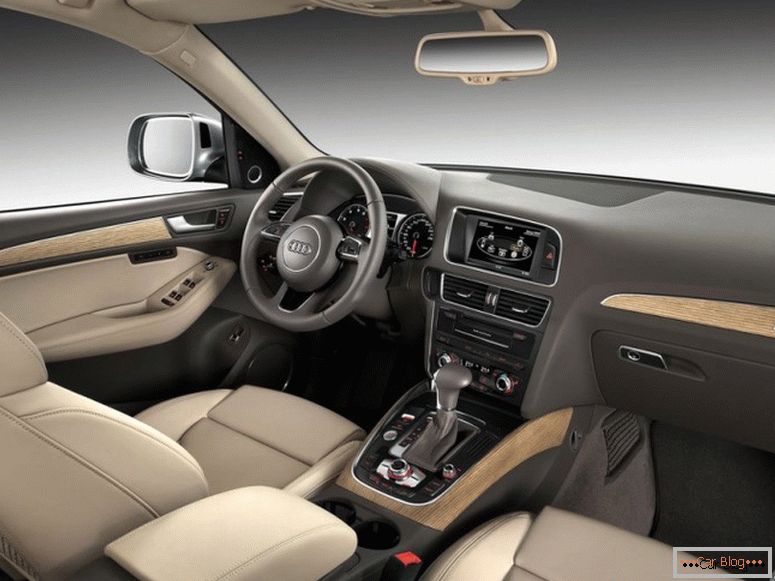 Pre-styled version audi Q5, was produced since 2008 with one of the three power plants. Both diesel engines and a gasoline engine operated with turbocharging and direct fuel injection. We offer to get acquainted with the characteristics of these units and the possibilities that they realize:

The transmissions were distributed as follows: for a gasoline engine and the most powerful 3-liter diesel engine, a 7-speed dual-clutch gearbox was prepared, but the latter acquired a 6-speed manual transmission. It will be appropriate to note that the gear shift does not affect the smoothness of the car, that is, it happens almost imperceptibly, without jerking and shaking. 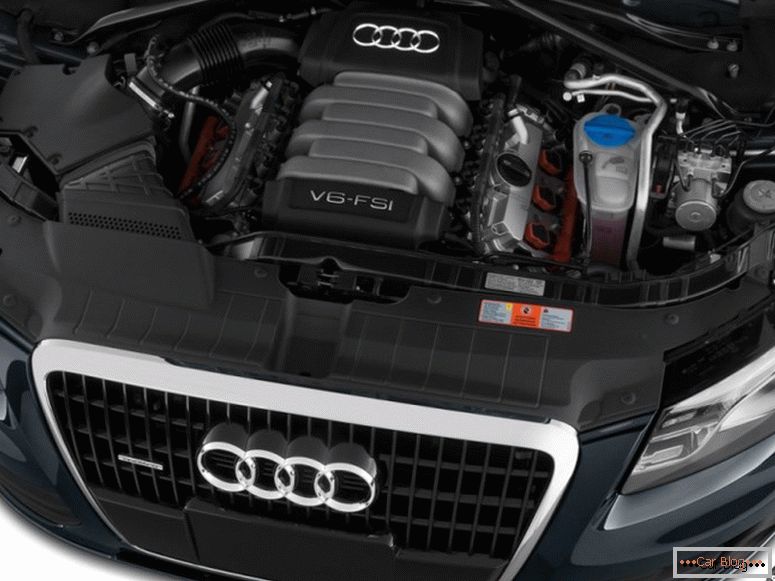 There should be no complaints about the safety level of audi Q5. As you know, more than 5 stars in the Euro NCAP test can not be obtained. The highest score was achieved by means of three-point seat belts, which are equipped with all five seats, seven excellent-quality pillows, Isofix child seat fasteners, and a considerable list of active systems.

First of all, in the cabin of the Q5, safety is ensured by the seats with an optimized design, moreover, it was not for nothing that a head restraint system was provided. The base of the crossover body has a shock absorbing structure. The fuel tank was transferred to the protected area, and immediately after the collision signal was recorded, the fuel pump automatically shuts off. 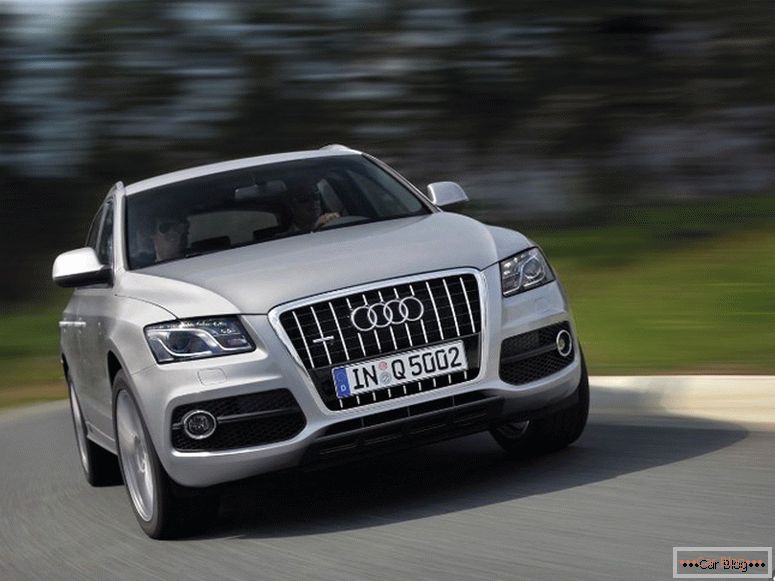 audi Q5 photo - on the move

When buying a car, you can “stuff” a whole set of auxiliary systems. Stability will delight with additional modes that will be especially useful on the roads - this is Off Road mode, side stability assistant and helper when descending from steep obstacles. If you list other systems, it will be ABS, ASR, EDS and Brake Assist.

Accustomed to the rules of road safety is the Lane Assist system, which tracks the road markings and stops each attempt to change lanes with a vibrating signal without turning on the turn signals.

Audi Side Assist is another useful system in the context of active movement, which by blinking light indicators warns of a moving object entering the “dead” zone. 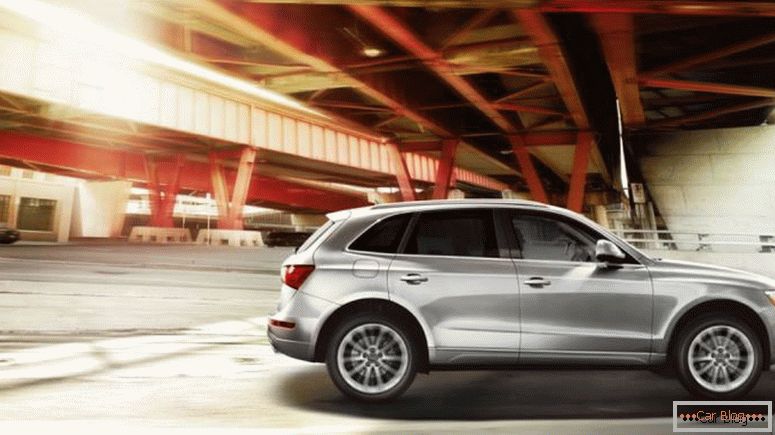 When the Internet began to appear фото audi Q5, different from what we saw until the end of 2012, it became clear that imminent restyling was coming. And indeed, at the near Paris Motor Show debuted an updated version of the mid-size crossover.

Four years without changes foreshadowed serious changes in the appearance and interior of the car. In fact, from what is visible from the outside, both bumpers were corrected, the head optics and rear signals were changed, and the grille was slightly modernized. All reforms were aimed at giving the car a sporty style. The restyled Q5 color palette has been replenished with four new shades. 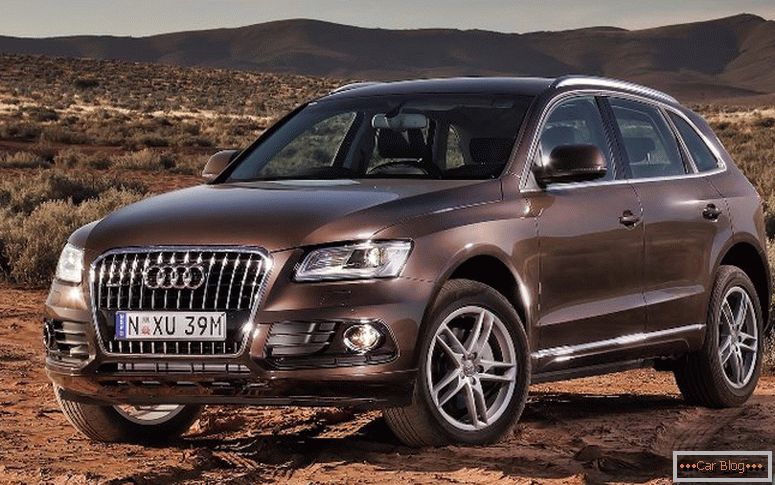 Driving performance has been improved by partially reworking the technical equipment of the updated model. These are mainly new springs and shock absorbers in the suspension, as well as power steering instead of an electromechanical system.

As for the Q5 engines, their new generation has become more economical in terms of consumption, as well as the corresponding current environmental standards. In many respects, the innovative start-stop system, which reduces the average consumption of gasoline by 15%, influenced the consumption of gasoline units. For example, a 177-horsepower gasoline engine with an SCPO automatic transmission requires about 6 liters of fuel per 100 km of track.

You can talk about the audi Q5 to infinity. In order not to leave any understatement, we suggest finding out more facts from the car's video review: 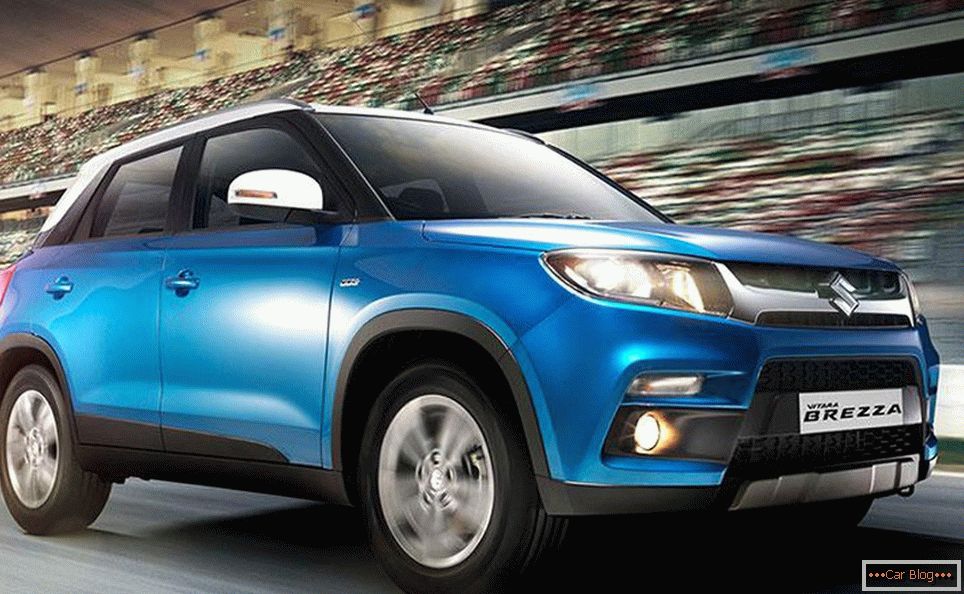 The japanese will launch the maruti suzuki brezza compact 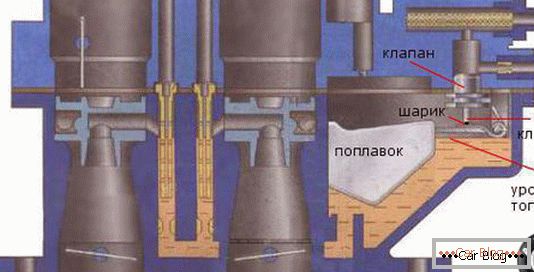 Deprivation of driving license for the use of alcohol and