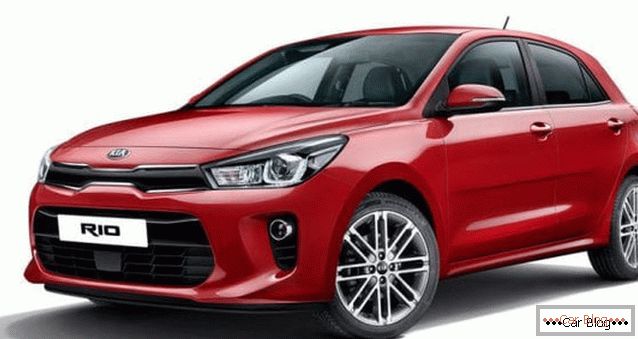 The KIA RIO model is represented in one of the most saturated market segments, so the Korean engineers had the difficult task of ensuring the competitiveness of their model.

The presentation of KIA RIO was held in October 2016 in Paris. According to the results of 2016, the model accounted for 15% of all brand sales, or 450 thousand copies, indicating the importance of the car for the manufacturer.

Appearance and specifics of the new Kia Rio

Under the conditions of the model representation in all markets, specialists from the European, American and Korean divisions of the company were simultaneously involved in its development, which made it possible to create an organic model that left a solid impression. 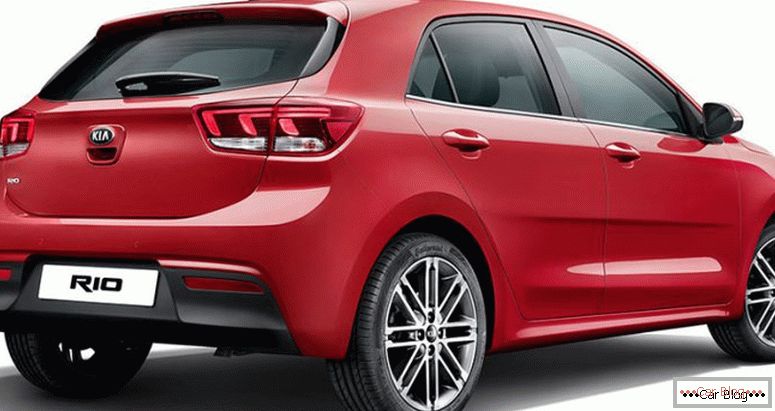 On the background KIA RIO 3 generations, the novelty turned out to be much more attractive, with a tiger nose style grille. Due to the significant length of the hood and front overhang appearance acquired more dynamic contours. The wheelbase of the car is now 2580mm (+ 10mm). Overall body length increased by 15mm (up to 4065mm), and the height was slightly less.

In Europe, the model will be presented in eight different body colors with a choice between three sets of disks of various sizes and designs.

Modern appearance offers and interior design model. Simple in form, but quite modern “tidy” offers convenient access to all the necessary information reflected on two large dials and a digital information display between them. 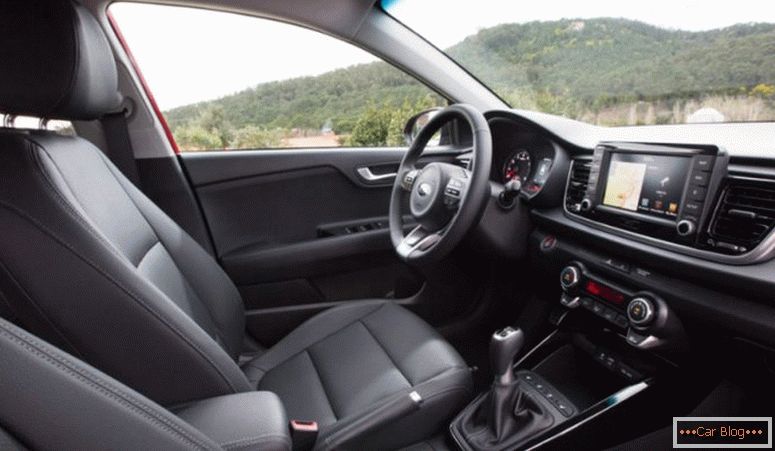 With impressive dimensions, the steering wheel is distinguished by its comfortable shape and pleasant tactile sensations. The on-board computer provides the driver with all the basic parameters in an easy-to-read format.

Most of the management of auxiliary systems is concentrated in a multimedia complex with a display diagonal of five or seven inches, depending on the configuration. Part of the functionality is displayed on the standard buttons, presented in a small amount. 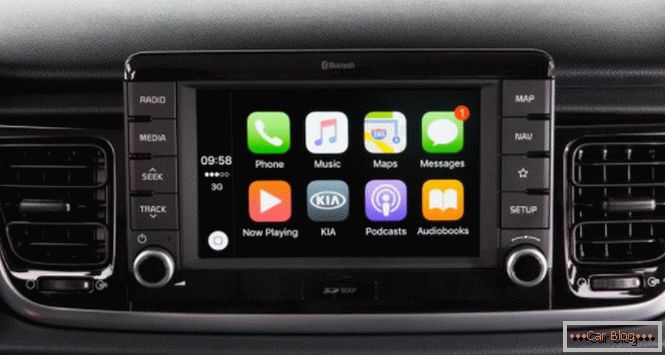 The display shows information from the rear view camera and the KIA RIO 2017 navigation system if there are similar systems in the selected configuration. It is envisaged for the new multimedia and connecting mobile devices to it. 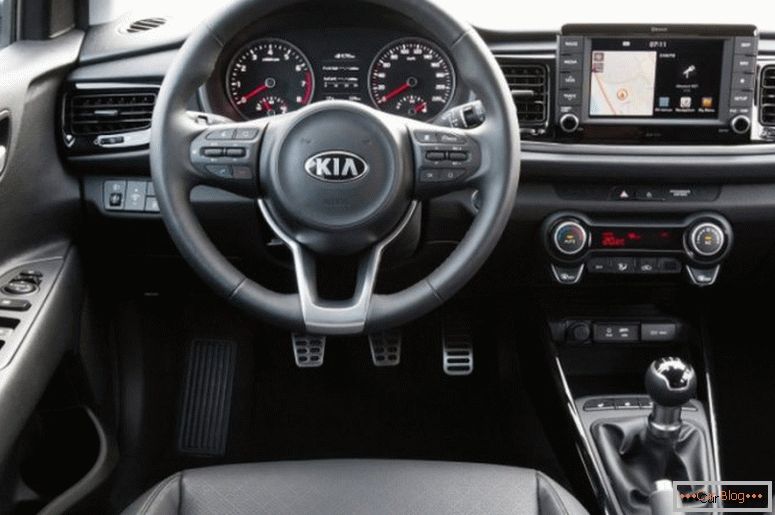 Climate control is concentrated in a separate unit under the multimedia display, the main connectors for connecting external devices are even lower, there is a small niche for small things and the control buttons for heating the front seats and the steering wheel.

Integration with devices based on Android or iOS allows users to display work with smartphone applications on a large display in the cabin. On European versions of cars there is also access to Google Maps, voice control and the ability to transfer phone calls to speakerphone mode.

The increase in the size of the car had a positive impact on the degree of spaciousness in the cabin. For example, rear row passengers now have 850mm of space in their legs. More space has become in the area of ​​the head. The excellent height in the cabin allows you to not feel any discomfort to people with medium height. 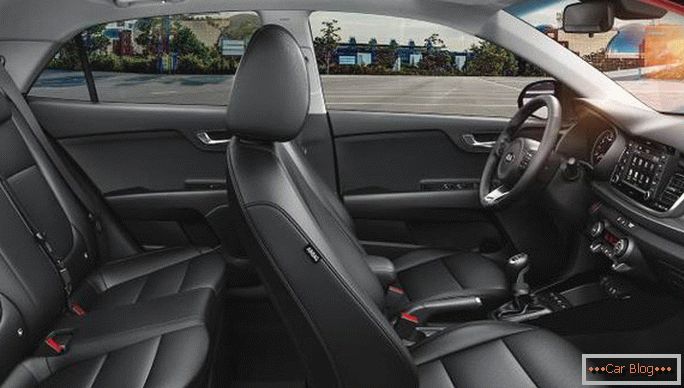 Comfortable seats have high-quality lateral support and are adjustable in three planes. In addition, you can adjust under the driver and the steering wheel, changing the departure or angle of inclination. The tunnel does not interfere with the average passenger rear sofa, but for three adults on the second row will be cramped, do not forget that the new KIA RIO is a compact B-class.

Improved on the model of new generation and visibility by reducing the thickness of the rear pillars and the transfer of side-view mirrors. 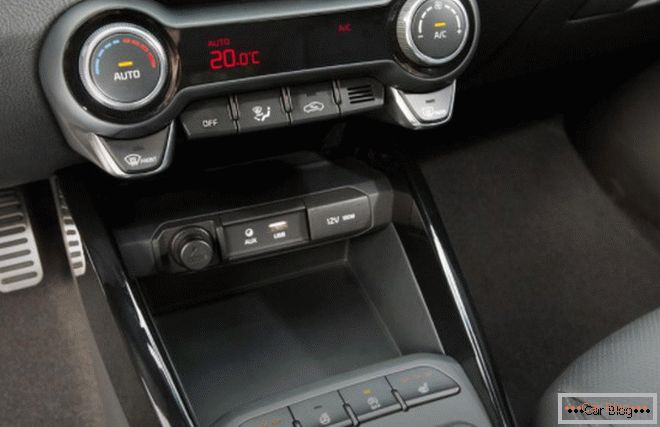 The cabin has a sufficient number of different niches, for example, there are containers for storing water bottles in the doors, a couple of cupholders are available for front passengers, and an armrest with an additional niche inside is optionally available. 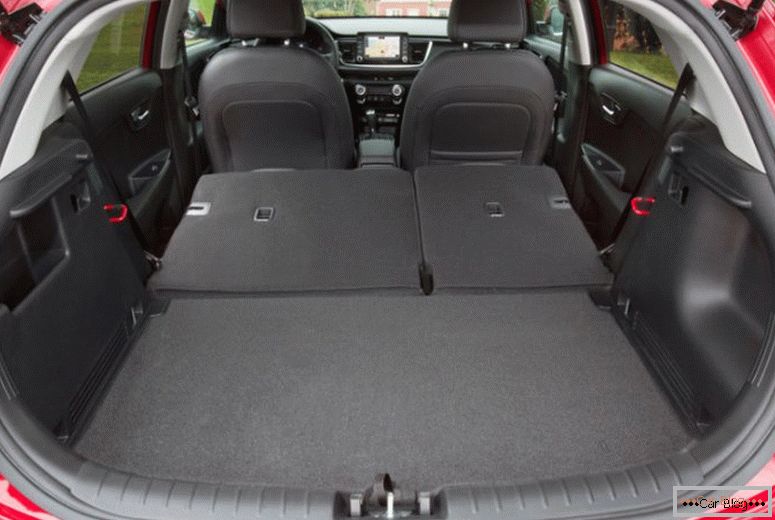 The luggage compartment for the hatchback is 325 liters, which is a record figure among all classmates. According to this indicator, the model exceeds the predecessor by 37 liters. The floor is two-level, which is implemented for the first time for RIO. The back of the back sofa folds in the proportion of 60:40, which allows you to carry a variety of dimensional cargo. 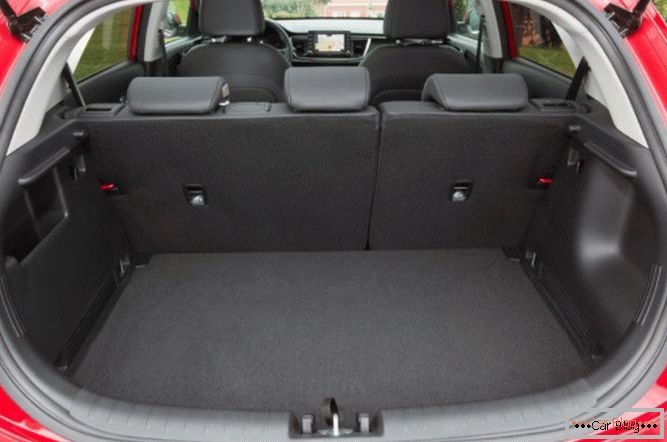 For European buyers, KIA RIO is offered with a repair kit, while in the Ukrainian market there is a spare wheel ("dokatka"). Increasing the fuel tank by two liters (up to 45 liters) allows you to increase the range by 35-60 kilometers, depending on the mode of operation.

Recommended article: Hyundai ix35 and That Sportage in the secondary market: what are the problems with these models

Korean engineers paid considerable attention to safety. For example, the AEB system, which is able to recognize pedestrians and independently stop a car, is for the first time available to the B-class. There is also a system that monitors the observance of rows on the road, warning the driver that he is rebuilding without the turn signal included. The latter, like the stabilization system, may be deactivated in the forced mode.

Already in the database KIA 2017 received a VSM stabilization system, the braking control system when driving in corners and the stabilization system with sudden braking. All this significantly increases the active safety in motion, and allows you to level some of the driver's flaws. Similar we have already seen in Kia Picanto

Sustainability for Rio is not just a word

The engines with high fuel efficiency were chosen as the power units for the model, and for the 1.0-liter 100-horsepower and 1.4-liter 77-horsepower engines it is possible to additionally use the LFC kit that increases the level of environmental safety of the car. It includes a start-stop system, rubber with minimal rolling resistance, running lights on LED elements, as well as other gear ratios. In addition, the clearance of a car with a similar package is reduced to 135mm (5mm less than the standard). 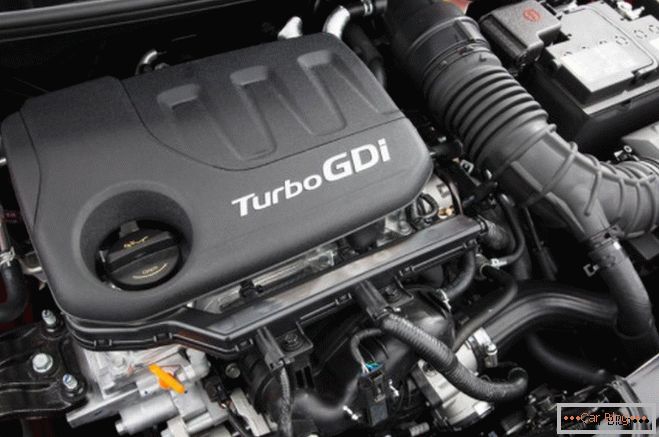 A turbocharged T-GDI engine with a cylinder volume of one liter for the RIO is used for the first time. The first to receive it was KIA Cee’d two years ago. The Korean brand guide expects that this engine will become the most popular among European car buyers.

The new unit offers not only the minimum consumption of fuel and the number of harmful emissions, but also due to the small mass it has a positive effect on the handling performance. Depending on the degree of forcing, its power is 100 or 120 forces. A peak torque of 172 Nm is achieved in a wide rpm range. The transmission with him is paired with a six-speed manual. With a measured ride, fuel consumption will not exceed 5 liters per hundred kilometers.

The engine with a return of 120 "horses" on the dynamics is practically no different from a less powerful fellow, so its presence is more of a marketing ploy than a real change in the capabilities of the hatchback.

The presence of a pair of "aspirated" with a volume of 1.25 and 1.4 liters is assumed. Their capacity is 84 and 100 "horses", respectively. The second engine offers very good dynamic performance, and creates a feeling of greater engine power than it actually is.

It is offered in a line and the diesel engine of 1,4 liters. Its performance is 77 and 90 hp. The engine has good traction characteristics, and surprisingly low noise, even less than the gasoline counterparts. Maybe the whole level of noise isolation is to blame. It is in this component that Korean engineers need to work more. Particularly problematic area are the rear wheel arches.

Clarity and accuracy of control

Car tests have shown its high handling. The city car has only 2.5 steering turns between the extreme positions. The new RIO successfully copes with a standard set of exercises (snake, acceleration-braking, and so on), demonstrating responsiveness and accuracy of control. The suspension behaves in a balanced way, coping with all the obstacles on ordinary roads.

We can say that the Korean engineers did their best, and it was difficult to expect from a state-owned B-class of this quality of controllability. 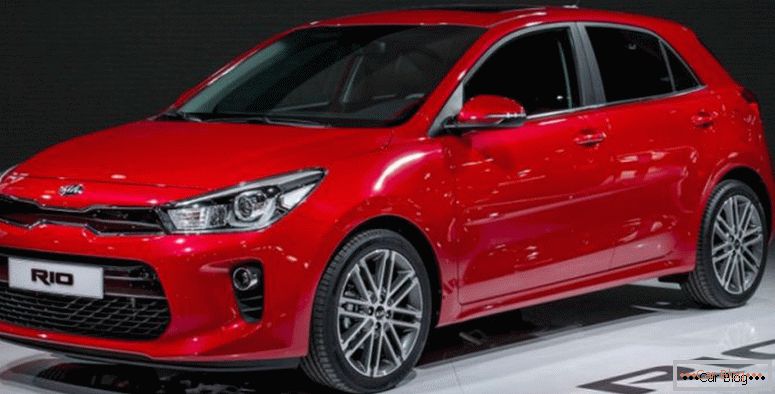 The results of the 2017 Kia Rio review

Summing up, it can be stated that the new generation KIA RIO offers a universal appearance designed for the maximum breadth of the consumer segment, as well as a wide selection of efficient engines. Good can recognize the level of equipment of the model, which includes all the basic options needed for the average driver. 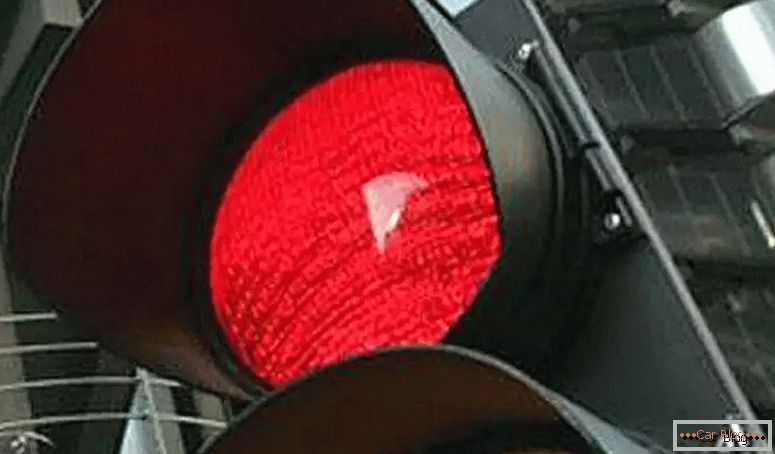 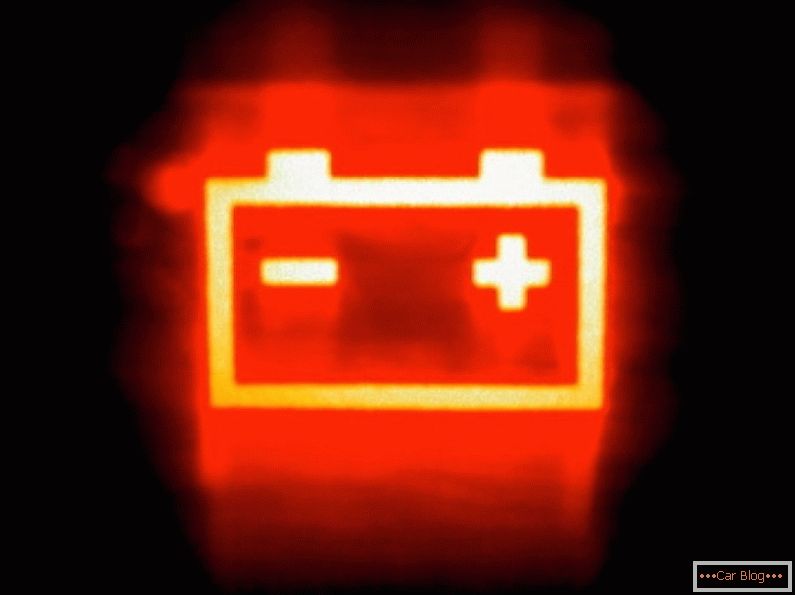 Preparing a car for the winter with your own hands