All about the car recycling program̆

The car recycling program is becoming a traditional tool for the Russian car market. The service gives you the opportunity to buy new cars, while receiving a significant discount for the fact that the old car is recycled. Motorists acquire a new car, and the domestic auto industry gets new customers.

The action of the next specialized recycling program ended in 2014. But interest in this method of changing cars from Russian citizens remained. More than once, questions were asked about the possible continuation of this practice in the current year.

Some time ago, Russian Prime Minister Dmitry Medvedev instructed the government to create conditions for the reception of worn cars. For this, it is necessary to carry out work to improve the legislative base in such a way that it meets modern requirements.

Necessary conditions for the car

The order of the recycling program has not changed. The conditions under which the car owner can replace the old car with a new one have remained almost the same. To take part in the program, you need to pass the vehicle to the point of reception.

The machine must be fully equipped: the engine must be installed, the transmission, the running gear must work, there must be seats, wheels and steering. 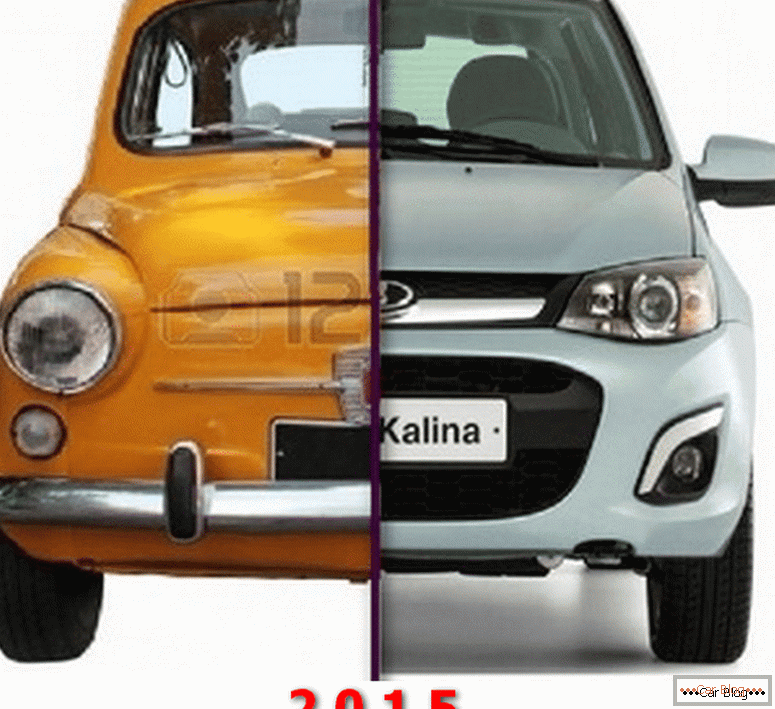 In addition to the conditions of physical condition, there are legal nuances of the transaction:

Disposal of old cars consists of several stages. It is necessary to begin with the bodies involved in the registration of machines. They will need to remove the car from the register. In this case, it is necessary to inform the employee of the service, for which the machine is deregistered. That is, to explain that it is planned to pass it under the recycling program. This will be the basis for the issuance of the certificate of the established sample.

See also: Do ​​I need a power of attorney for a car now?

After receiving a certificate, you need to ship your car to the point of reception. If the machine is unable to move independently, you can call a tow truck. 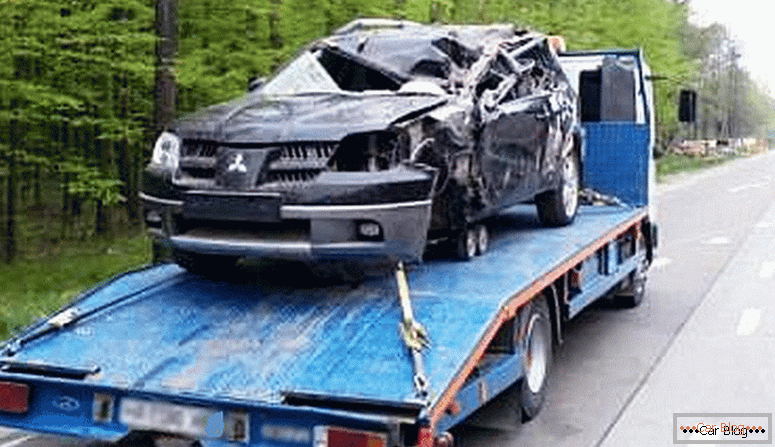 Transportation by tow truck for recycling

Some reception centers provide transportation services for old cars. It is quite expensive, but cheaper than calling a tow truck.

If the delivery is planned on its own, then move in the direction of the point of reception is a detour to busy highways. The restrictions imposed on the car, dictate their conditions.

At the reception point, you must first pay for the work of the press. It costs three thousand rubles. Then the documentary confirmation of the operation is carried out, and the client is issued a recycling act.

Before you go with him to a car dealership for a new car, it is important to carefully check whether everything is correct in it.

Dates must be true. All acts issued during the implementation of previous utilization programs are considered invalid.

The terms of the car recycling program in 2015 have their own characteristics. The main difference is the appearance on the market of new players by increasing the list of companies operating in the Trade-in scheme. These are intermediary organizations that will connect car owners with recycling centers, car companies. 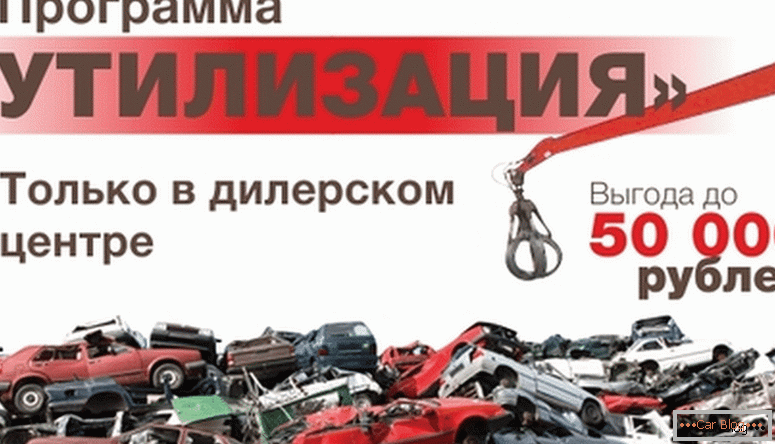 Several automakers declared their desire to take part in the program: AvtoVAZ, Citroen, Renault and Toyota. They are ready to give a discount on the purchase of their cars in the amount of from twenty-five to fifty thousand rubles. If a truck of domestic production is delivered to the scrap, the discount automatically increases to three hundred and fifty thousand rubles.

Innovations in the implementation of the project

The program will work for six months. Government officials believe that during this time about 170 thousand cars can be disposed of. Funding for the implementation of the program will be 10 billion rubles.

Innovation of the program is the ability to dispose of machines by force.

This is due to a legal ban regulating the presence in public places of cars in a disassembled form or simply abandoned. We are talking about cars that have stood in place for at least thirty days, or about cars without important details. 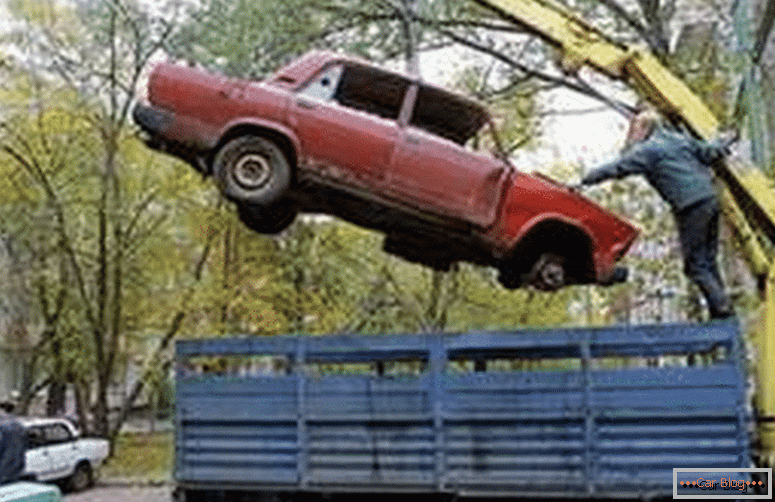 Their owners will be given a fine, and vehicles will be forcibly sent to recycling centers. In this case, car owners do not have the right to receive a discount.

See also: How to find out if the car is pledged or not

Flaws in the current program

According to experts in the country's car market, the new recycling program is not perfect. It does not correspond to the economic reality that has developed at the present time. For example, the amount of compensation has not increased compared with previous versions of the program. Therefore, the growth of the dollar and the euro will reduce the effectiveness of the project.

Cars have become more expensive, so car owners are in no hurry to take advantage of not the most advantageous offer. In this regard, AvtoVAZ has promised that it is not going to raise prices for its cars by more than 5% while the recycling program continues.

The idea of ​​attracting intermediary commercial organizations to work on the program is highly doubtful.

Experts fear that this may provoke frauds in the field of Trade-in. Corresponding "calls" have already been. Some dealers are starting to offer to resolve all issues with recycling, if they are paid a certain commission. 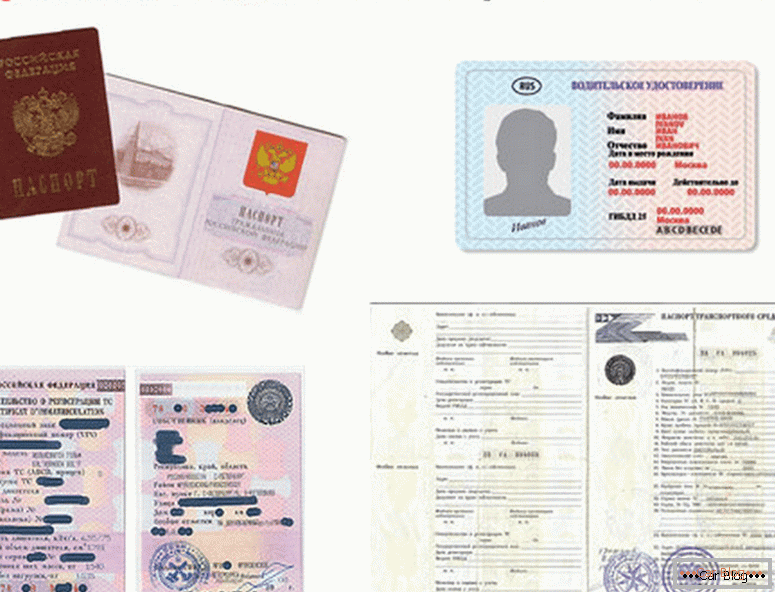 Journalists conducted independent investigations at the time when the previous utilization programs were being implemented. As it turned out, some participants had a distorted understanding of its principles. Sometimes the machines were not recycled, but resold by dealers. And this reduced the effect of the program, one of the goals of which is to reduce the number of old cars on Russian roads.

Many questions raise doubts among experts. This includes the extent to which it is expedient to apply state support in the automobile market, since the experience of other countries has already proved that there is no benefit from such incentives.

The short duration of the program makes car owners rush. In addition, the number of cars that car dealers are ready to implement under the program is limited. If everything is done on time, compensation will help save on the purchase of a new car. But the “substantial” discount can only be called for AvtoVAZ cars. 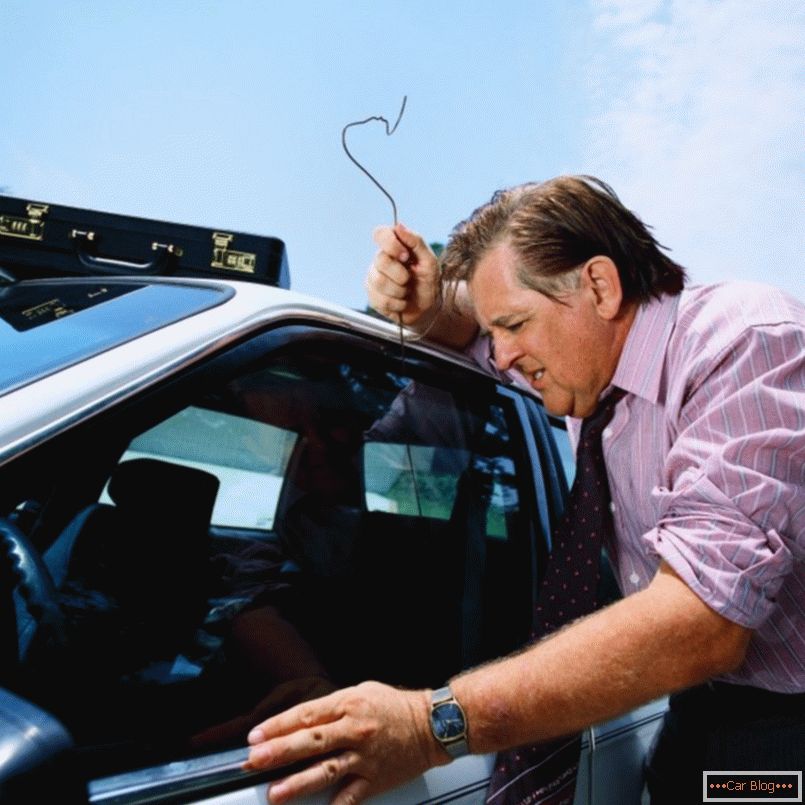 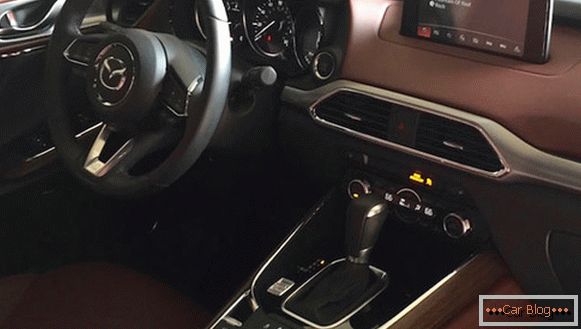 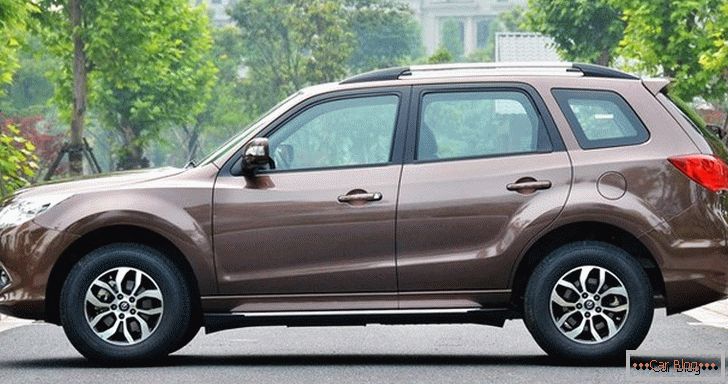 What kind of grease for wheel bearings better

The device and the principle of the automatic transmission