When to change spark plugs: after how many km

Truth is often in the specified interval. In this case, it is not necessary to conduct rash protracted experiments with the engine, so as not to cause irreparable damage to it. It is worth paying attention to the recommendations of the manufacturers.

Some drivers think why change the spark plugs, if the old ones work. However, their failure can damage not only the fuel system, but also the cylinder block, the repair of which will be very expensive.

The efficiency of the electrodes must be maintained during the entire period of operation:

Such violations can disable the well-established work of other systems. 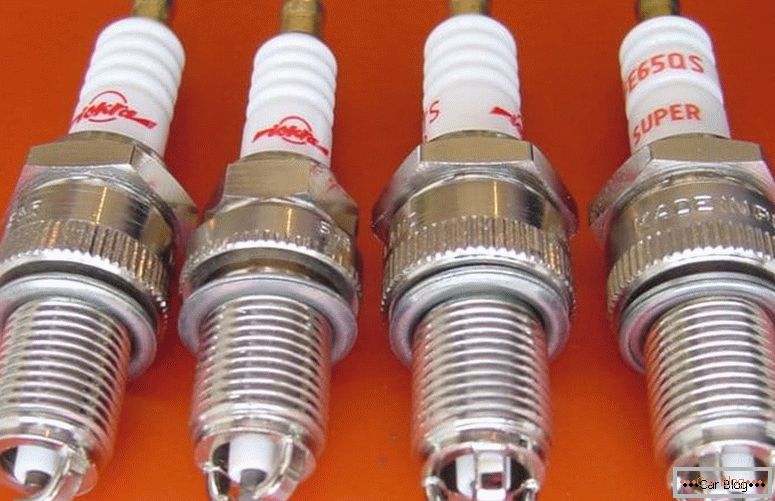 To figure out how much to change the spark plugs, it is important to know their purpose in the car. The basic task for them is to ignite the fuel mixture inside the working cylinders. The process starts from a spark arising from a sent high discharge between a pair of electrodes.

It is important to know that the voltage sent to the candles in different models of cars ranges from a few thousand to several tens of thousands of volts.

A charge is sent from the distribution coil. The resulting spark depends on the value of the technological gap between the conductive elements of the candles. Usually, the larger the gap, the more intense the formation of combustion in the ignition zone.

If it is not enough to ignite the fuel-air mixture, then during the compression stroke it will not fully burn. This will reduce the efficiency of the installation. It is important that the sparking drawdown be carried out in a timely manner, since a spark may not appear from a deposit or arise later, which will lead to incorrect detonation.

Unwanted detonation can lead to microcracks in the cylinder block housing or in the combustion chamber. As a result of its impact, a shock wave is formed, exerting an intense force on the basic elements:

During aggressive instantaneous (non-gradual) ignition of the mixture, a constant metallic sound will be heard. The power of the power plant is lost from this impact. The process is noticeable in the form of black smoke from the exhaust pipe. Such audio or visual signs answer the question of how to understand that it is time to change the spark plugs.

The car owner can independently control the condition of the main performance characteristics of candles, because they have a direct impact on the operation of the engine. When to change the spark plugs, suggest the following factors: 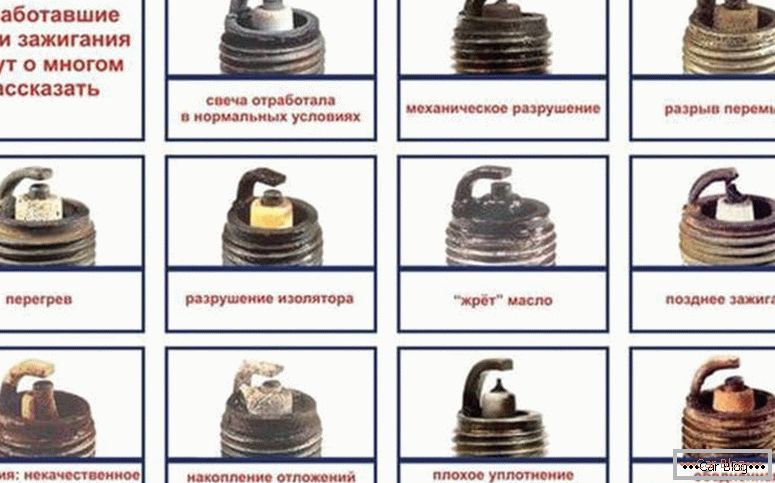 Self-diagnosis to identify potential problems helps to monitor the time needed to replace the spark plugs. There are several ways to do this. When the car does not start or starts with a delay, it is important to accurately identify the cause of the fault. If the result is a decrease in motor performance, this is a consequence of the uneven supply of a spark into the combustion chamber. Next appear intervals or spaces.

In the process of developing fuel increases the volume of vapor. Crude gasoline penetrates into the exhaust gas system, contributing to overheating of the catalyst and significant overload in its operation. Such an approach will necessarily have a negative impact on the work of the entire system and will lead to the mandatory replacement of candles.

It is important not to delay the replacement on demand, as unburned fuel in the exhaust system quickly disables the expensive catalyst. It is worth carrying out replacement according to recommendations of producers. Otherwise, the resulting carbon reduces performance by throwing out fuel.

See also: How to flush the engine when changing the oil

Allowable maximum mileage is limited by car candle manufacturers. This period is indicated in the instructions for use. 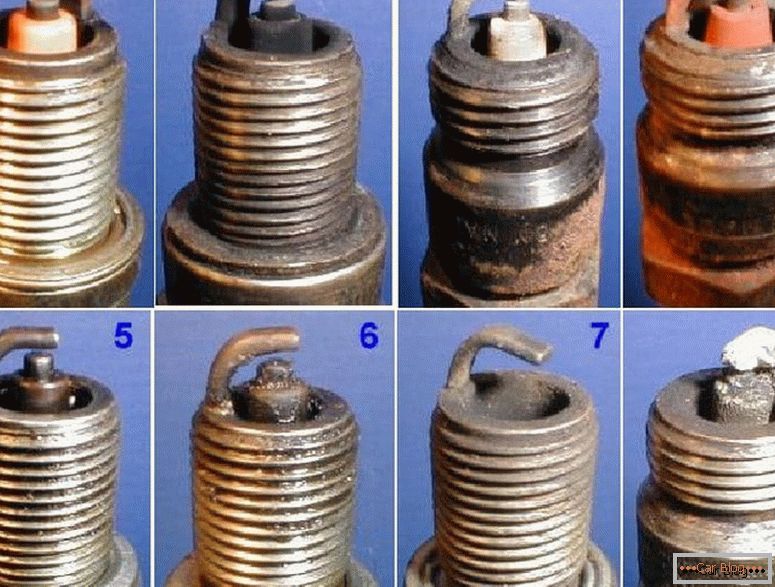 It is important to know that the preferred interval for replacing classic autogambs is 30 thousand km of run.

In the second-hand car you purchased, it’s not always possible to find out the installation date. In this situation, you should pay attention to the state of the products. Appearance will assist in determining the status of the replacement. It is worth exploring in detail each dropout for defects:

Recently, manufacturers produce new models, for example, platinum or iridium, capable of holding out up to 90 thousand kilometers. This is facilitated by the use of new technologies and materials in the design.

Also, the duration of use is influenced by indirect factors, which include the quality of the fuel used or the actual state of the engine. Do not install parts with damaged ceramics or cracks in the insulation. This facilitates the penetration of combustion products from the gap, which is reflected in the skirt and serves as a signaling device for the driver / mechanic.

When replacing it is worthwhile to install a whole new kit for each cylinder. This will prevent possible trouble. 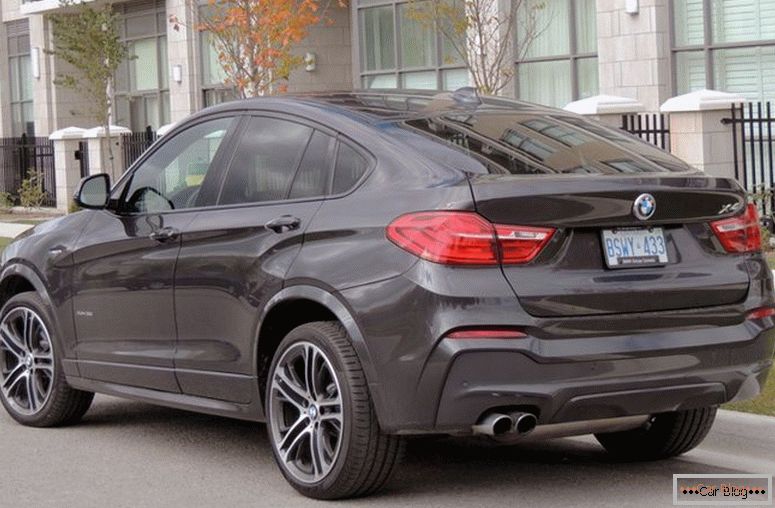 Bmw x4 vs mercedes glc coupe. who is better? 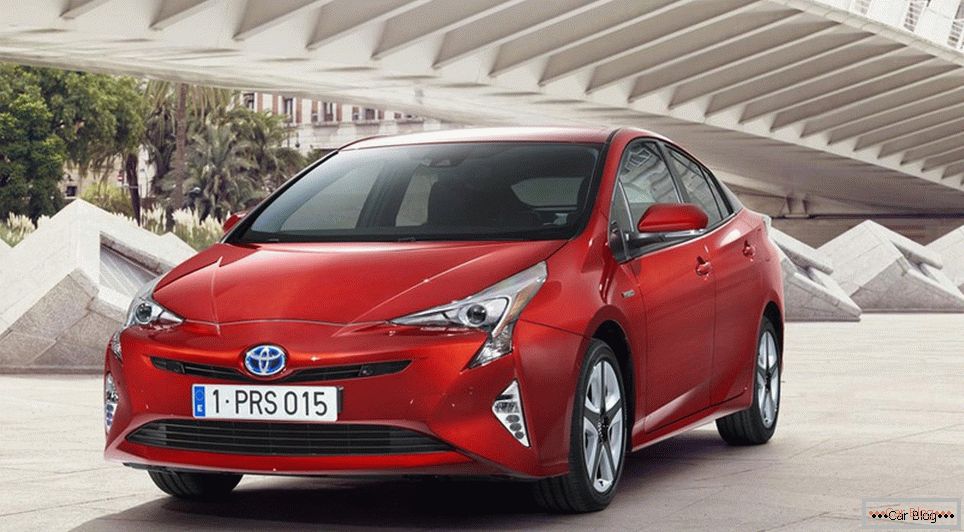 Tuning honda civic do it yourself without too much