A few years ago, SsangYong's SUVs might have been interested only in those who wanted to get a high-traffic car for a minimal price, without sacrificing too much quality. However, SsangYong Rexton became a refutation of such a stereotype - the car gives the impression of an expensive vehicle with its own proportions, the level of equipment and even the quality of interior design. But the cost is not very low - for the same money you can buy a mid-size crossover of a famous brand in the world. Maybe it is worth saving and buying a not so large SsangYong Kyron, relying on the presence of similarities in cars of the same brand? Our task will be to compare Rexton and Kyron, finding out whether it is worth overpaying for the most expensive model of the company sold in our country or whether you can get by with an intermediate option. 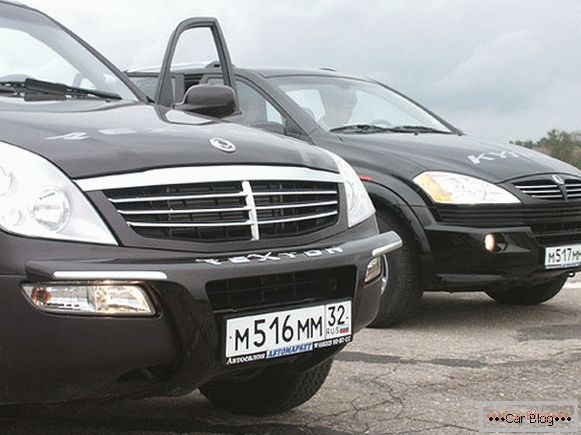 In the old days, SsangYong brand cars could be distinguished from other vehicles from a great distance - it was impossible to confuse with anything the jumble of completely incompatible stylistic decisions, sometimes contradictory. However, now the company employs foreign specialists, and it uses the services of the world's leading design studios, with the result that SsangYong Rexton has acquired a classic look, even more relaxed than what is required by fashion trends. The Rexton looks particularly advantageous from the side when the roof line, dynamically falling down, becomes visible, as well as the wide glazing line, which ends with an elegant bend. In the front, headlights stand out, the shape of which by SsangYong specialists clearly overlooked the Mercedes S-class, placing them vertically for recognition. In addition, the wide chrome grille of the SsangYong Rexton radiator, also similar to the similar element of the previous models of the German manufacturer, is striking, as if it hangs over the bumper jutting forward, making the front part of the car more solid, but at the same time light. 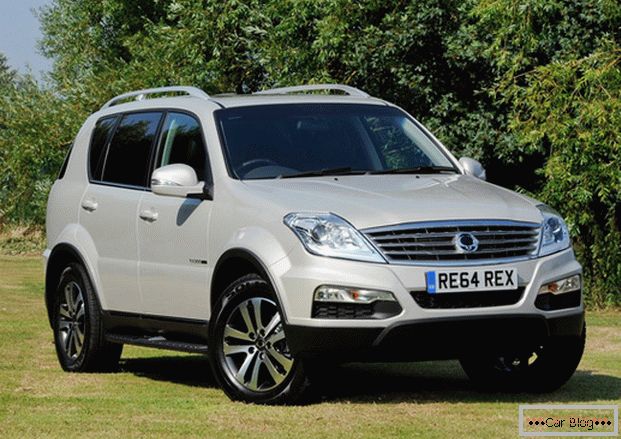 If you give an opportunity to a person who is not very familiar with the global automotive industry to say under which brand Rexton or Kyron are manufactured, he will most likely attribute the latter to the products of one of the Chinese enterprises. Indeed, even after upgrading the SsangYong, Kyron doesn’t look very harmonious - thanks in large part to the visually heavyweight rear section and the stamped line running along the entire length of the body's sides. From the front of the SsangYong mid-size SUV, the variety of grilles, differing in size, shape and even cell size, disappeared, however, the only one left gives the car a somewhat ridiculous look, similar to a person with a naive expression formed by a half-open mouth. For the rest, Kyron doesn’t want to make any claims, as the headlights, bumper and fog lights look quite rigorous and solid enough - but the impression of harmony and the use of an unambiguous approach to the design of the SsangYong still does not cause. 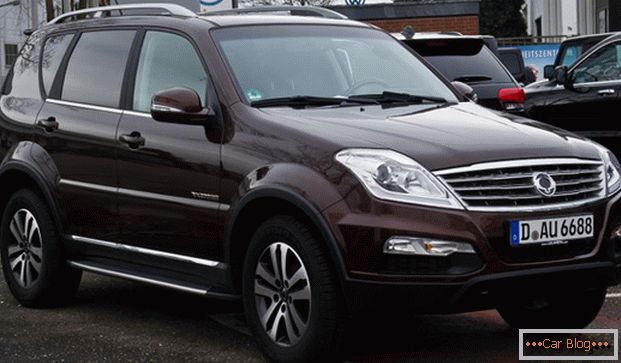 Glitter and poverty of the interior

Sitting in the SsangYong Rexton, you unwittingly imagine yourself as a driver of a big official - the design of the cabin painfully reminds Mercedes ML-class of the first years of release. However, after a few seconds, you realize that Rexton is still very far from the real premium class - its devices look faded, their brightness is almost impossible to set at an acceptable level, and the entire front panel is covered with plastic imitation wood veneer inserts, but also approximately not like that. Armchairs would be good if SsangYong company produced executive class furniture - they are very wide, and also have a wonderful backrest and pillow profile, but are completely devoid of normal lateral support. The back sofa SsangYong Rexton has similar parameters, adjusted for size - it will not be very convenient for people to sit here because of the shape of the pillow, pushing them out and forcing them to crawl to the side in particularly sharp turns. 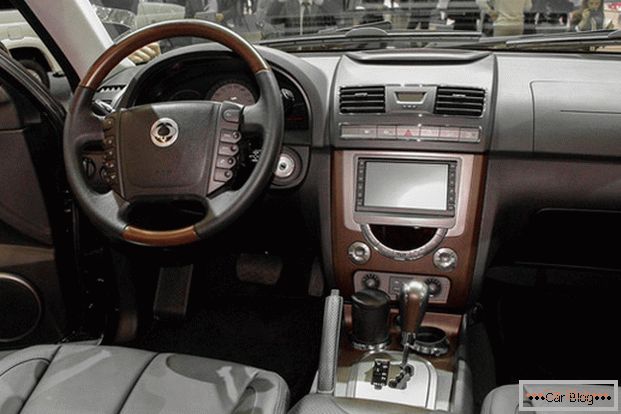 If we talk about what is better - Kyron or Rexton, a smaller SUV would like to praise for the honesty and openness of the interior. He is completely devoid of counterfeiting a tree that upsets the owners of SsangYong Rexton - the dark plastic used instead looks much more serious and does not seem to be an attempt to disguise poverty under the fake luxury. The most successful element of the interior design Kyron is a driver-oriented center console, containing several round switches located in a row vertically. The front of SsangYong Kyron is a bit cramped and there is a lack of overhead headroom, but the chair

adom.ru reliably keep people of different builds from spontaneously moving in turns. The back sofa is much narrower than in the Rexton, but the three of them are undesirable due to the very limited distance between the two rows of seats. 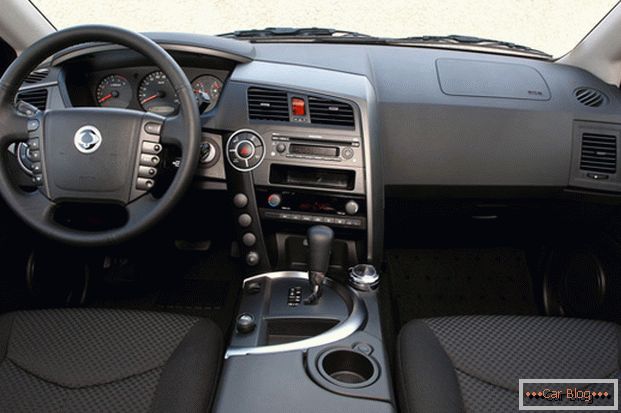 Since we are comparing large SUVs, one of which even makes a claim to belonging to the premium class, it is worth starting with the chassis of SsangYong cars. In this regard, Rexton pleases passengers with the complete absence of rigid shocks and bumps penetrating the cabin even when passing large road obstacles. However, the long base SsangYong Rexton, in the rear overhang of which there may be two additional passenger seats, makes itself felt significant fluctuations in the long waves of asphalt, formed as a result of exposure to high ambient temperature. Because of this, especially impressionable people in SsangYong Rexton can rock out - before the “calm down,” the suspension makes several successive vibrations.

In terms of comfort, Kyron is the complete opposite of the “big brother” who has already acquired gentlemanly manners - every tiny irregularity responds with unpleasant knocks and vibrations throughout the body. When you drive in a SsangYong Kyron into a deep hole, it seems as if the suspension is completely absent here - the riders are literally throwing them up to the ceiling. But if many manufacturers try to achieve delicate controllability in this way, then in the case of SsangYong, the reaction to the steering wheel remains ambiguous, and the Kyron steering wheel oscillates when driving through every crack in the asphalt, even at medium speed.

Dynamics - once again about peace

Calm is not only the design of cars SsangYong - if we talk about the dynamics Rexton и Kyron, both cars can not claim to be fast and maneuverable. However, active drivers should choose the Rexton - thanks to the huge torque of the turbo diesel engine with a working volume of 2.7 liters, it very confidently accelerates a heavy car, allowing it to reach a threshold of 100 km / h in 11.3 seconds. Of course, SsangYong Rexton is equipped with a fairly archaic 5-speed automatic, but in this case it looks like an advantage, because the gearbox does not yet belong to that generation of units, for which the main characteristic is fuel economy. True, the driver’s character has to pay for fuel consumption reaching 13 liters in urban areas - and experienced owners of Rexton complain of an increase in this value to almost 20 liters per 100 kilometers in conditions of heavy winter and frequent driving at lower transmission levels.

If the reaction of SsangYong Rexton to pressing the gas pedal is just very smooth, then in the case of Kyron the slowness of the car begins to annoy. For a heavy vehicle, a 2.0 liter turbodiesel with a capacity of 141 horsepower is simply not enough. In the city of SsangYong Kyron is very difficult to keep in the stream - especially when you leave on a large street, in fact, is the main highway with a speed limit, existing only traffic police post. In this case, the SsangYong Kyron with a manual transmission would behave quite differently - the relatively recently created 6-speed automatic transmission very quickly shifts gears, allowing to reach the zone of peak torque only when the pedal is pressed "to the floor". As a result, Kyron cannot achieve the “golden mean” in dynamics - you can either drive slowly, saving fuel and creating an obstacle for others, or try to achieve active accelerations and bring fuel consumption to 12-14 liters per 100 km typical of more major rexton.

The test involved the modification of cars, as the selection is equipped with the most problematic units. SsangYong diesel engines have frequent malfunctioning of the fuel equipment, especially in terms of the smaller diesel engine installed on the Kyron. The Rexton engine is characterized by increased oil consumption, the volume of which in the tank can be reduced by 0.5 liters for every 1000 kilometers traveled.

If you compare the automatic transmissions installed on Kyron and Rexton, what to choose, you will not even be advised by an expert. The older SsangYong Rexton unit leaves the torque converter unit, and by 150 thousand kilometers it is necessary to be ready to change half of the parts due to excessive wear of the clutches. The relatively new Kyron transmission is also not without problems - with active driving, the electromagnetic automation units can wear out very quickly, and submerging the car in the dirt on the roads is fraught with the failure of half of the electronic components.

Not premium at all

Both cars of the company SsangYong do not yet correspond to the premium status that the manufacturer is trying to give them, seeking to get the maximum profit from the sale of their products. However, Rexton is a great alternative to expensive off-road brands of famous brands - moreover, an alternative to an affordable, but not inferior from that in comfort. That's just in the SsangYong Rexton salon too much of the artificial luxury characteristic of Asians - it would be worth replacing it with cheaper, but pleasant-looking stylistic solutions. But SsangYong Kyron, unfortunately, can only compete with domestic and Chinese cars, despite the more modern interior design. 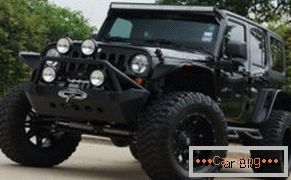 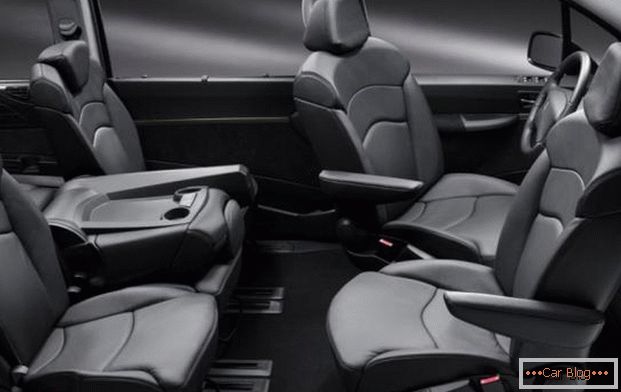 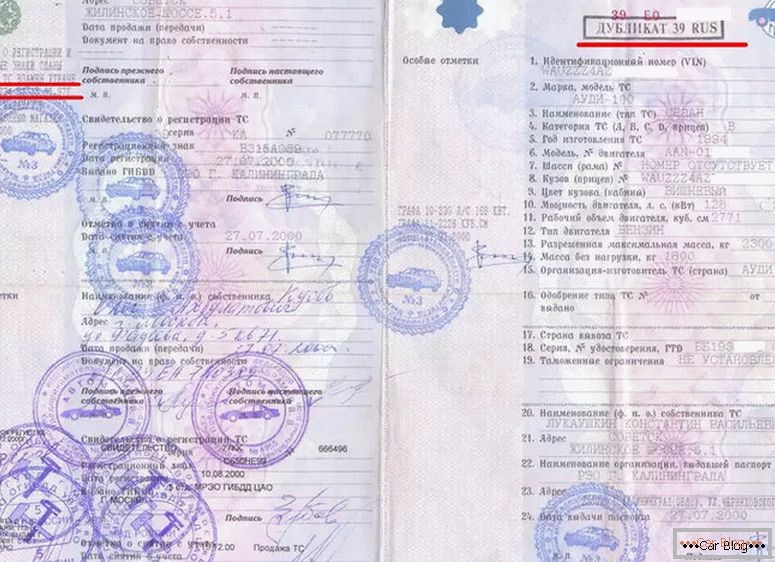