Try to mention the new speed records, exceeding 1000 km / h in any company - there will surely be a few people who consider them an unnecessary risk. However, the constant increase in speed is a real engine of progress in the automotive industry. Engineers are forced to develop new reliable components for record cars, as well as to refine them in accordance with safety requirements. All the technological advances obtained at the same time, sooner or later go into the civilian automotive industry. Therefore, the next world speed record on a car is not an aimless risk, but a new impetus to development. 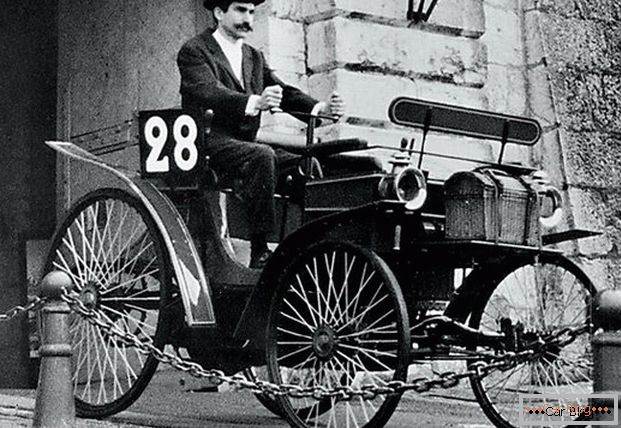 Despite the lack of official indicators, the story will forever remember the name of Emil Levassor - one of the pioneers in the automotive industry and a genius inventor. On his own designed transport, he covered a considerable distance from Paris to Bordeaux and back, winning prestigious competitions. Unfortunately, the measurement of speed in that race, no one bothered, and a specific indicator will forever remain a mystery. However, Levassor’s fame brought not only a record, but also an unforgettable phrase that driving at a speed of over thirty km / h can be called a real madness. 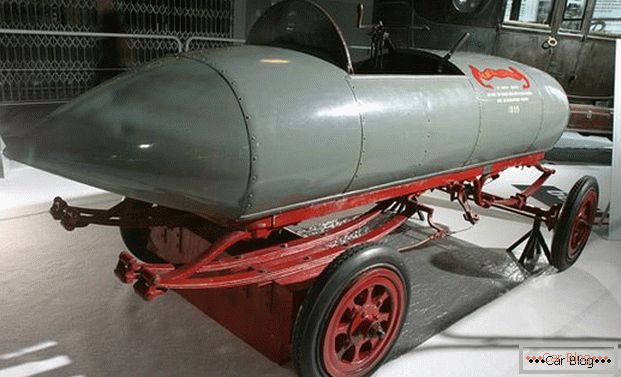 Only one year was needed to overcome the milestone of 100 km / h by car. Camille Zhenattsi used the original electric car, which he called "Eternally Unhappy." The power of the vehicle was only 40 horsepower, but this was quite enough due to the streamlined shape of the body and the ability of electric motors to reach the limiting torque at low enough revs. After that, almost every person began to dream of his own world speed records.

The Belgian professional racer Burman, who used a Benz gasoline car, doubled the result. The maximum speed reached by him was 228 km / h. Of course, it was difficult to call this transport serial - it was subjected to many modifications both at the factory and just before the race itself. However, Benz received a good advertisement, which in just a couple of months seriously increased its sales.

The next significant level was overcome by the Englishman Sigrev after the First World War - in 1927. Specially designed for setting the record, the Sunbeam car was able to reach a speed of 327.9 km / h, which made it unsurpassed for the next 5 years. Yes, in these years the records were short-lived, because the technique was quickly improved, the power of the motors grew, and the chassis required less effort to control it at high speed. 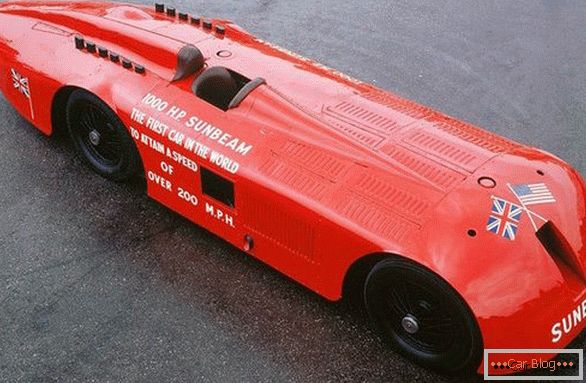 In 1932, Malcolm Campbell, an automotive enthusiast, became the champion. He worked on the creation of a unique vehicle in collaboration with Napier, and was able to reach speeds in excess of 400 km / h. Imagine the result, which is considered almost unattainable for a modern production car, was shown over 80 years ago!

However, the Campbell record was also destined to exist for 5 years. In 1937, when Europe already met the first prerequisites of the war, John Aiston was able to reach speeds in excess of 500 km / h, which for many years was the maximum for a transport with a piston engine. Rolls-Royce helped him build the car, which prepared a three-wheeled chassis and assembled an engine capable of accelerating it to an incredible speed. Only 10 years later, John Cobb broke this record, reaching 600 km / h. 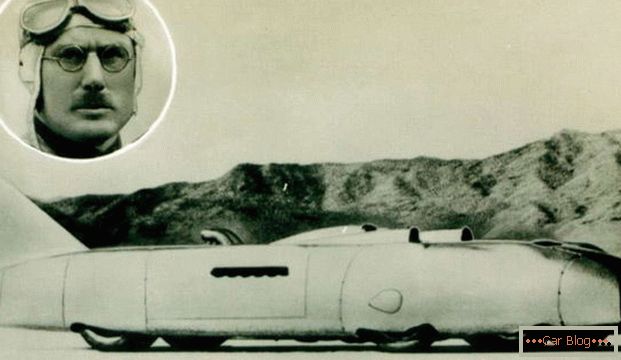 Surprisingly, Cobb’s speed record remained absolute for a long time, despite the rapid advancement of technology in the post-war period. The following result was shown only in 1970 - it belonged to the American stuntman Harry Gabelich. A vehicle called Blue Flame can hardly be called a car - it was rather a rocket more than 11 meters long, equipped with wheels and a cockpit for the pilot. Jet engines were able to accelerate the car Gabelich to 1014 km / h, despite the mass exceeding 2 tons.

Interestingly, for the first time, another American stuntman, Stan Barrett, who used the Budweiser Rocket, reached the speed of sound. An interesting feature of this record transport was the simultaneous installation of a liquid and solid propellant rocket engine on it. Barrett made a record race at the current runway of a military airfield, showing a result of about 1,300 km / h. However, the commission of the international motor sport federation refused to register the record, because the stuntman refused to make a check in the opposite direction, and the radar used by the military did not have an automatic control system.

Due to the incomprehensible stubbornness of Barrett, who refused to try again, the maximum speed record is now associated with the name of Andy Green, who is a pilot of the British air force. Its result was 1227 km / h, and according to the testimony of the operator of the measuring complex, in one of these races the speed exceeded 1231 km / h, but the average result was recorded. There is no need to talk about driving to the wheels in a Thrust SSC car - the thrust of 110 thousand horsepower was ensured by two turbofan engines of the Rolls-Royce Spey brand. The track was laid in the United States, in the Black Rock Desert, in the state of Nevada. 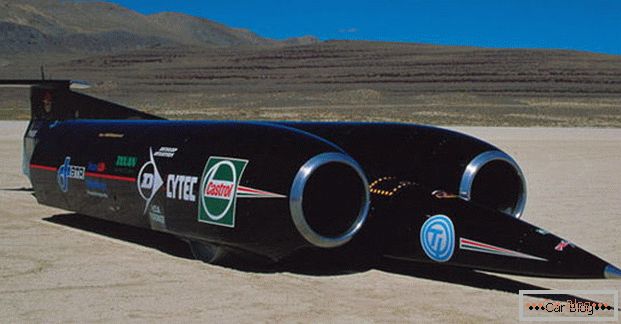 The team that built the incredible car is preparing for a new record. Currently, the active phase of work on the vehicle under the name of the Bloodhound SSC, which according to the creators' plan should reach a speed of 1000 miles, or 1609 km / h, continues. Its acceleration will be carried out in two stages - the first one will reach the speed of 1200 km / h thanks to the Eurojet jet engine borrowed from the English fighter, and then the hybrid rocket engine will be launched. Interestingly, the machine will use the 800-horsepower gasoline engine Jaguar V12 to drive pumps and electric generators. Andy Green, a veteran of automobile speed records, will sit at the helm.

If we talk about the records set on the production car, then the speed of 455 km / h is developed by the Ford BADD GT, which is produced in a small series. The power of the V8 engine reaches 1,700 horsepower thanks to serious modifications of the tuning workshop. Serial car is considered because it received official approval from the design division of Ford.

Interestingly, John Cobb's record was truly surpassed in 2001, having existed for 64 years - for this the American Don Vesco will build the Turbinator car, which had a wheel drive. Strictly speaking, Blue Flame and Thrust SSC cannot be considered auto in the conventional sense, since they are driven by a jet stream, and not by an internal combustion engine. Turbinator is equipped with a motor power of 3750 horsepower, which allows it to accelerate to 737.5 km / h. Don Vesco has already signed a contract with an engineering agency that will supply an engine with a capacity of 4,400 horsepower, which will allow him to accelerate to 500 miles per hour, which is 805 km / h.

Bloodhound SSC is not the only contender for the title of world record holder - a few more teams from different parts of the world have declared their intention to prepare supersonic cars. Although their undertakings are not well received by society, engineers highly appreciate such projects, since each of them brings serious benefits to production cars. While we are waiting for a new speed record, it is worth remembering about other interesting achievements: 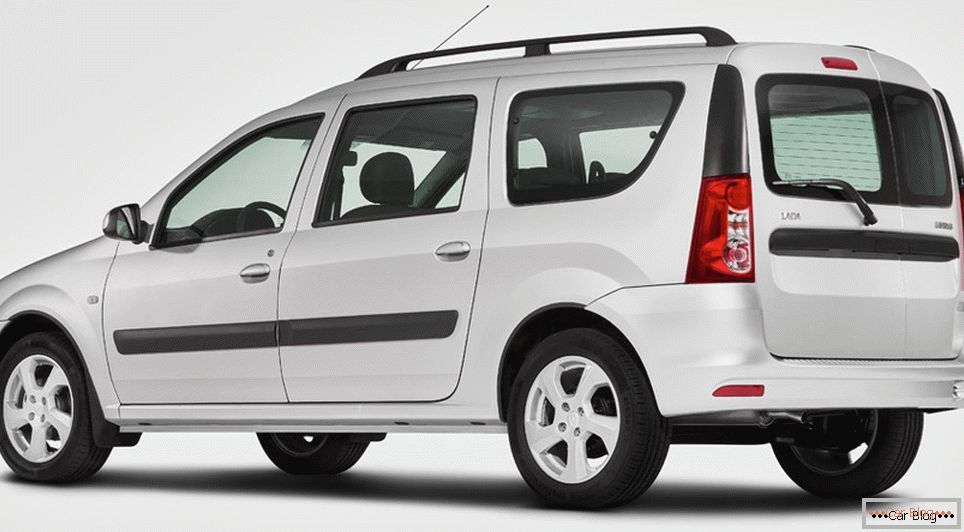 Avtovaz engineers conjure over a new engine for largus 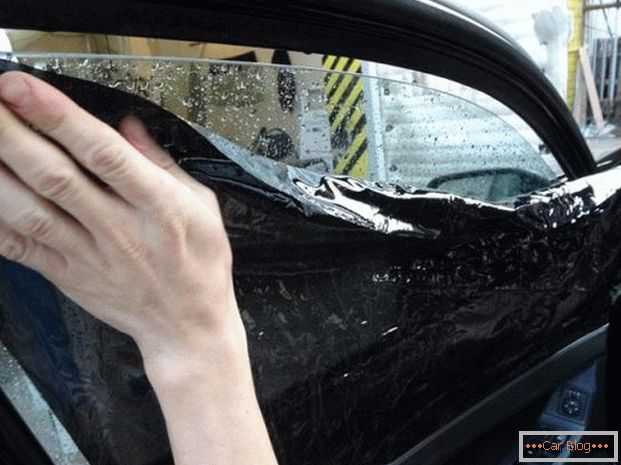 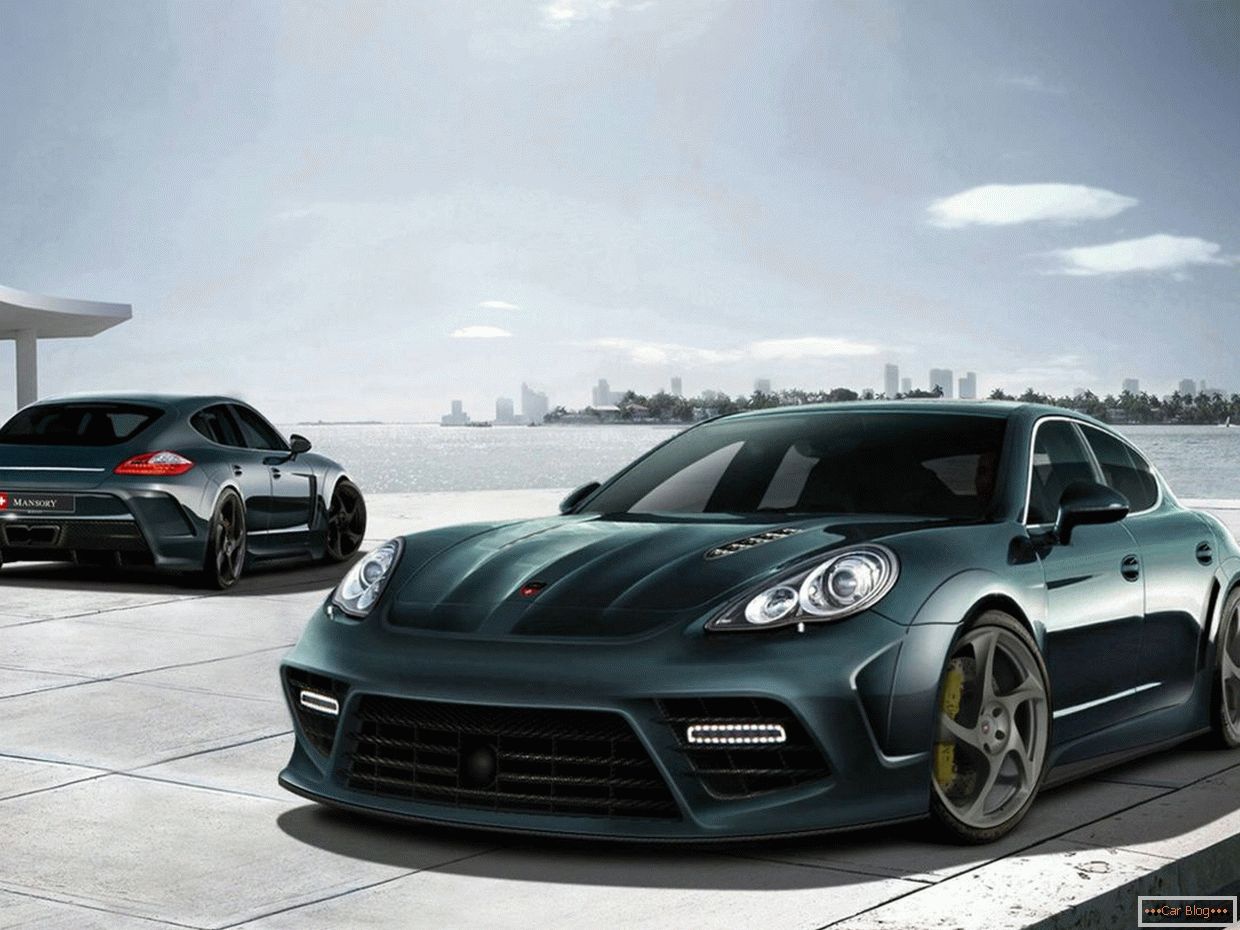 Tuning porsche panamera to add exclusivity to the car