The best lubricant for locks and hinges in the car door

All new cars are delivered with well-oiled door locks - usually at an assembly plant or at a dealership they use thick consistency. 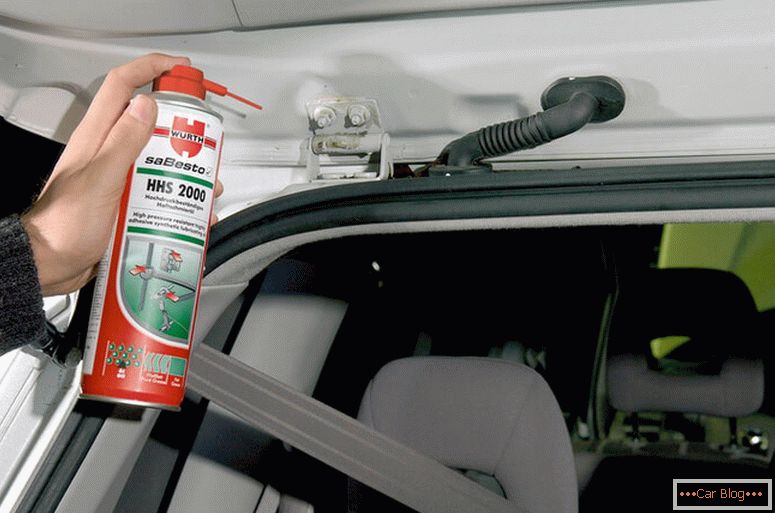 The hinges are treated in the same way, since they are also a moving mechanism undergoing accelerated wear. However, after some time, the lubricant is washed out of the car door, which leads to unpleasant consequences.

The best option for processing loops and locks of the car is a silicone grease, which is produced by many well-known companies, including XADO, Forsters, TurtleWax and others. The main advantage of the silicone base of such a tool is the ability to carry high loads without losing properties and the ability to operate at any temperature, ranging from -50 degrees. It is also recommended to lubricate door locks with this composition due to its durability - due to its high adhesive properties, it instantly sticks to the surface of metal parts. The resulting film is preserved on the surface of loops and other parts for 1-2 seasons with careful operation. 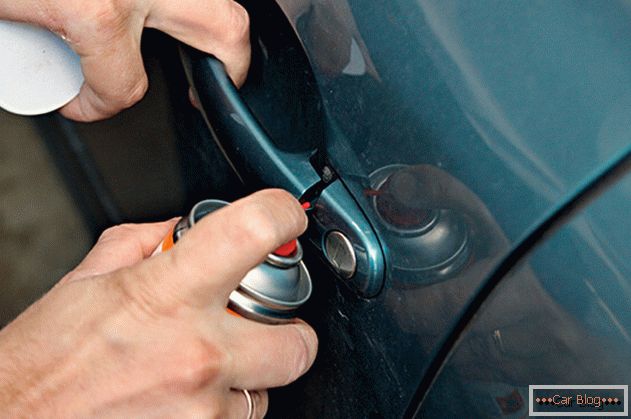 Silicone grease comes in the form of a spray, which makes it as easy to use as possible. It should handle car locks and other moving parts when thinning a layer of existing lubricant, as well as immediately after washing in winter. To do this, take paper napkins or special wiping material - they should wipe the hinges and door locks, removing the remaining moisture from them. Then it is necessary to spray the lubricant from the cartridge onto the mobile connections of the car, opening and closing the door several times in order to evenly distribute it. Silicone grease can be supplied in the form of a paste in tubes, which is typical for domestic manufacturers - it is recommended to put it in gloves, carefully rubbing into each part of the lock or hingle protruding on the surface.

There is also an improved version of silicone grease. The company Liqui Moly produces a product called HAFTSCHMIER SPRAY - it added a complex of synthetic oils and antiwear additives. The result of the use of a modified tool is to reduce friction in the hinges and car locks, and the duration of this effect is quite long. In addition, after evaporation of the solvent contained in this multi-component lubricant, it forms a thick layer that adheres to metal parts and is not washed off even under the influence of a water jet at a car wash. Due to this, the lubricant protects the hinges and door locks of the car for two seasons, if it is not removed from the moving parts intentionally. 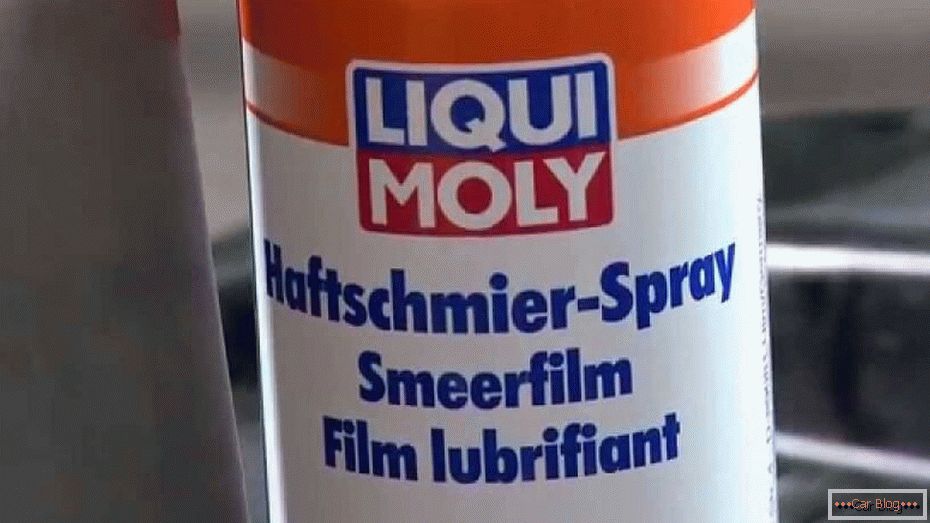 Technical vaseline is considered the most inferior type of polymeric grease for car doors. It also forms a protective film that reduces the rate of wear of metal parts and repels moisture, but its service life is limited to 2-3 weeks, or one sink. In addition, such a tool, which is usually used for the preservation of certain components of a car, is supplied only in tubes, which makes it inconvenient to apply.

Despite the fact that polymer lubricants well protect the locks and door hinges of the car from wear and moisture, they have little resistance to leaching and destruction under the influence of strong heating. Therefore, some experts recommend to lubricate moving parts with grease compounds that allow you to get a longer effect. They are advised to be laid for the winter, because it is at this time that there is the greatest risk of moisture getting into the mechanisms - it precipitates as condensate during the cooling down of the car.

The best option for lubricating the doors in the car are compositions based on lithium. They are represented by domestic Litol-24, as well as several foreign counterparts, among which Castrol LMXLI-KOMPLEXFETT 2 stands out. Lithium lubricants significantly reduce friction and effectively repel moisture. However, their anti-corrosion properties are sometimes questioned, because the moisture still washes out such a tool and in places where it is applied with the thinnest layer, rust spots may appear over time. Therefore, if you prefer to use such tools, then you should give preference to complex compounds like the Castrol lubricant mentioned. 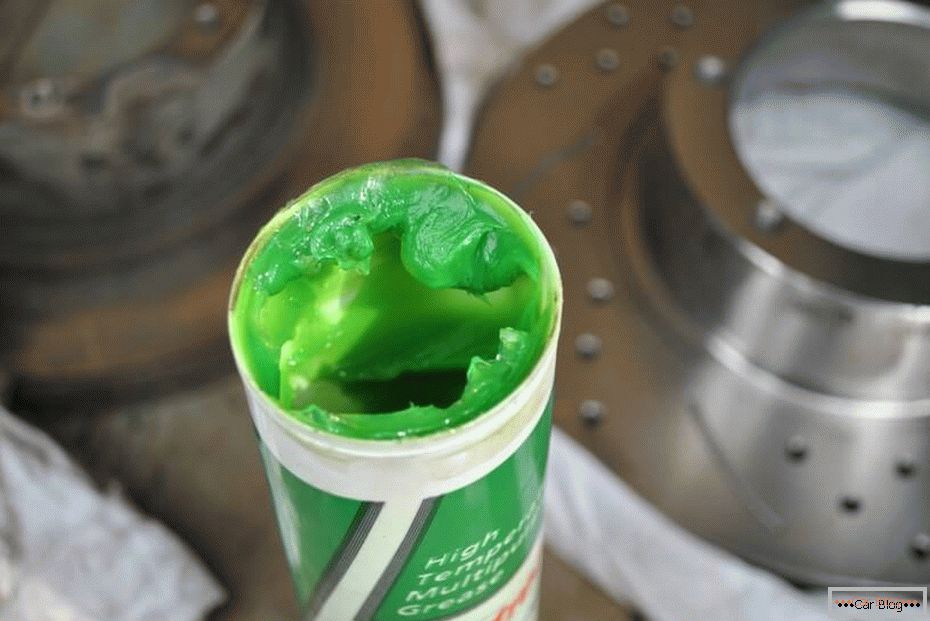 In addition, auto door locks and locks can be treated with molybdenum disulfide-based products. This metal salt is part of numerous products that are suitable for protection:

Such grease will effectively protect the door locks from moisture and accelerated wear when rubbing metal parts. However, it also has its drawbacks - in particular, when the air is very dusty, solid particles that fall into the tool can significantly change its properties, therefore, it is not recommended to use this lubricant for processing off-road vehicle locks. In addition, molybdenum disulfide products can leave greasy stains on clothes, so they should be applied extremely carefully.

The best option would be to purchase a lubricant made by Liqui Moly or Castrol - as a rule, special anti-wear and adhesive additives are added to the products of these companies, which significantly improve its properties. Among the budget options, you can particularly highlight the domestic means of CV joints-4 and Fiol-8, which contain a fairly large amount of molybdenum disulfide. As in the previous cases, it is possible to lubricate the hinges of the car only after preliminary removal of moisture with a paper napkin or a wiping material. In this case, ice crystals will not form on the surface of the hinges or locks, destroying the lubricant itself and the surface of the metal parts. 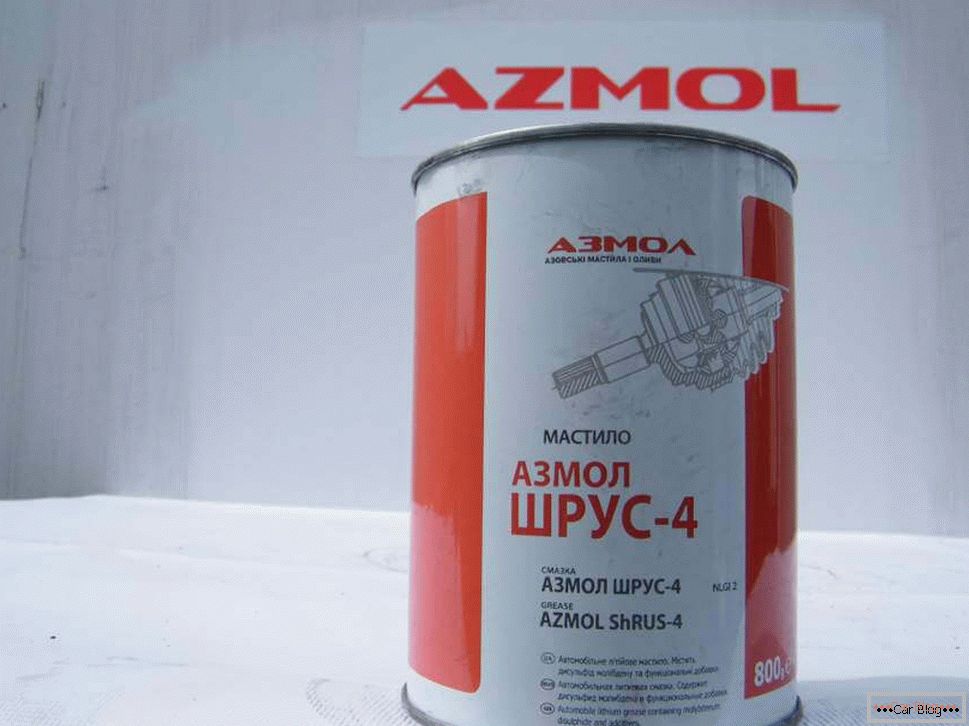 In extreme cases, you can use graphite grease. It contains a lot of abrasive particles, so it’s not necessary to talk about wear protection - such lubrication will contribute to the development of hinge and door locks in a car. Its main purpose is to preserve the car for a long time and prevent the spread of corrosion on the surface of the hinges or car locks. Graphite grease is usually chosen because of its cheapness, but it should be discarded if it is possible to purchase a better protective agent.

Quite often on the forums, car owners recommend car loops with the help of universal grease WD-40 or a tool called “liquid key”. It is worth remembering that the main purpose of such a composition is to displace moisture and dissolve rust, but not in the long-term protection of parts from wear. WD-40 grease can damage the surface of the hinges and locks of cars, which will lead to the need to replace them in the near future. In addition, it is very quickly washed out, therefore, after a few days after processing, moving parts will remain unprotected. 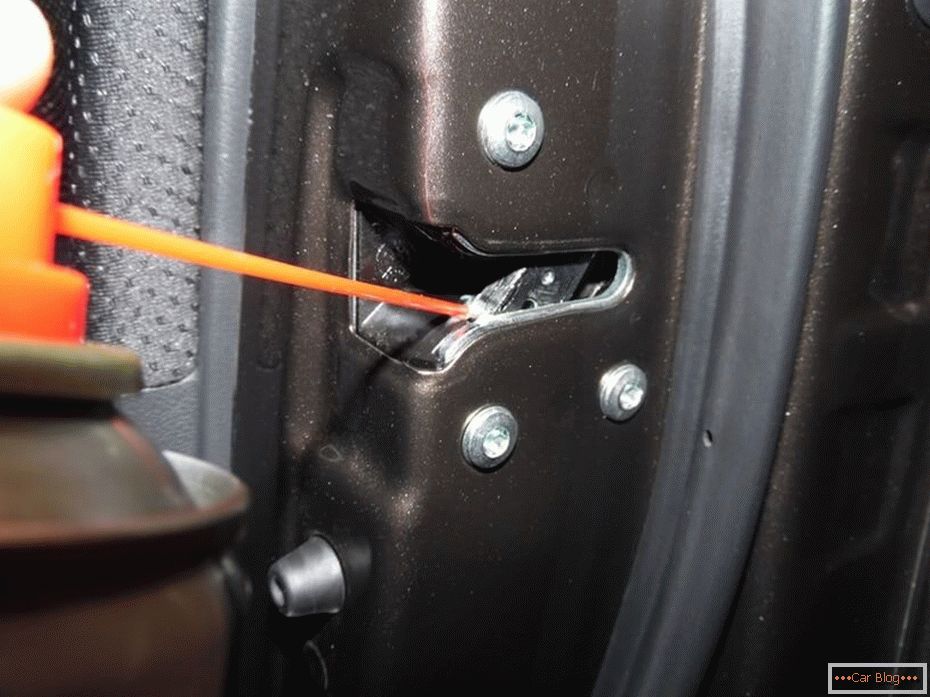 It is also not recommended to handle the hinges with auto grease or its analogs. This grease has an increased plasticity, so it can spread too much on the surface of the doors, leaving black or brown spots on the painted surface. For the same reason, the grease is quickly washed out, which leads to an increased rate of wear of movable joints. Solid oil well absorbs dust and other pollutants - this causes a rapid change in the properties of such a lubricant.

Finally, spindle oil or similar liquid compounds that can be used in other parts or components of a car are not suitable for processing doors. They quickly spread out, which causes moisture to appear on the surface of moving parts after a few days. These oils can handle the internal mechanisms of locks in case of their poor performance or when the doors are jammed, but not the outer surfaces. 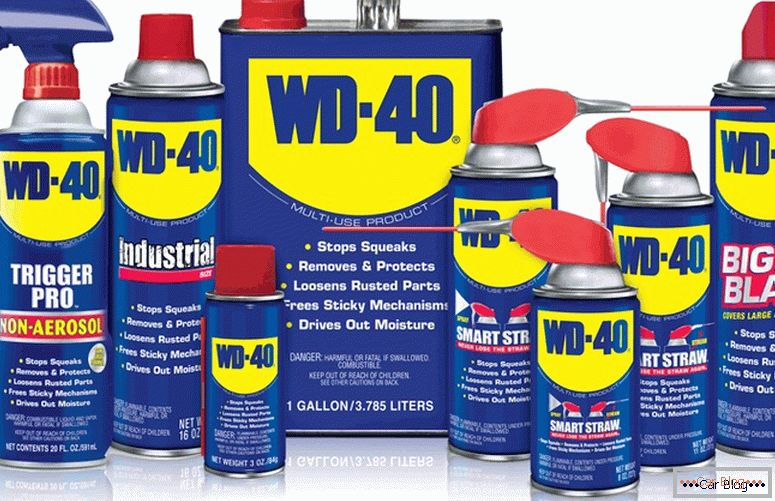 A similar approach should be used in relation to means of unknown origin - if you do not know anything about the composition and properties of the lubricant, you should not put it on the car’s doors, because this can cause significant problems in the future.

The best option to protect the doors

If you do not want your car to stop opening one winter morning, you should use a special tool to clean the exterior surfaces of locks and hinges. A universal option is a silicone grease, which forms a thin polymer film that repels water and reduces wear rate by combating friction. 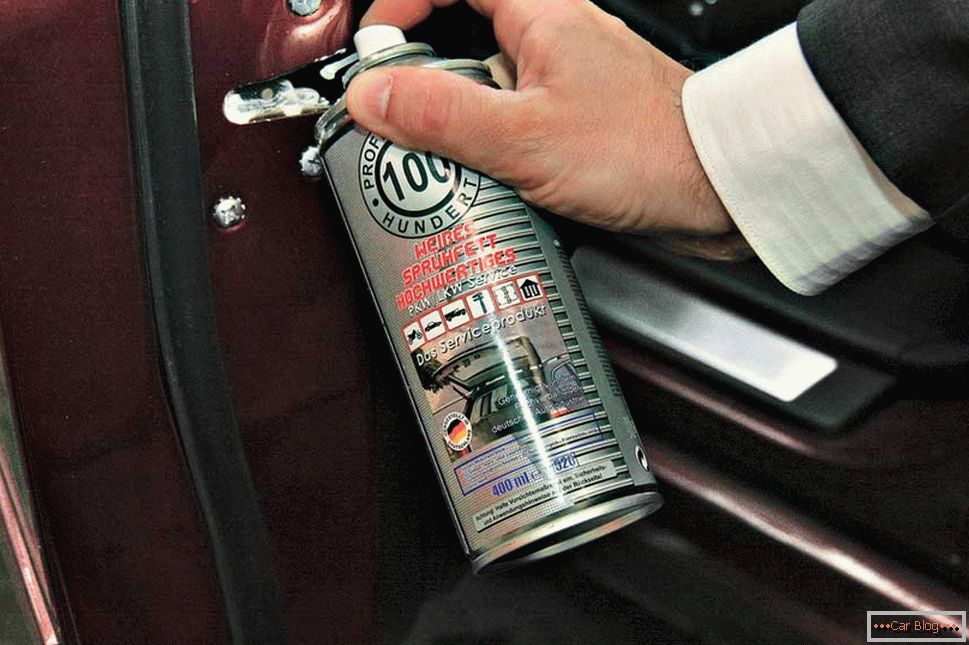 However, polymer lubricants can be quickly washed out and destroyed by mechanical action, for example, when a water jet from a high-pressure cleaner gets into the lock. Therefore, a longer lasting effect can be obtained with the use of mineral-based greases. Among them, it is best to give preference to lithium compounds and products created using molybdenum disulfide. 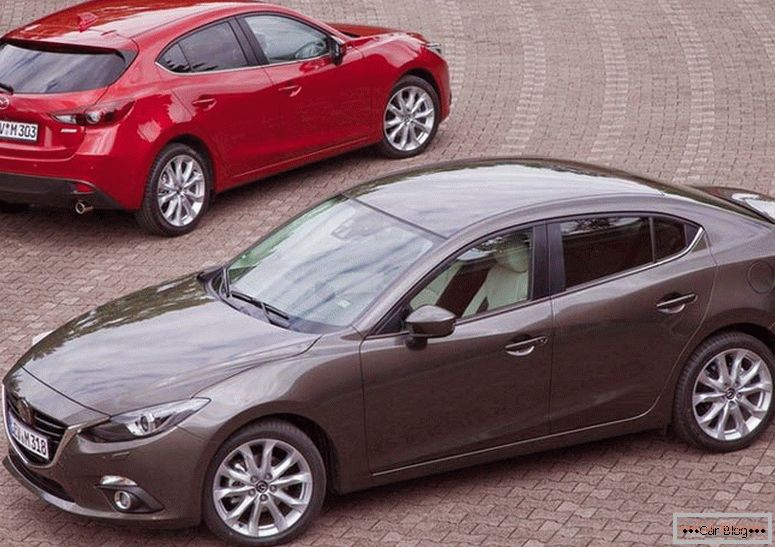 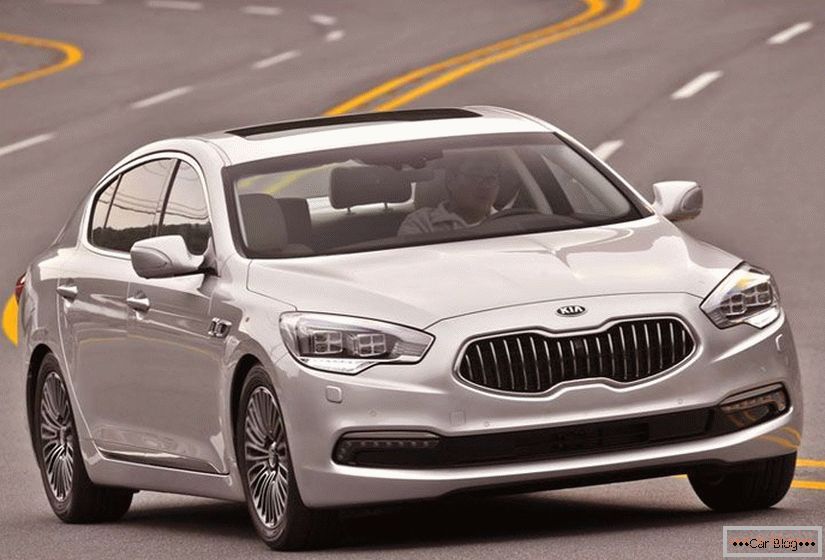 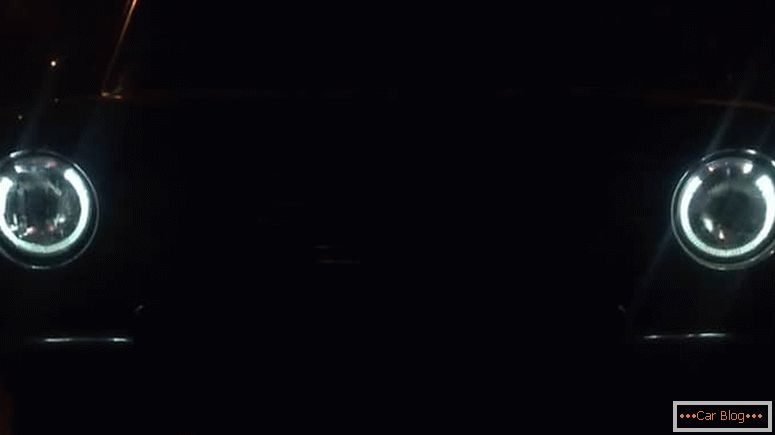