Power, which is often used in the steering mechanism of modern cars, greatly facilitates the life of the driver, reducing his level of fatigue and improving concentration on the road situation. 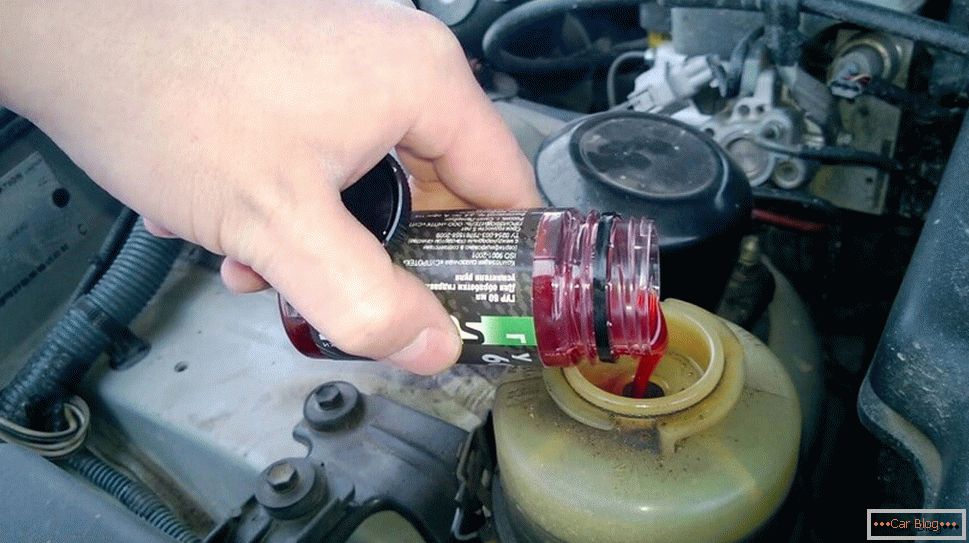 However, this expensive node creates a lot of problems. Its frequent breakdowns on some cars are associated with huge loads on the hydraulic motor and the actuator, which makes it easier to turn the steering wheel. To slow down wear, it is worth using special tools that are added to the hydraulic oil of the hydraulic booster.

Studies show that the best results are obtained by using a domestic remedy called RVS Master Power Steering Treatment Ps2. It is based on magnesium silicates, which form a thin film on the surface of moving metal parts, which reduces the level of friction and helps to significantly increase the service life of power steering. In addition, it fills microcracks, cavities and other defects that arise due to wear. Additive helps to reduce gaps in the hydraulic circuit and to avoid oil leakage through poorly closed valves - this greatly increases the efficiency of the hydraulic booster. 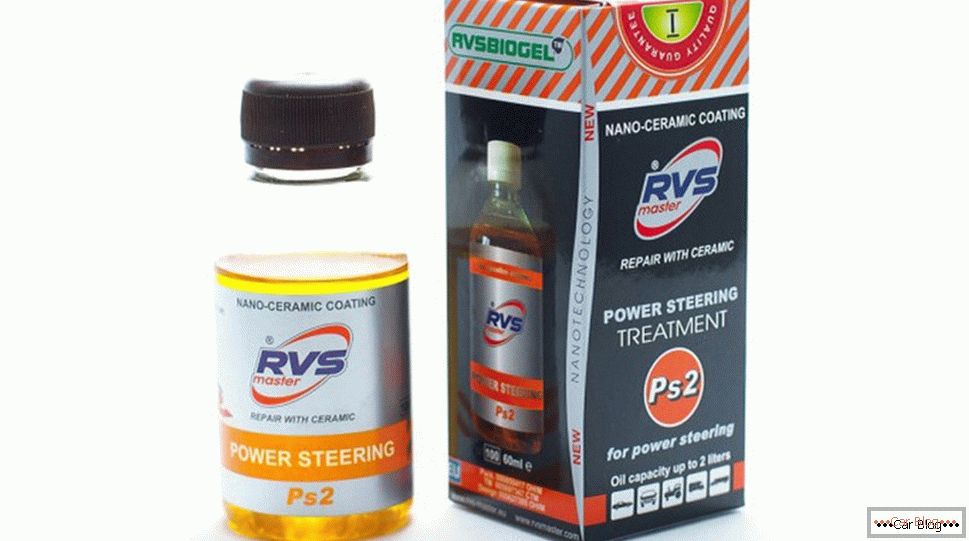 The practice of using a domestic additive shows that adding it to the hydraulic booster oil helps to eliminate hum, squeaks and other unpleasant sounds that are caused by the strong wear of parts. In addition, the additive helps to eliminate such an unpleasant effect, as "biting" the steering wheel in extreme positions. Due to this, it makes driving a car as safe as possible. The use of additives for power steering can significantly reduce the force on the steering wheel, due to which riding in a large city does not cause any inconvenience. The cost of the tool is equal to 1240 rubles per bottle, the contents of which is added to the two-liter oil tank - this figure cannot be called small, however, given the high effectiveness of the additive, the costs will be fully compensated by the cost of repairs.

XADO, a well-known company, offered its own version of an additive for power steering in a car. Her additive is a gel-revitalizant, which is added to the power steering oil tank and is gradually distributed over the surface of all parts. It forms a rather thick film, which gradually hardens, forming a cermet coating that fills all the damage present on the surface of the power steering components. The process takes a lot of time - it takes about 50 hours or 1,500 kilometers to completely freeze the tool and restore the integrity of the parts. 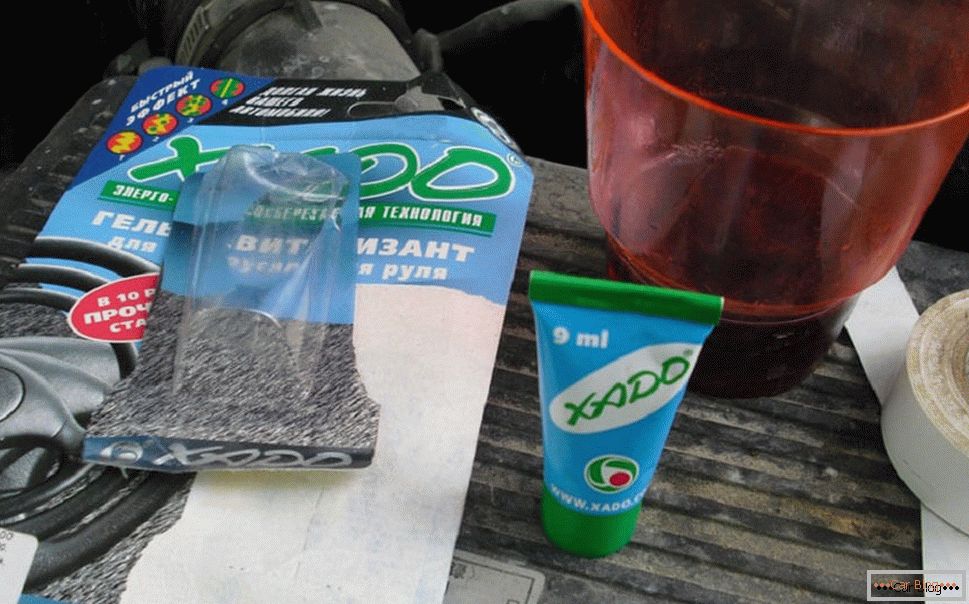 Means for restoring power steering helps to eliminate unpleasant sounds, as well as prevent blocking in extreme positions that threaten the creation of an emergency. In addition, the manufacturer points out the advantages of the additive ability to protect the components of the site from damage, even with a strong decrease in oil level.

However, this does not mean that the car can always drive in this state - rather, such protection will help to get to the repair site on its own. Means for restoring power steering from XADO costs 850–900 rubles per tube, and the manufacturer promises its efficient operation for 50 thousand kilometers. But experienced motorists, who often use the additives from XADO, claim that for complex protection during the specified mileage, 2-3 bottles will have to be used.

Some drivers buy additives not only for prophylaxis, but also for the repair of power steering associated with oil leaks. If the oil level in the power steering tank is constantly decreasing, you should purchase Liqui Moly Servolenkungsoil-Verlust-Stop additive. It is a universal sealant for hydraulic systems, whose composition has been optimized for use in the steering system of the car. The main effect that can be achieved in its application is the elimination of leaks by restoring the integrity of plastic and rubber compounds. Due to this, a constant level of oil is maintained in the power steering, which makes it possible to forget about the need to constantly add lubricant. 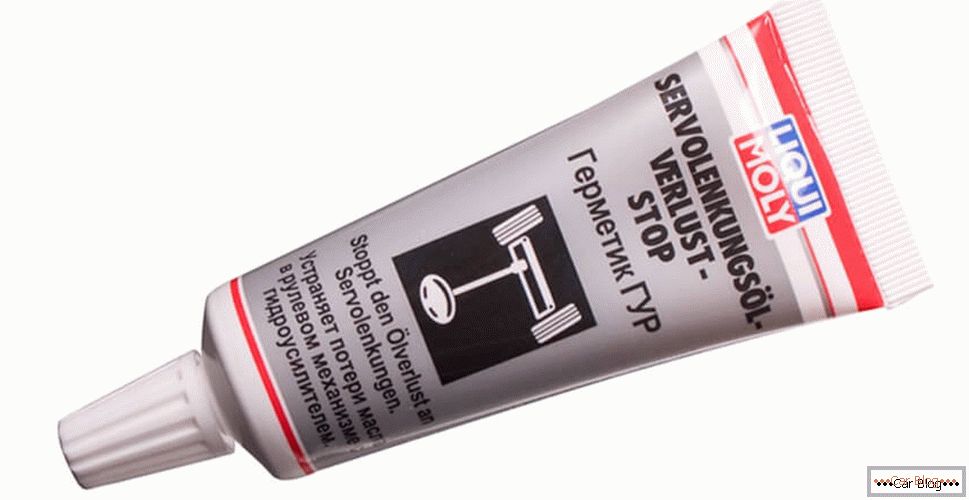 In addition, the additive contains a number of detergent and regenerating components, which also provide an excellent positive effect from its use. When adding Liqui Moly products to the GUR oil tank, the following occurs:

However, in the first place, this tool is a sealant, therefore its capabilities in the fight against wear are very limited compared to the additives described above. The cost of such a composition is 350 rubles - it can be used when detecting small leaks or as a preventive measure.

In the hydraulic circuit of the power steering can also fill the additive, produced by the American company Hi-Gear. Unlike the above-mentioned means, it consists mainly of organic components, so its principle of operation is completely different. The main effect that can be obtained when using such an additive is to restore the integrity of pipes and plastic compounds, as well as the elimination of microcracks that can cause leaks in the future. 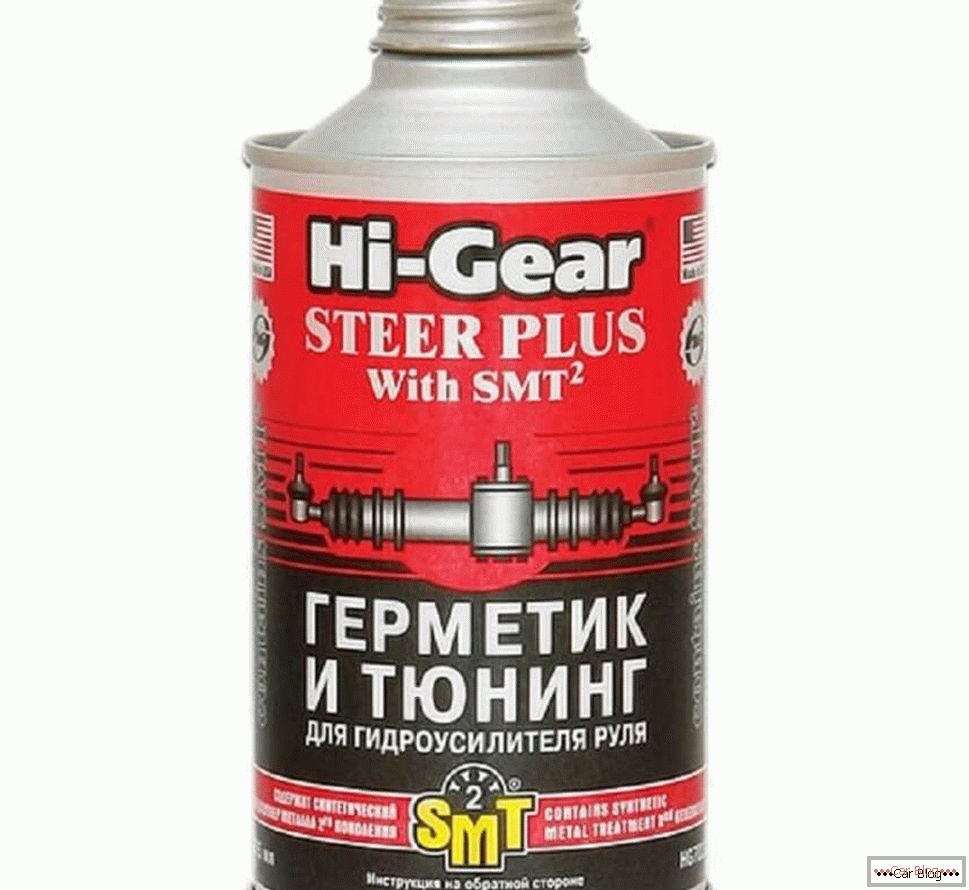 In addition, the manufacturer allows the use of a product called Steer Plus as a power steering sealant that helps temporarily stop the leakage of oil and get to the repair site under its own power. However, you should not count on a long-lasting effect - during the run of 1000 kilometers it is better to turn to the service station to completely eliminate the cause of the leak.

In addition, on the bank with the means it is written that it is suitable for tuning the steering system of the car. Here it is a matter of incorrect translation, since in English the primary meaning of the word Tuning is fine tuning, selection of optimal parameters. In fact, there are the following positive effects from the use of additives:

The cost of one bottle of funds is 500-550 rubles - this volume is enough to add to the hydraulic circuit with a volume of no more than 2.5 liters.

The effectiveness of the additive

Various additives for power steering really allow you to restore worn parts after prolonged use, preventing their breakdown in the near future. However, it is possible to hope for a significant increase in the service life of the power steering of a car only with regular prophylactic use of such agents. A single addition of the additive to the hydraulic circuit of an amplifier that is on the verge of breakdown usually only accelerates the breakdown, since the viscosity of such a tool is higher than that of oil - this leads to blockage of moving components and their destruction. 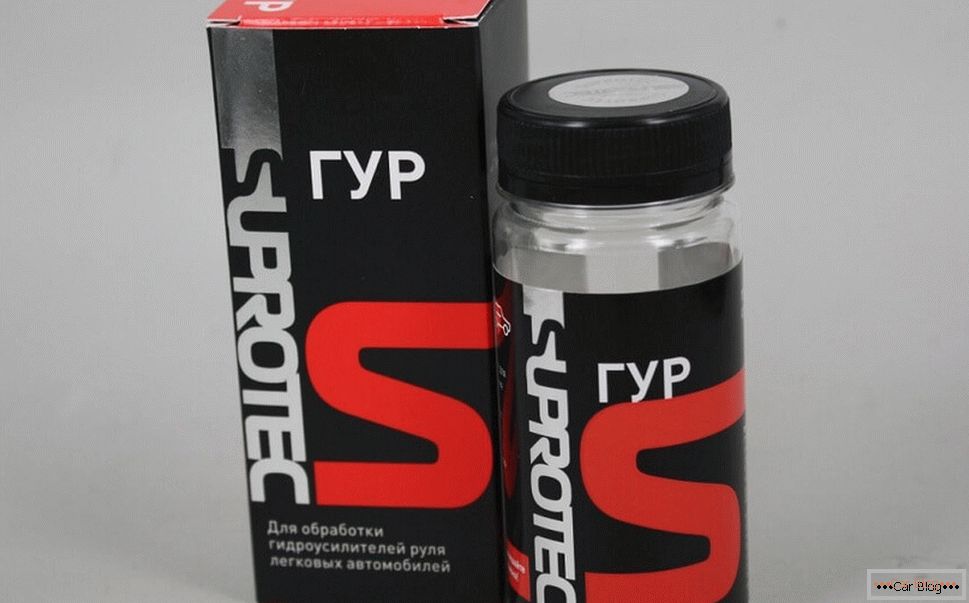 In addition, you can purchase special sealants that help eliminate leaks resulting from the destruction of plastic joints and rubber pipes. It should be understood that these tools also have limited effectiveness - they should be used to protect against damage on the way to the repair location, but not for long-term driving in such a state. 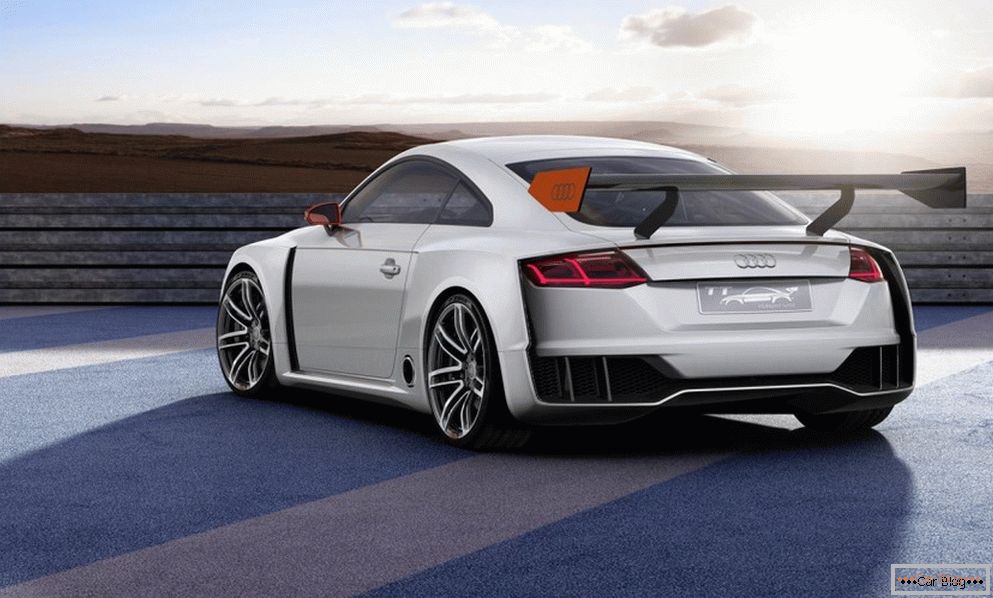 Audi is ready to serially produce engines with electric 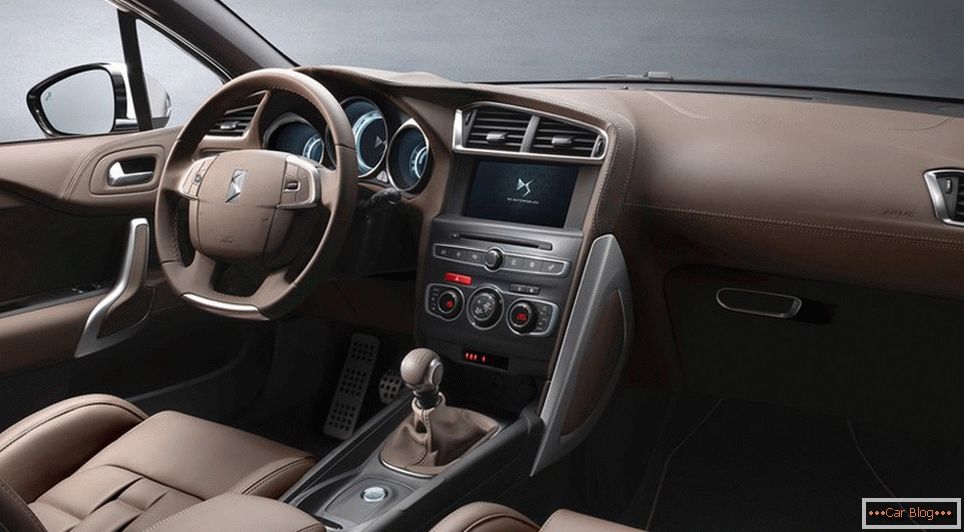