The history of the Land Cruiser SUV begins in 1953. True, the first car was released under the discreet name of the Toyota BJ. Series cars were used for police needs and in agricultural activities. 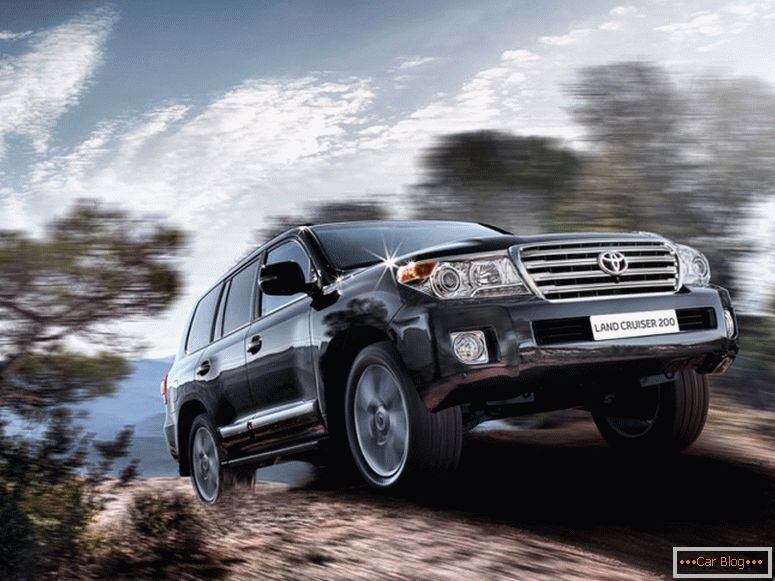 At the heart of the design is the chassis from the truck, with a loading capacity of 1 ton. In total, in the first year, nearly 300 copies of off-road vehicles were manufactured, which were actively used by government services. However, in 1954, marketers thought better of it and gave the SUV a new name with which the car conquered the world - Land Cruiser. Just 10 years after the appearance of the first car, the SUV becomes the best-selling car in the United States.

The ninth generation of the Land Cruiser was introduced in 2007. In Russia, the car was delivered only in the top configuration and earned the status of a cult car, a true symbol of wealth and life success. Even Toyota Land Cruiser 200 photos looks very impressive. But in life, the car makes an even more impression, literally riveting the eye with its power.

In 2012, the model was updated during an easy restyling. If you look closely, there are not so many differences - the front bumper has changed a bit, the grille has been heard wide, optics have got LEDs that are now integral to the LED light, and turn signal repeaters have migrated to the mirrors from the wings.

Increased the distance from the edge of the wing to the plane of the hood. This decision is dictated by the need to ensure the safety of pedestrians - the hood should be flushed and not stuck into the engine. Thanks to stamping on the doors, wheel arches appear to be visually wider. 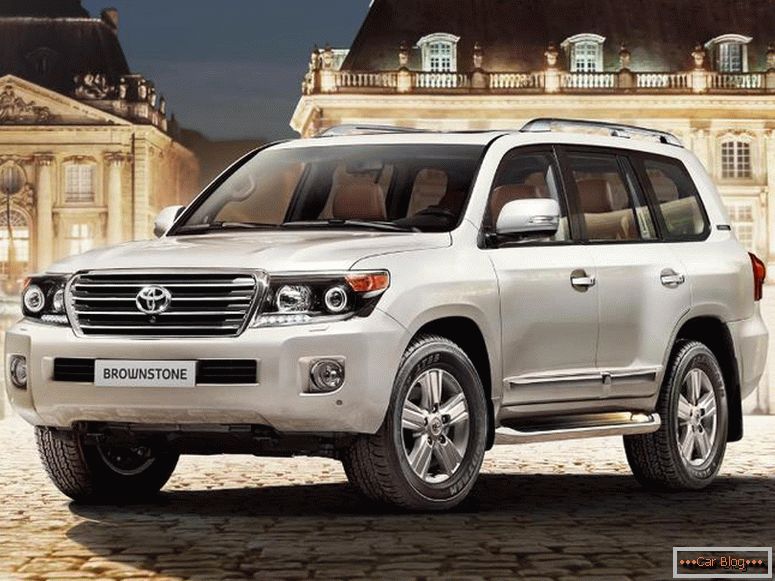 In general, the word “brutality” most closely matches the appearance. It is no secret that in Russia the Land Cruiser 200 is perceived rather as an image luxury car rather than an all-terrain vehicle. Most owners are hardly eager to drive their car on the present off-road.

What's in the cabin?

The trunk lid is divided into two sections. If you want to put something small, just open the top of the cover. In this case, the lower part will act as a side. If you need to load something large, you can fold the side, turning in the continuation of the bottom of the trunk and covering the bumper from possible damage.

Regular trunk volume - 909 liters. You can fold the rear row of seats, making the volume increase by another 500 liters, that is, for a whole amount of luggage Infiniti Q70. There are no niches under the floor - a full-size spare tire is hidden under the bottom of the car, providing additional protection against possible road shocks.

A large doorway, a special handle and a step make it easy for a child or an oversized adult to get into the passenger compartment. Chetrekhzonny climate, as well as heated rear row is available only in the seven-seater version. In a five-seater car, passengers in the back seat have to be content only with air vent vents, an armrest with cup holders and a 12-watt outlet. 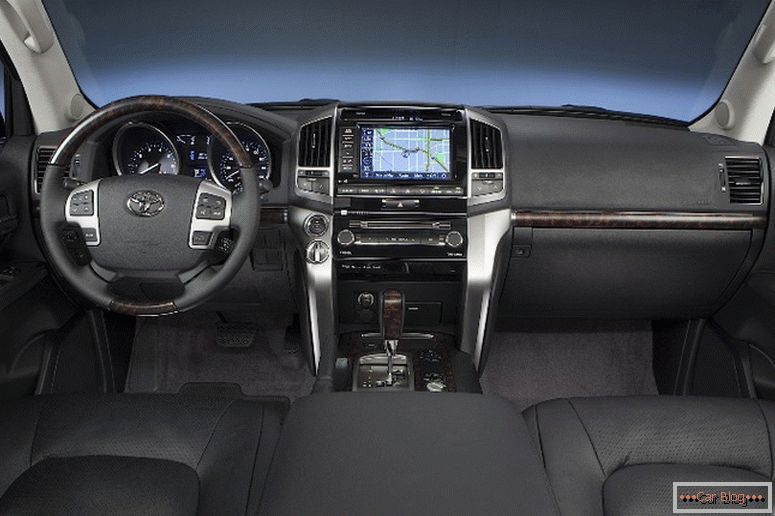 Something more is expected from a car with a similar price tag, but the convenience of the sofa itself and the availability of free space for the legs and head smooth out the situation a little. Due to the width of the car and the absence of a central tunnel in the back, three adults can quite comfortably accommodate.

The opening of the front door is comparable to the parameters of the rear, and therefore it is also quite convenient to climb the people. The front seats are electrically adjustable; driver and does remember the position for three people.

I lay down in a parlor Toyota Land Cruiser 200You immediately understand that all the interior decoration is made so that it is impossible to forget that you are in a huge car. Inside there is an atmosphere of gigantism, with which only the gear selector knob is dissonant.

The front panel is built with skill: and the eye pleases, and in terms of functionality will not disappoint. Particularly pleased with the multimedia system. Music and navigation is controlled from an 8-inch touchscreen display. No difficulties with the use should arise - everything is Russified and intuitively clear. The audio system includes 14 speakers and reads MP3 and DVD formats, so if you wish, you can arrange a real cinema show with high-quality sound in the cabin. 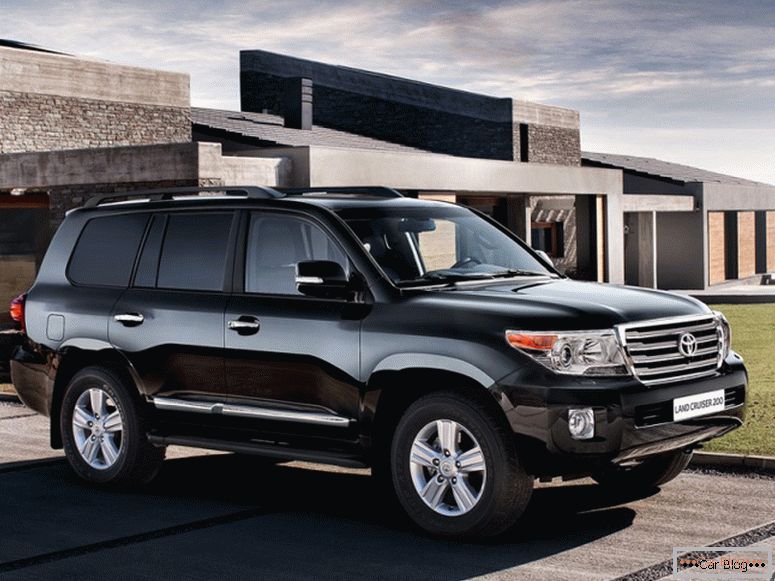 Special attention deserves a cooled armrest. It can easily accommodate a couple of liter bottles of liquid of any degree. The only minus of such a useful armrest is that it only works in a pair with air conditioning, so it is not recommended to use it in the winter.

With the ability to adjust the seat in 8 directions and electric steering at the driver's seat will be able to get a giant and a miniature lady. Despite the size of the car, the dimensions are felt quite well. If you want to squeeze very much into a bottleneck, you can use the system of circular view, which is implemented by placing several cameras in the side mirrors in front and behind.

Toyota Land Cruiser 200 Specifications look very presentable and impressive. The gasoline engine is a modified 4.8-liter V8 unit. It works in conjunction with a five-speed automatic transmission. The engine is distinguished by good work and steady progress, however, sports dynamics cannot be expected. Thanks to the KDSS system, the body roll when turning is significantly reduced.

The diesel version is represented by a 4.5-liter V8 engine, which comes with a six-speed gearbox. By increasing the strength and reducing the weight of the unit, it was possible to achieve optimum fuel utilization and increase the overall handling of the SUV. 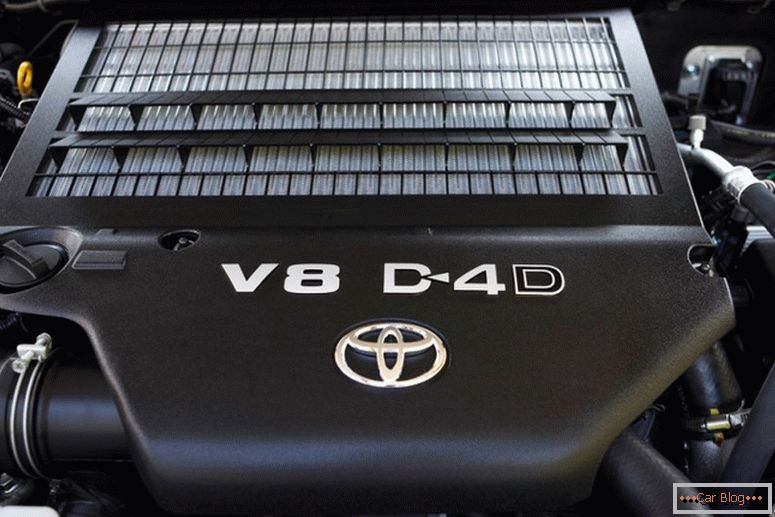 The version for the Russian market has slightly reduced power rates - 235 hp. instead of 286. But even such a lightweight version of a diesel engine makes the car more dynamic than when using a gasoline unit.

Immediately after ignition, you can hear the welcoming growl of the V8 gasoline engine. However, after a couple of tens of seconds, the momentum will fall, and there will be no other sounds in the cabin, except for a working radio. Soundproofing a car can really surprise. Even the sirens of official cars can be heard only at a distance of only a few tens of meters. Whether it is considered a plus, everyone decides for himself.

A little surprise can driving a cornering. But you need to take into account the dimensions of the car - it is not intended for sharp turns. In a straight line, the Toyota Land Cruiser shows a decent move. No irregularities of the landscape on the course of the car and the comfort of people inside are not affected. 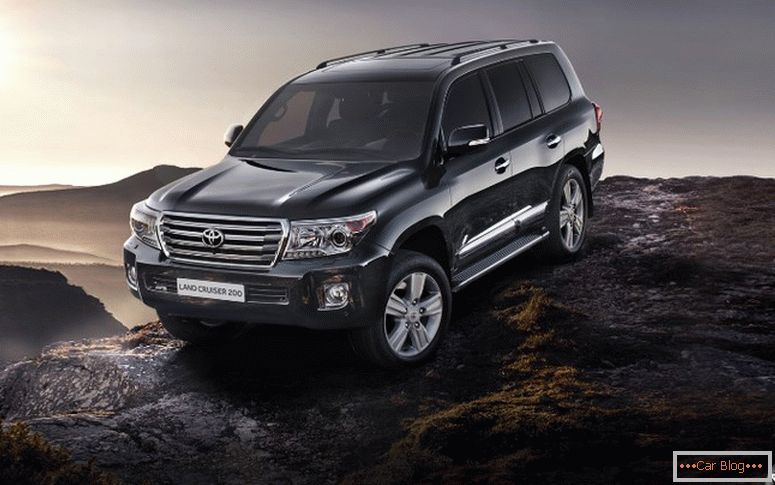 The car has only inter-axle locking. Added modern technology in the form of an advanced slip system and heaps of other electronic assistants. Ground clearance under the front bumper is 230 mm, under the rear - 240 mm. At its lowest point, the clearance is 225 mm. The maximum angle of arrival is 32 degrees, but you can move down from a 25-degree gradient.

But these are all numbers. In fact, the motorist will be content with a low gear, inter-axle locking and the Crawl Control system, which has three modes and is designed to help the driver cope with bad roads. The system independently controls the engine power and brakes, the driver can only hold on to the steering wheel, sometimes twisting it lazily. In addition, for the prevention of slipping and skidding is also responsible automation.

As noted above, there are three modes of operation of the Crawl Control system:

Low level is necessary for movement in the mountains, high is suitable for sand, grass or gravel. 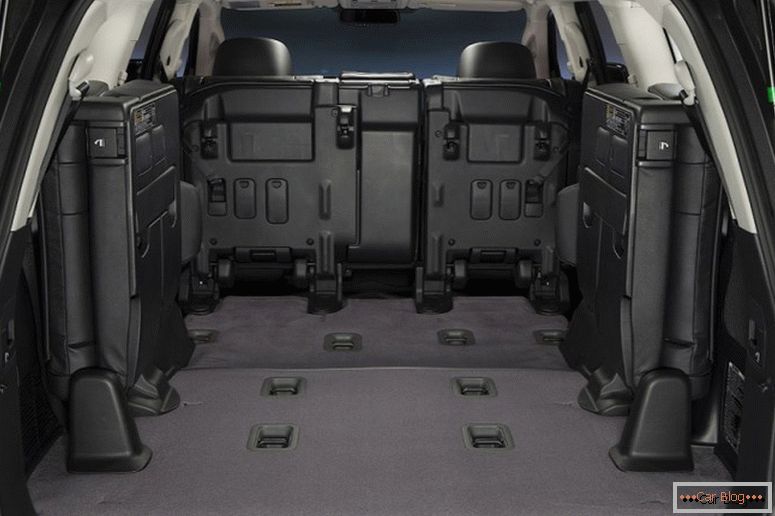 To a large extent, the presence and operation of the KDSS system affects the performance of the terrain. Automation takes into account the prenatal coating, changing at its discretion the mode of operation of anti-roll bars. When hit on off-road stabilizers are disabled. Full suspension travel does not receive any counteraction, respectively, road adhesion normalizes, and cross-country performance improves significantly.

As for safety, the complaints of specialists after a series of crash tests were caused only by the lack of protection of the driver’s legs during a frontal impact. In the event of anything, 10 airbags, special seats that protect the spine and seat belts with pretensioners should save from serious health consequences. 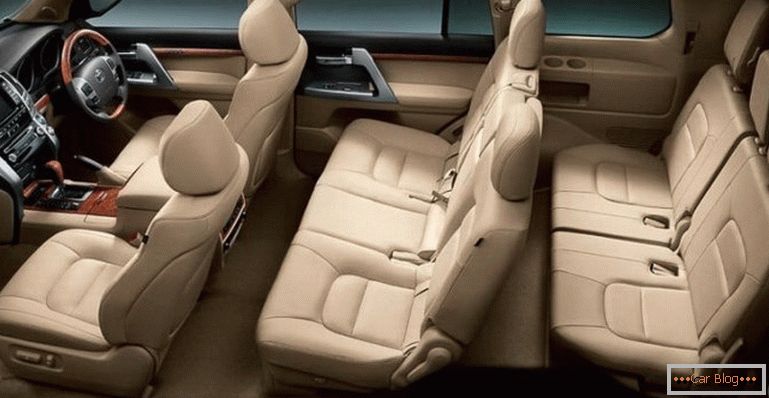 Using such a car in the city is a little uneconomical. The petrol version devours 25 liters per 100 km; diesel is content with 13 liters, which is still a lot. Parking will also be a problem - the car simply does not physically fit into a standard place. But for the wealthy hunters, fishermen and travelers, the Toyota Land Cruiser will be an excellent companion that will leave a lot of positive emotions even in the most extreme conditions. 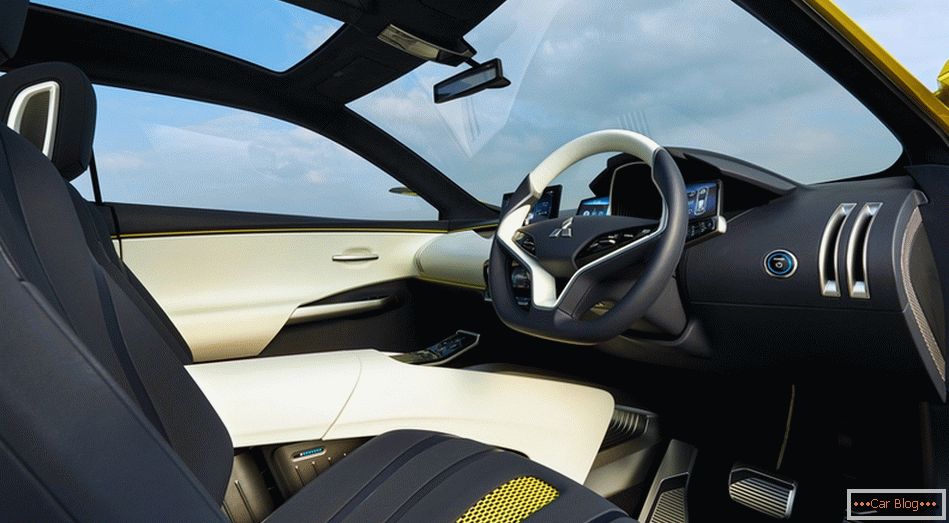 In the near future, mitsubishi promises a fundamentally new 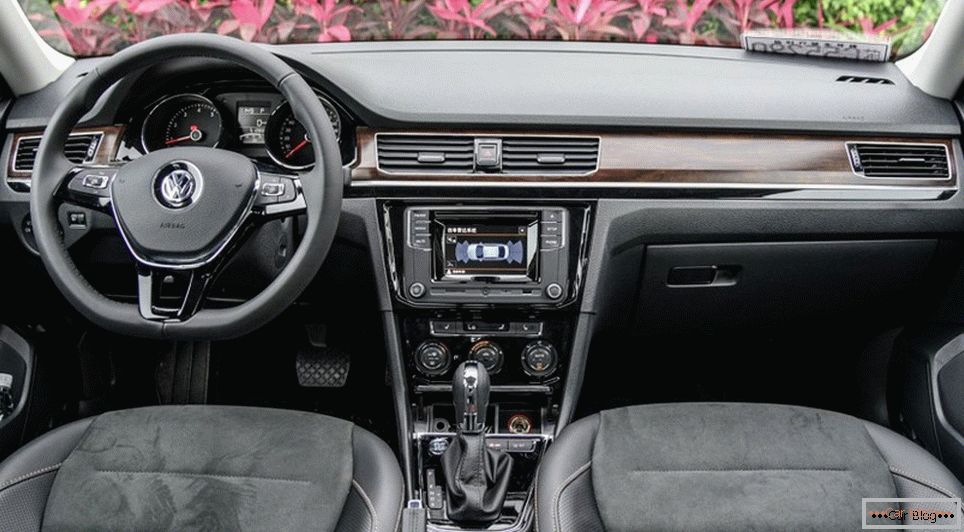