The theme of our review is the Toyota Land Cruiser 80. This series was created for those who want a real "serious" jeep, but there is no money for the 100th and 200th. Although these cars were developed in the nineties, even now they bypass some of the more modern models of jeeps by some parameters. Immediately after entering the global market, these SUVs became revolutionary. They combined excellent performance, reliability and comfort that many predecessors and competitors lacked.

Why 80-ka still enjoys such popularity? In order to understand this, you need to dig a little deeper, having read the history of the creation of this car.

Toyota, developing a promising new jeep in the 80s, tried to create an “armored train on wheels” that would feel equally comfortable in the snow, in the desert, with any quality of road surface, regardless of climate and other nuances.

After the “Toyota War” of 1986, the conflict between Libya and Chad, Japanese manufacturers realized that they had underestimated the potential of their own products. Based on the best practices, they created a platform that is not inferior to the "immortal" Hilux, which in the Top Gear program could not be finished off either with drowning, or fire, or falling from a blown up house.

What is interesting, they almost succeeded. Of course, 80-ka, it is not such a weapon of the apocalypse, as mentioned above pick-up, but the tasks before it were set somewhat different. Still, buyers are unlikely to put on it anti-aircraft missile systems and recoilless guns. 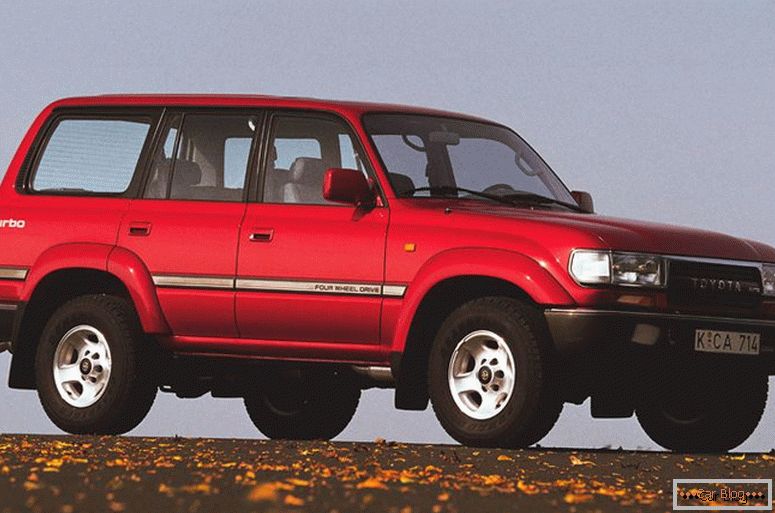 It is very easy to distinguish a car created before restyling and after. Toyota is written on the old version on the grid, and since 1995, instead of writing, they began to use the brand logo.

These machines were so rarely broken that for many they actually became the benchmark of “unkillable” cars for the most difficult conditions. So, suppose you decide to buy such a machine with it. What should be feared, what is better to pay attention to?

Rusting elements of the body and frame

In terms of rust, the owners of the Toyota Land Cruiser 80 are very lucky, because the manufacturer chose very high quality materials. The machine is not afraid of reagents used to combat ice. However, there are places where rust exists, but once it appears, it does not grow, like mold. For example, you can often find it on the air in the frame and on the metal frames of the rear windows. 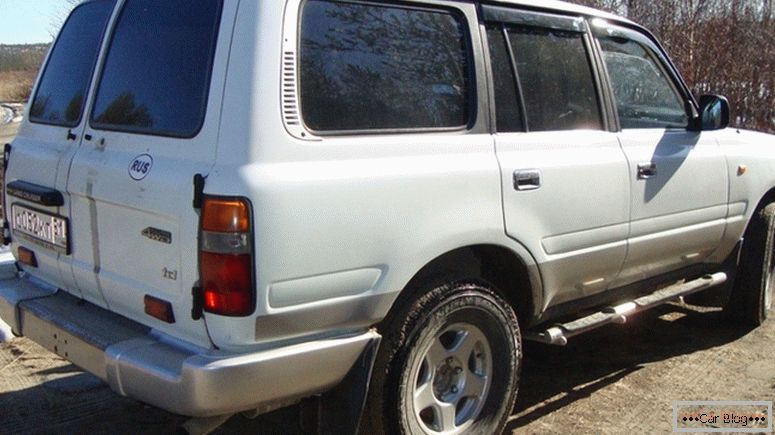 Another common problem is the souring of an external retractable antenna in contact with dirt. No prevention here helps.

Sometimes a radiator can get clogged up in the cabin heating system. If you do not understand, you might think that the stove is broken and you need to change the motor.

Salt is detrimental to pipes that go to the air conditioner / oven. Do not forget that the sliding hatch does not need to clean the drain channels.

Which finish is better?

Most of the cars in the "base" were produced with vinyl. It’s not that bad, but it’s not an ideal option. But on STD, most often, it is he who meets. 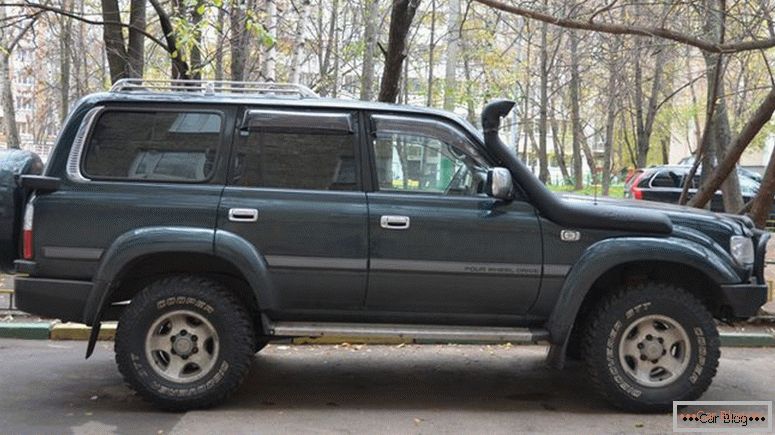 There are quite a few “eight-dozen” lovers who, with foaming at the mouth, prove that nothing better than nature can be better than a leather interior. Leather is beautiful, prestigious, but not practical. Especially when the car went third decade. Caring for it is required, and without it, the material dries and becomes covered with small cracks. In addition, this material is not the most pleasant to the touch. And in the winter to sit on such a seat is banal cold. Leather trim typical for Toyota Land Cruiser 80 VX. On other versions, you are unlikely to find it.

The best option for quality and comfort will be velor. It is warm, soft, and, with careful handling, durable.

Types of transmissions and their features

This jeep was made with permanent and all wheel drive. The Achilles heel of the 80s is considered the front axle. Prophylactically, it is recommended to change the drives and other parts every 120-150 thousand km. Of course, if the money is very tight, there is an option to temporarily save, buy only "grenades", oil seals and support bearings. But, if you do not want to face a lot of problems in the foreseeable future, change / repair everything, including the axle gearbox. 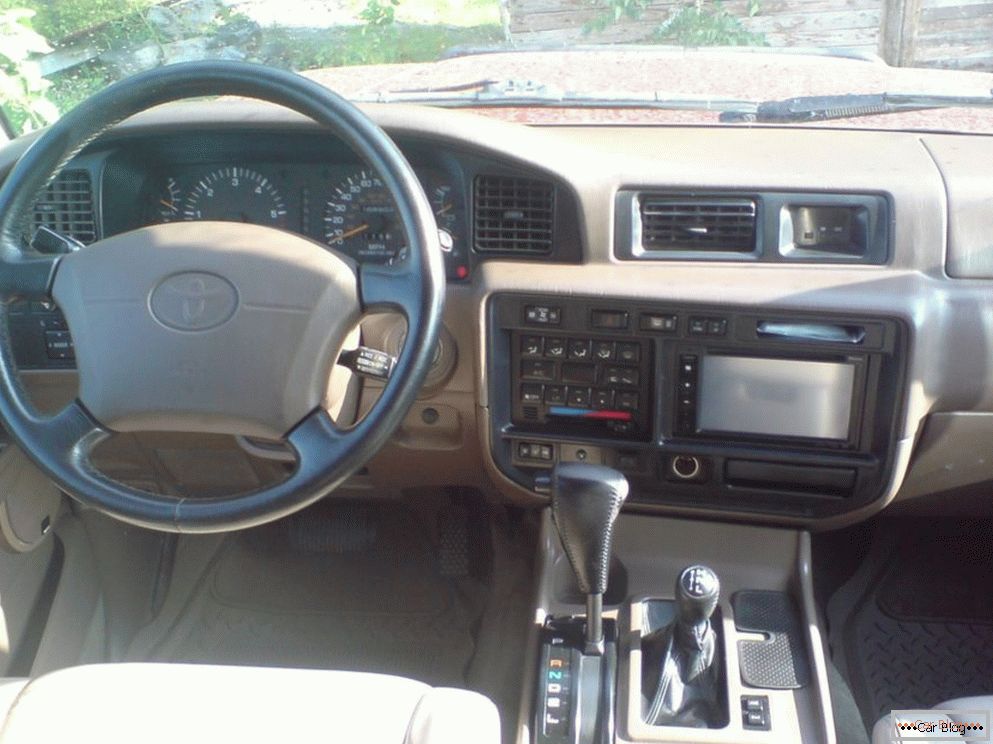 If you are lucky, and the springs on the car have not sunk, you can put the 32-inch wheels without making an elevator. KP mechanics, razdatka and rear axle are reliable, and will serve you for a long time. Automation can sometimes be a shock when the gear shifts from 3 to 4. But this should not be considered a malfunction. During the inspection, it is better to change the lubrication of the drive shafts and crosses. Then the replacement will not take very long.

Speaking about the technical characteristics of the Toyota Land Cruiser 80, it would be strange not to mention which power units are installed on this jeep. These are 6-cylinder petrol, diesel and turbodiesel engines. 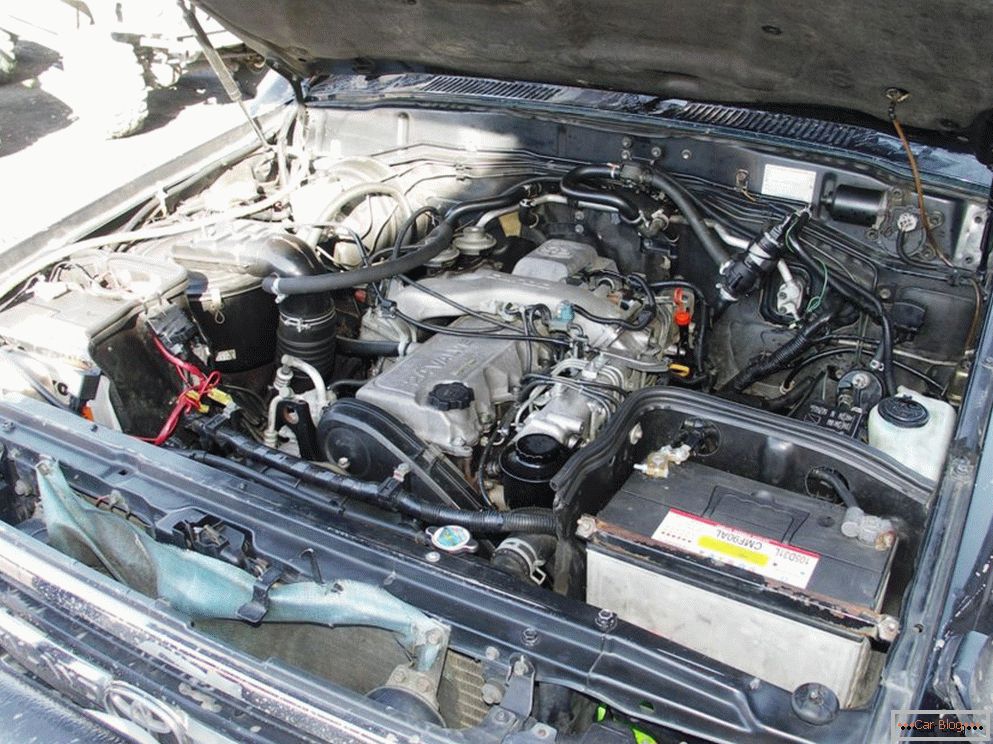 According to most experts, it was the benzomotors that were the most enduring. At the same time, they are unlikely to cost more expensive maintenance of diesel engines. If you, of course, do not use the machine 24 hours a day, 30 days a month.

Service for oil is cheaper than gasoline. It takes 8 liters, and the diesel is 11. Another huge plus is that on gasoline units there are chain drives for the gas distribution mechanism, which are clearly more reliable than belt drives on diesel engines.

The injection pump on diesel engines is subject to repair. Only here specialists who can work properly in setting up fuel equipment may not be found in your city. Sometimes it's really easier to buy a new carburetor for 300 bucks.

Take for example the technical characteristics of the Land Cruiser 80 with a turbocharged diesel engine 4.2 l. / 135 hp and permanent all-wheel drive. This is a full-size five-door jeep. Body length - 4.97 meters, width - 1.83 m, height - 1.96 m. Permeability ensures not only the presence of a full drive, but also a clearance of 22 cm

The car has a comfortable large trunk of 832 liters. If you fold the rear row of seats, we get more impressive 1368 liters. This is quite enough to take a couple of tents, a folding barbecue and other things out of town. The curb weight of the machine is 2.22 tons, and the total - 3.06 tons. 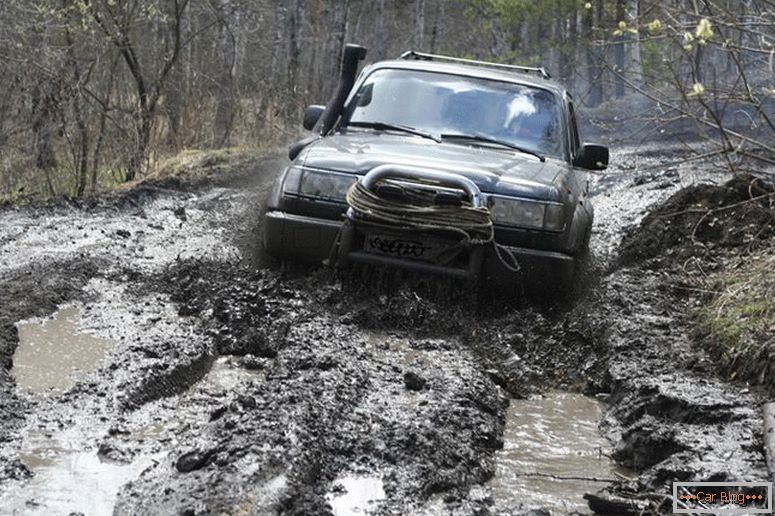 This modification was produced with 4-speed automatic or 5-speed mechanics. Both boxes, as mentioned above, have a good margin of safety, and serve for a very long time, if used correctly.

Disc brake type was used. The front wheels are ventilated. Complaints about the breakage of the brakes are found only among those owners who forget to check the system status on time.

The car is considered expeditionary, and is not suitable for the trophy. Also, it is quite possible to use it as a family wagon, where you can ride around the city, to the country, and for any business matters.

The most obvious advantage of a diesel engine is that it quite successfully drives on domestic fuel. If THEN the car is carried out regularly, the engine will work properly.

How to choose a Land Cruiser 80 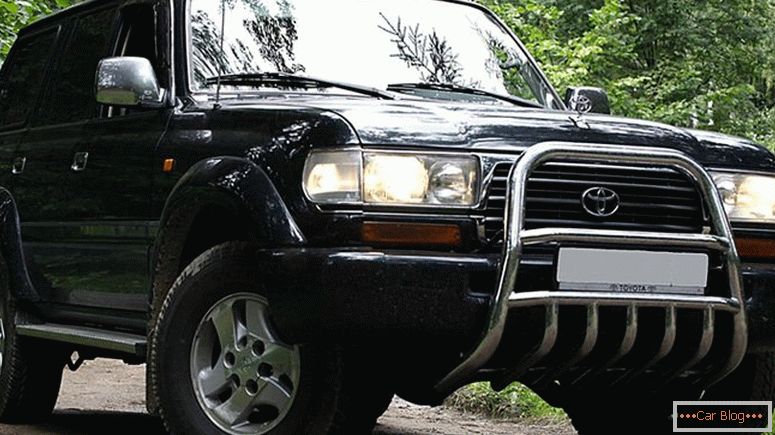 When the car is more than 10 years old, in any case you buy it at your own risk and peril. Very often there are cars that, before selling, put them in order, tint, etc. But their suspension can crumble right on the road. Remember that there is no guarantee and service.

So, choosing "Kruzak", you have two options:

Sometimes they come across cars from owners who really blew specks of dust. Of course, this is rare, but if you become the happy owner of such a Toyota Cruiser 80, you will be able to travel another 10 years for it with careful operation.

Great luck will be to find the jeep of the last year of release. In 1998 not many copies managed to get off the assembly line. Indeed, in March, the assembly stopped.

If you look at the prices, they can vary in the range of 1-3 thousand dollars. For example, in the market there are cars in 1996 with mileage within 200 thousand km. This is a diesel version with manual transmission. A good 24-valve engine will last for many years. It costs an average of 15-16 thousand dollars.

Come across offers and cheaper. For example, 7.99 thousand dollars for Kruzak 1992 release. Mileage 254 thousand km, which is very modest for this age. 4 liter gasoline engine, automatic transmission. For the money you get a car from one owner. There is a sunroof, air conditioning, cruise control, audio system, alarm system.

Sometimes for 17-25 thousand dollars real masterpieces come across, which the owner not only perfectly contained, but also tuned. 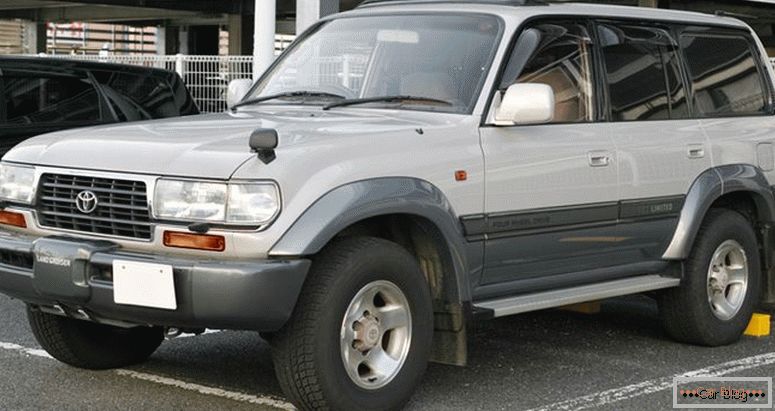 What will have to change?

After about 150 thousand km. mileage requires replacement of silent blocks suspension. This should be done even in the event that the details look not too worn out. Otherwise, after a while you will notice that the car starts to be worn from side to side. If you are lucky to buy a Land Cruiser 80, in which the previous owner recently changed not only the silent blocks, but also the traction with shock absorbers, you can relax. These parts are robust and replacements require every few years.

If oil leaks from the steering gearbox, there is nothing to repair. Going through - it's more expensive, it is better to buy a new one, than after another 10 thousand km. again scold the Japanese manufacturer and all its relatives.

Can fly power steering pump. The reasons are different. For example, the owner forgot to change the fluid, or perederzhival wheel in the extreme points.

These machines began to be produced at the end of 1989, and they were produced until the spring of 1998. It was difficult to find 80s technique, and the state leaves much to be desired. But the cars from the nineties much more interesting. It is better to take a car that had one owner, so there is definitely less risk of getting on a new-looking jeep, but broken inside. 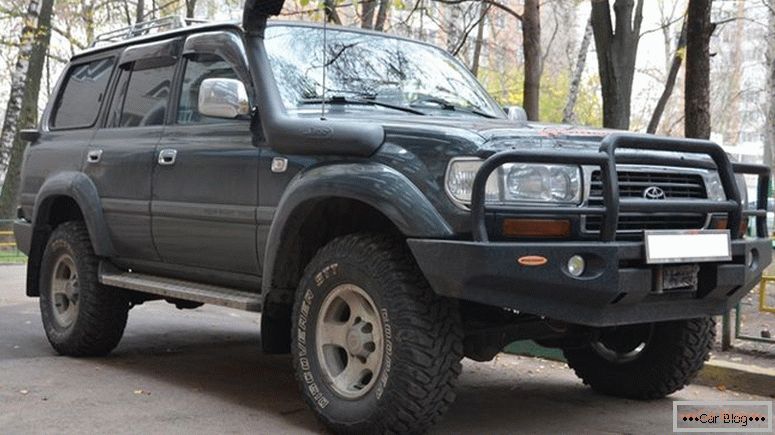 If the owner passes the MOT regularly, every 10-15 thousand km, the car will most likely be in very decent condition. During operation, they usually change the shock absorbers and silent blocks, sort out the front axle. Sometimes repair the steering. If planned inspections were ignored, there is a great risk that you will have to invest as much money in Toyota 80 as it costs. So you have to

If the car has passed more than 350 thousand km, there is a great risk that there are “nuances” in it that you will not see, even looking under the hood. What to do? 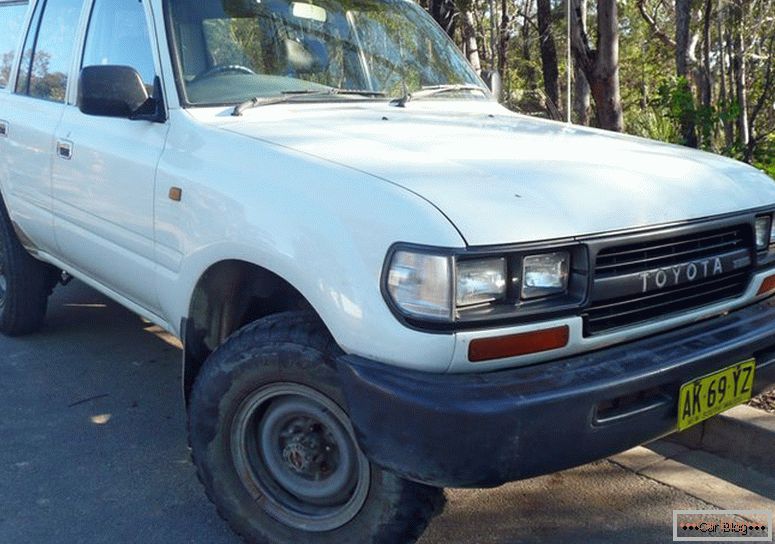 In general, there are few problems with this jeep, and the permeability and excellent technical characteristics of the Toyota Land Cruiser 80 make it a sensible choice for those who want a reliable “workhorse” for reasonable money. The jeep was made in those times when the metal was not spared on the body, and the paint on it withstood any tests.

We wish you success in your search. If you manage to find an inexpensive option in good condition and with low mileage, take without hesitation. The most popular among fans of "Kruzak" are diesel versions. They turned out the most enduring and reliable. However, come across and adequate options for gas / gasoline. 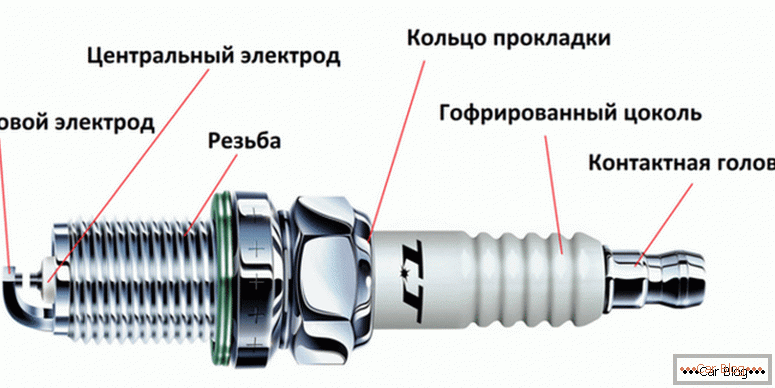 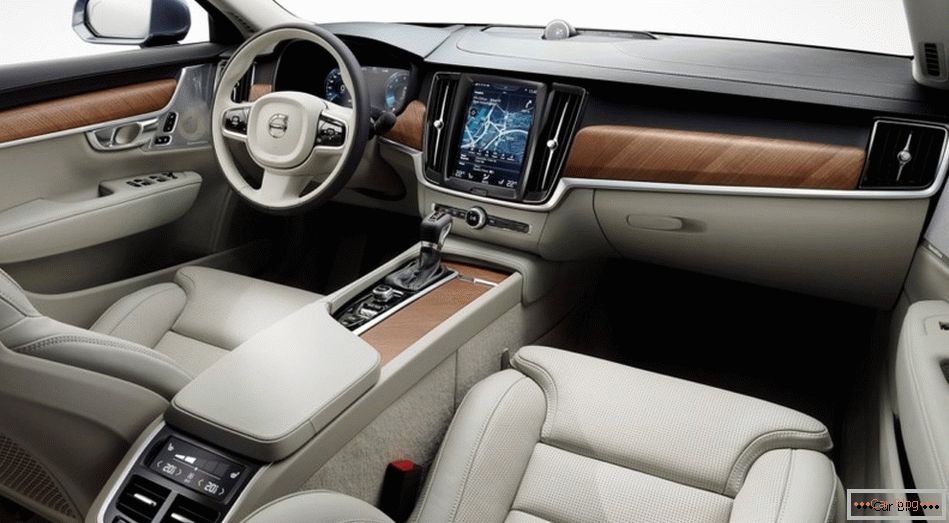 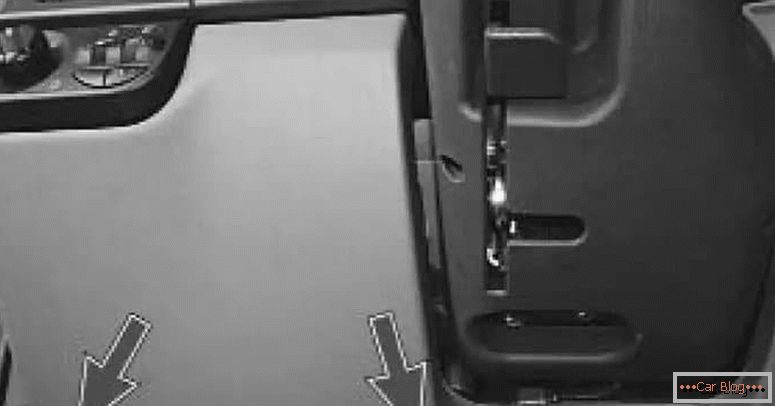