The best cars from japan

In Japan, the auto industry loves to amaze with its new products. By releasing high-quality cars to the external and domestic markets, developed using sophisticated technologies, using luxurious, expensive materials and for a good price, Japanese cars compete well with German and American cars. 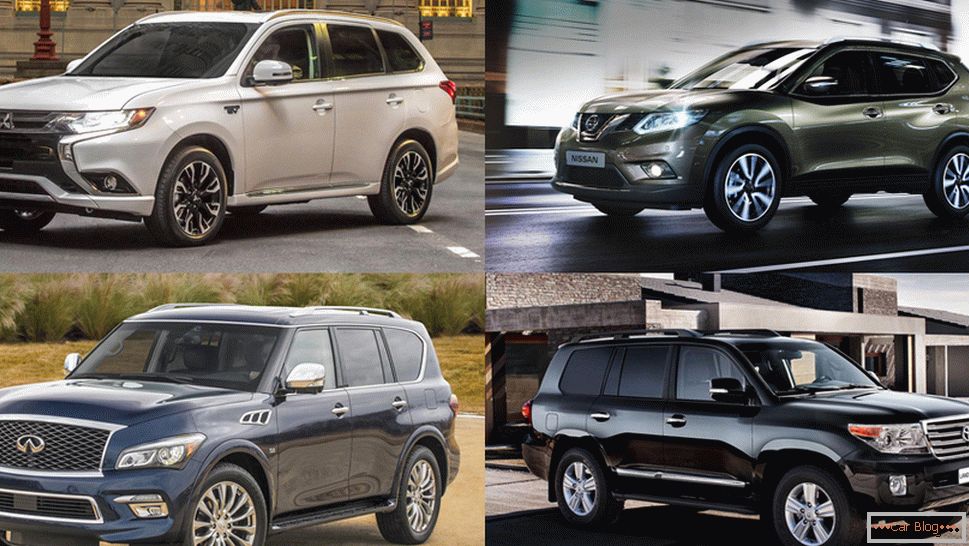 Considering the reliability indicators, one can say with confidence that the best car is Japanese. They perfectly tolerate the climatic conditions of Russia and are in great demand in the domestic market. Many different brands of Japanese cars are offered at official dealerships throughout our country. Customers appreciate cars made in Japan for their comfort, reliability, and corrosion resistance, which is important in the conditions of long winters and high humidity.

Lexus is the American division of the Japanese company Toyota. Originally produced cars of this brand were planned for export to the United States. However, over time, these cars have become very popular in other countries, and especially in Russia. Without exception, all cars of this brand belong to the class "premium" in their driving qualities, as well as reliability and the highest level of comfort.

Today, the Lexus brand is exported to more than 70 countries of the world. The model range is very wide, ranging from sports cars and ending with crossovers, as well as a large SUV Lexus LX570. 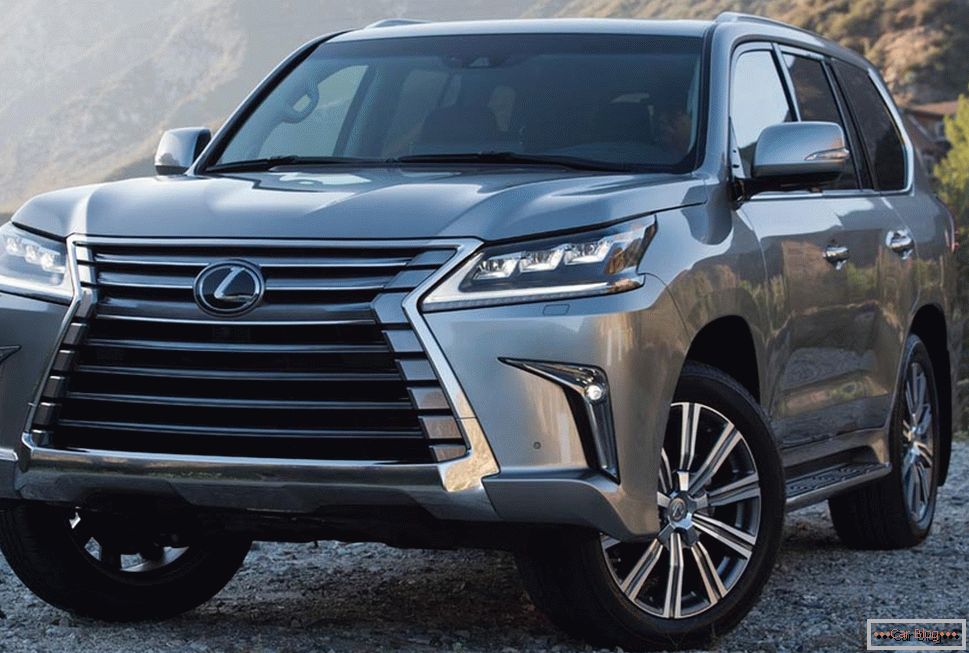 Designers have tried to give a massive car a more attractive look, but the perception of the model remains the same. Thanks to the clear grille lines and the sharp-looking front optics, as well as some qualitative changes in the interior, the car became even more comfortable and not as brutal as the former model of the best Japanese car.

The interior is all made of leather, natural wood and high-quality plastic. The package is extensive and includes all sorts of electronic assistants that make it easier for the driver and passengers to travel in a prestigious car.

The car is equipped with a powerful diesel engine of 4.5 liters. The power plant shows the power of 272 liters. with. Recall that this is the first facelift model that goes on sale with a choice of diesel engine. Previously, all 570s were supplied only with gasoline versions of the engine with a capacity of 5.7 liters and a capacity of 367 liters. with. The fuel consumption of the petrol version is colossal (15–17 l / 100 km in the combined cycle).

The price of the basic configuration in the Russian market is 6,430,000 rubles.

A trademark that belongs to the Japanese car company Nissan. Infinity cars went on sale in the domestic market only in 2007. Without exception, all technical vehicles “Infiniti” are based on the Nissan FM proprietary platform. The only exception is a large SUV - QX80, in our country, this "iron horse" is in the top 10 best-selling SUVs. 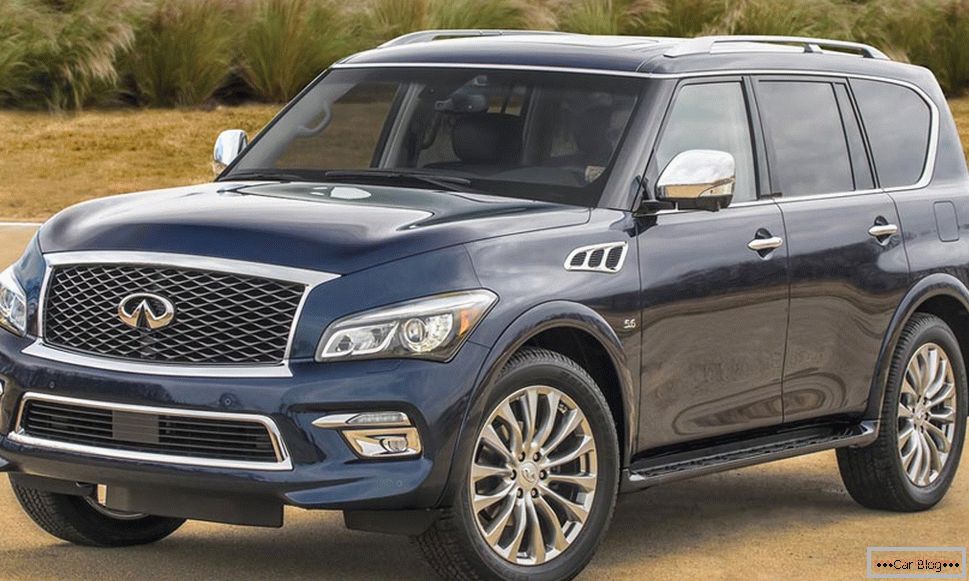 The Japanese car in its size belongs to the class "K3", and exceeds the dimensions of the Lexus 570

Restyled model went on sale in 2014. The model received a new LED optics, a spectacular grille, plus an additional three colors of the body to choose from in the color palette.

Chassis - complete independent suspension on air bellows. Installed a new system of suppression of rolls on the turns. Instead of anti-roll bars, the Hydraulic Body Motion Control system is used, which hydraulically makes the car stable at high and low speeds.

Better than Toyota - only the new Toyota Land Cruiser 200 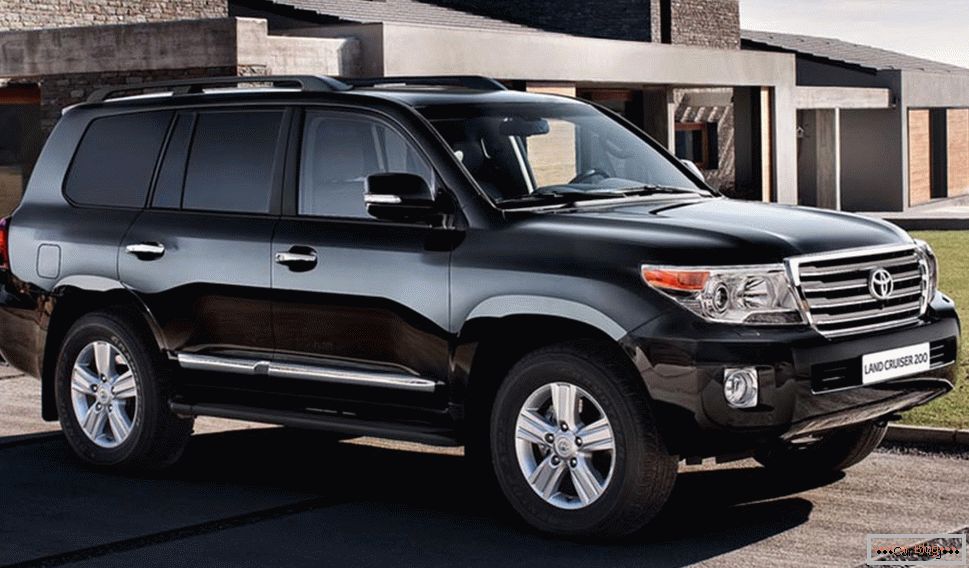 adom.ru the choice of a gasoline or diesel power unit 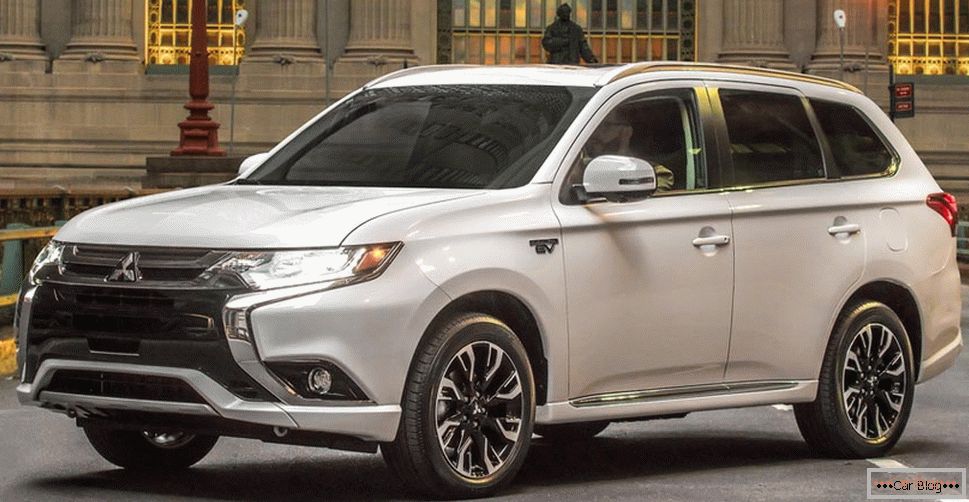 Outlander - a small SUV belonging to the class K1

The real estate model appeared in 2016. The Japanese annually release to the market updated versions of Outlander. The front of the car has its own name - Dynamic Shield, which means (dynamic shield).

A 2.4-liter gasoline engine with an output of 168 liters is standard on the car. with. Also available is a 3-liter 227 liter. with. and an automatic transmission on 6 ranges.

The Japanese corporation "Nissan" is included in the list of the ten best Japanese companies that operate in the Russian market. A prominent member of the family is the Nissan X-Trail. The crossover belongs to the K1 class. The debut of the third generation took place in 2013. 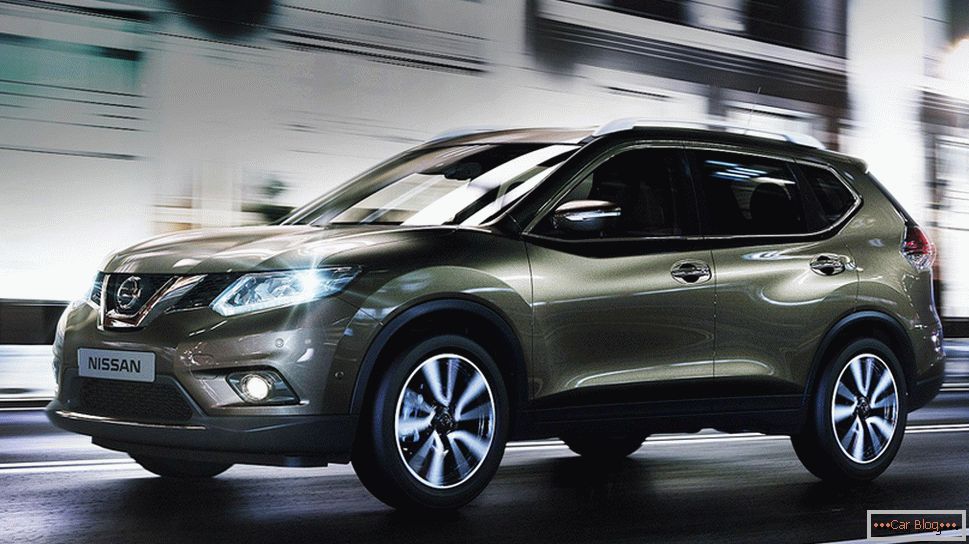 Over its design fairly worked hard

Rear light optics based on LED lights and made in the form of "boomerang". Front running lights also got LED backlighting. The third row of seats is available on the X-Trail model. However, if it is used for its intended purpose, then there will be practically no space in the trunk. In the third generation, the Japanese have improved the quality of materials used for interior trim. The company's engineers have worked on the mechanical component of the car. The output turned out to be an excellent vehicle that slightly falls short of the premium segment of the Nisanov brand - Infinity.

All-wheel drive car, with the installed All Mode 4x4i system, borrowed in the previous generation. Control between modes of movement is carried out by the "twist". Four-wheel drive can be turned to Auto or Lock off. Off-road driving mode Auto - engages all vehicle wheels. In addition, in this mode, the on-board computer monitors the amount of fuel supplied to the engine to ensure stable torque to the wheels and prevent wheel spin on wet soil. In Lock mode, we get a full hard drive with a uniform distribution of torque between the wheels (the mode is usually used in difficult driving conditions).

An advanced Active Ride Control system is installed on the car, which controls the stiffness of the shock absorbers depending on the traffic situation, speed and body roll. The Active Engine Brake system provides the necessary engine braking. The onboard Active Trace Control system assists the driver in overcoming sharp turns.

Nissan X-Trail is completed only with a 1.6-liter diesel engine with a capacity of 130 liters. with. While providing 320 Nm of torque. Oddly enough, the gasoline engine is very economical. According to the passport data, fuel consumption in the combined cycle is 4.2 l / 100 km. 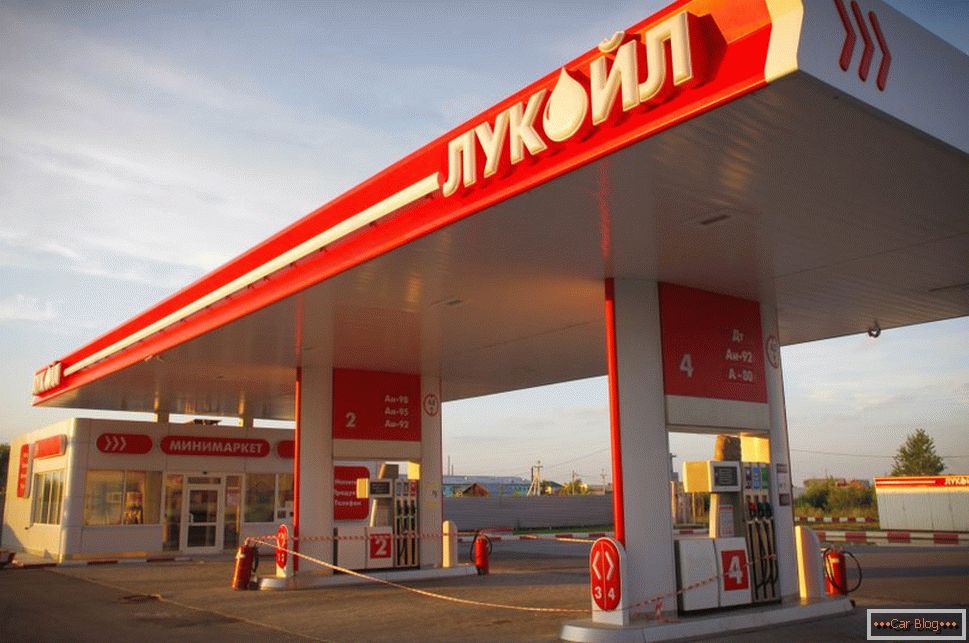 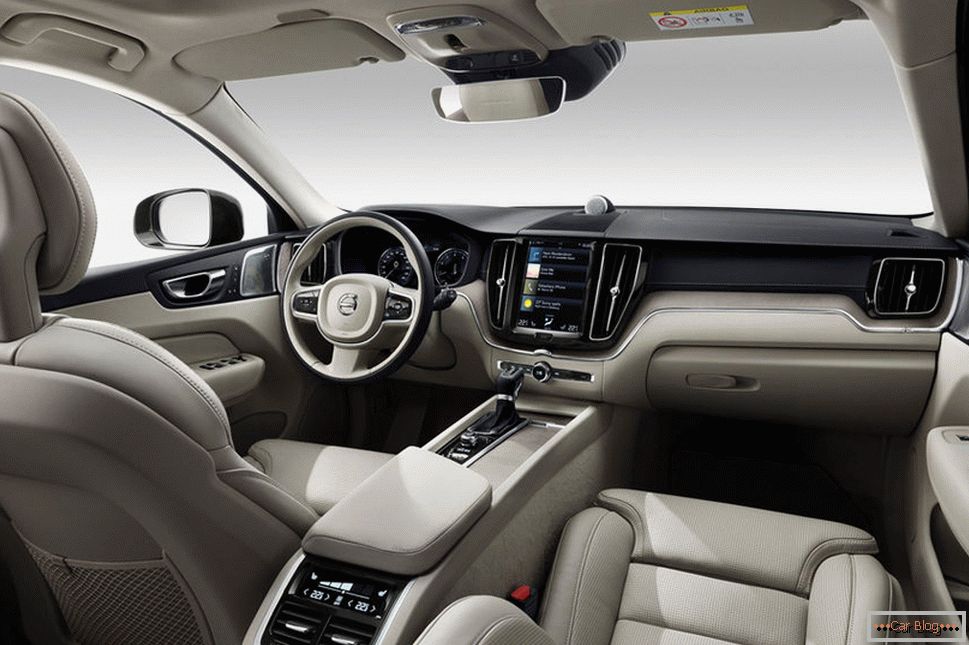 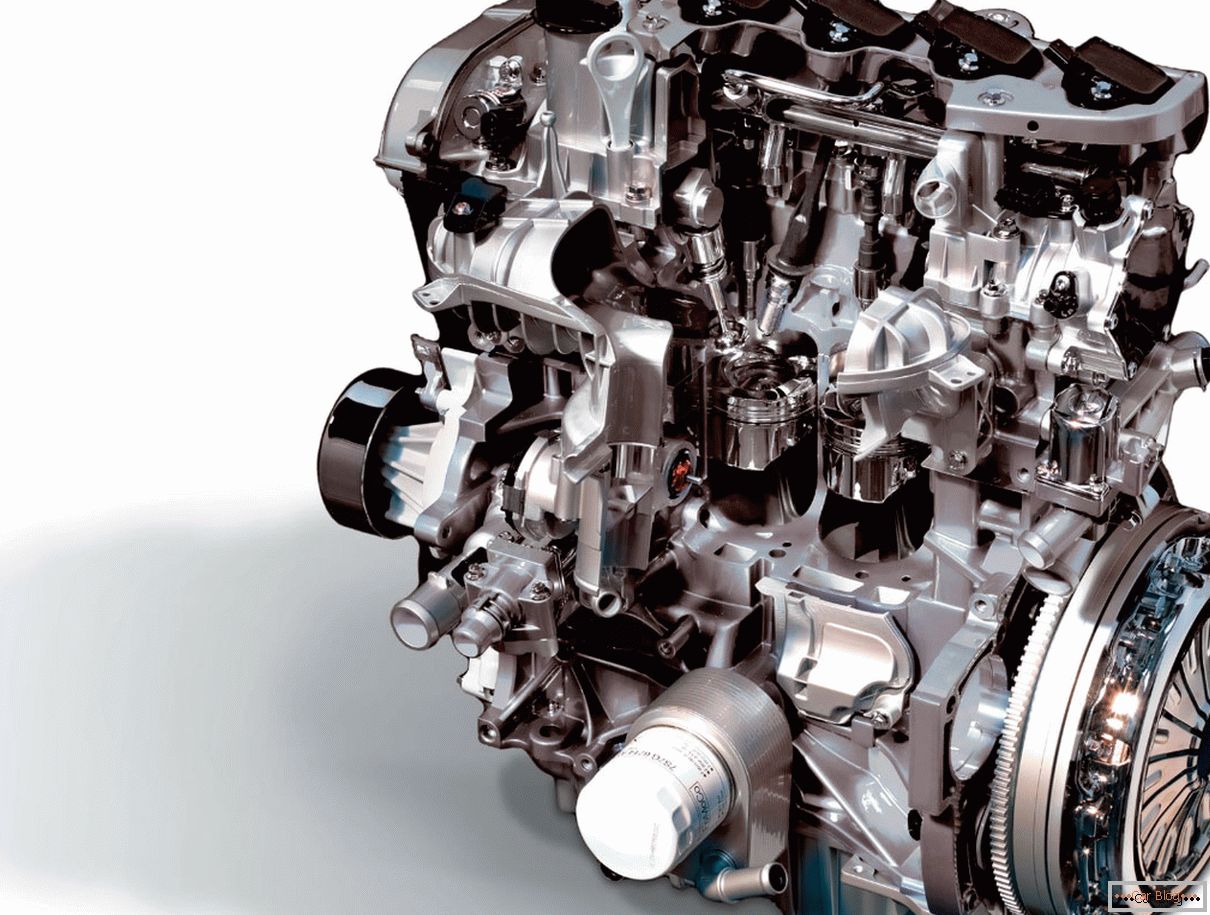