Like any other vehicle assembly, the fuel system will, under certain circumstances, require repair. Malfunctions of the Solex carburetor 21083, as a rule, occur due to improper adjustment of the fuel system, poor-quality fuel, operating conditions, etc. 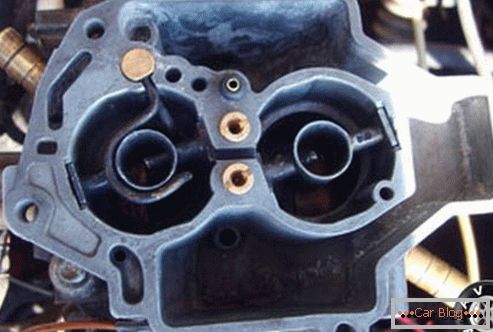 Consider the main causes of failure of the Solex carburetor 21083 and how they can be determined.

In the carburetor Solex 21083 malfunctions can occur when worn parts, when a pair of piston oil and crankcase gases begin to fall into the cavity above the carburetor, which leads to clogging of the filter element, then it all settles on the jets and other carburetor elements, which makes them difficult work 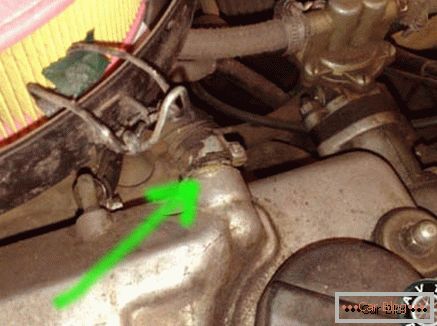 If there is a flow of fuel from the pump cover, then in this case, probably, there is a discharge of the diaphragm in the accelerator pump, which must be replaced.

The accelerator pump sprayer can become clogged, this can be checked by simply pressing the gas pedal with the engine off, if at the moment of pressing the distributor does not appear to have a smooth stream of fuel without air bubbles, the reason is obvious.

Typically, this may be due to:

The absence of fuel in the float chamber is determined by checking the presence of the mixture at the entrance to the Solex carburetor 21083. Further, if fuel is supplied, it is necessary to check the locking needle and strainer in the carburetor, then check the fuel pump, etc. 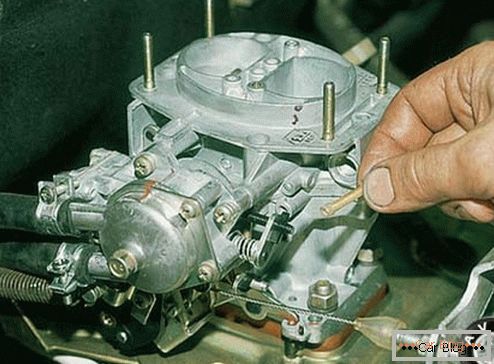 Disassembly and assembly of the Solex carburetor 21083 in this case should be done carefully and in the correct order. Otherwise, during the assembly process, you will be able to break the installation of the Solex 21083 jet nozzles, filter, dampers, etc. That will lead subsequently to unstable work of the carburetor or its breakage.

The lean mixture is determined for the following reasons:

If there is no fuel in the chamber, the float and the good fuel pump can check the throughput of the carburetor, and directly the hose supplying the fuel to the carburetor.

Next, check the strainer and the condition of the needle fuel valve. It is unlikely that the needle can be stuck in the closed position, it is only possible in the absence of a pull-off bracket that connects the float to the valve needle, or if the needle is heavily worn. 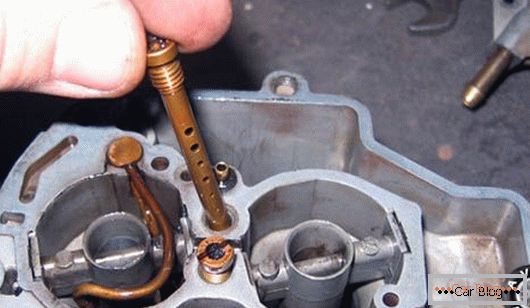 The mesh clogged filter is washed with a solvent or acetone, and it is previously removed from the carburetor body, the filter is blown through with compressed air and set in place. The failed fuel valve must be replaced with a new one.

Further violation of the supply of the mixture can be determined by the position of the air damper. Possible sticking of its drive thrust, lever, axle, malfunctions associated with the starting device or incorrect adjustment.

Depletion of the mixture can be caused both during operation and when the engine is started, with a low level of fuel directly in the float chamber. There may also be air leaks in the exhaust manifold, where it is connected to the carburetor. 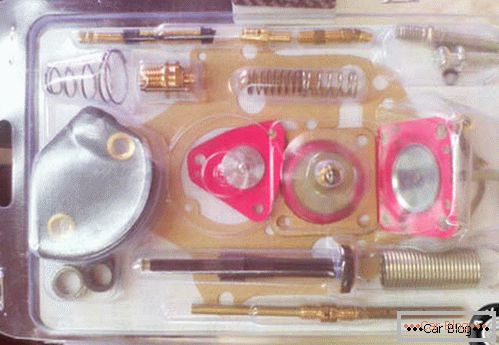 In winter, at negative air temperatures, there is a possibility of water freezing directly in the fuel line and carburettor channels, blocking with ice plugs, or freezing in the zone of diffusers of mixing chambers. As a result, there will be a stop or drop in engine power.

Unsustainable turnovers or lack of idling

With proper operation of the Solex 21083 carburetor systems, clogging of channels or nozzles is possible. Damaged rubber seal rings of quantity and quality screws, loose valve solenoid: this is all the likely cause of unstable car operation.

If there is an EPHH system (electronic idle adjustment system), then malfunctions are also possible due to incomplete tightening of the fuel jet holder, damage to the solenoid valve or control unit, as well as damage to the economizer diaphragm.

Since the idle transitional system is combined with the first camera system, then at unstable idling speeds the probability of the engine stopping or failing when the car starts to move smoothly. Clogged channels are flushed and washed after partial disassembly of this carburetor.

Reduced or increased speed, unstable operation of the motor in idle mode

These causes can be caused by improperly adjusted fuel levels, idle, or excessive air suction. Wear and improper adjustment of the dampers in both the first and second carburetor chambers may also affect this. 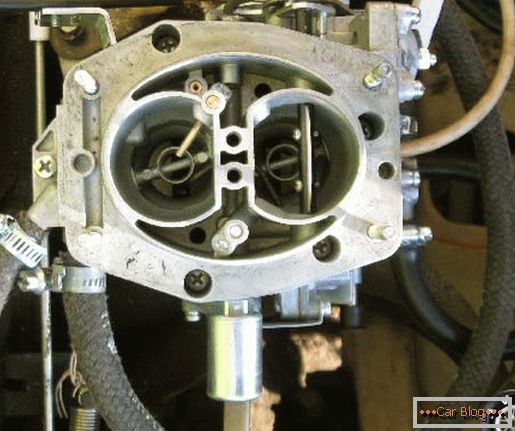 Difficult to start the warmed up motor

The most common cause is elevated fuel levels or over-enrichment of the mixture. This may not be due to the leak tightness of the fuel valve or improper adjustment of the float mechanism. Usually with the wrong tuning with your own hands this can happen.

That is why it is worth asking for help from qualified specialists who correctly and accurately perform all repair and adjustment of the Solex carburetor 21083, because it is professionals who know a lot about carburetors of various modifications, such as Solex 21083 1107010 and others.

You can also view a detailed description and video about the repair of the Solex carburetor 21083, where the entire process of assembling, disassembling and repairing the carburetor is clearly presented. 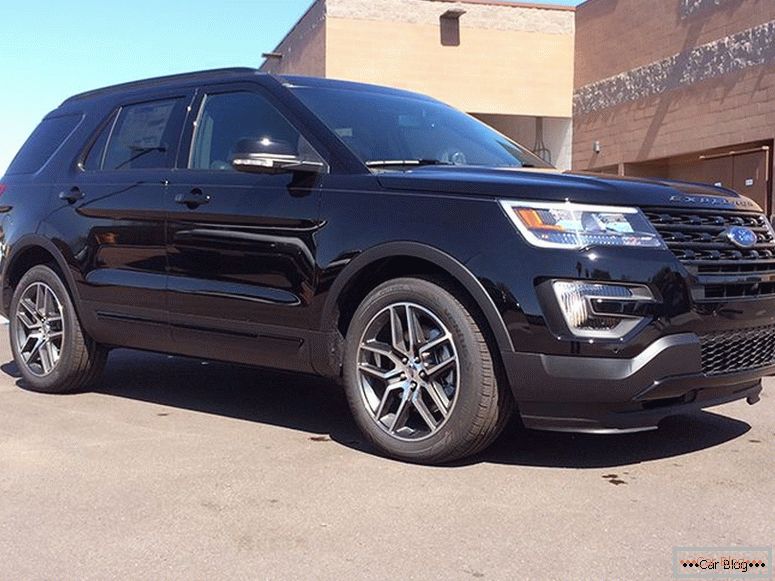 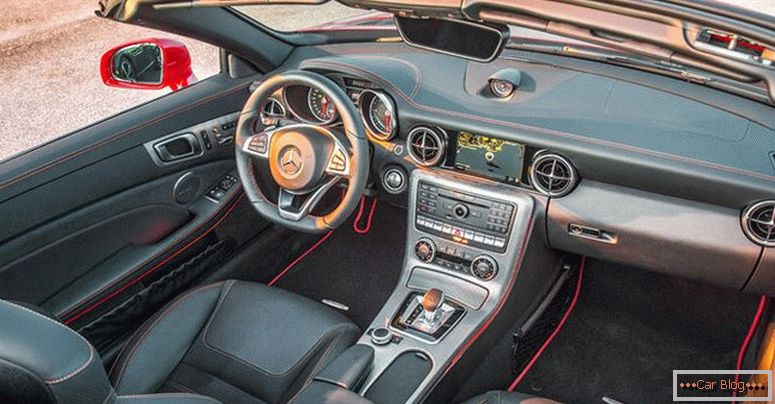 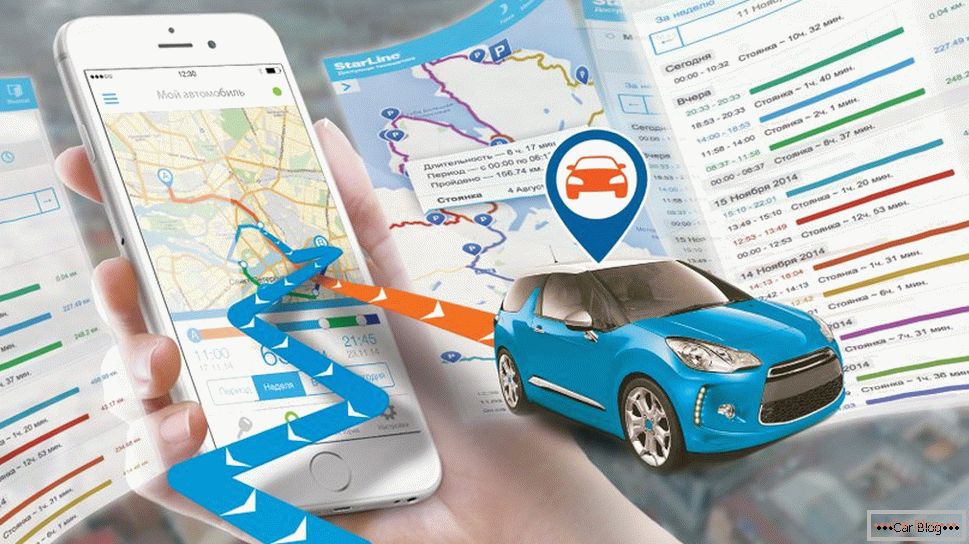