Today there are many the most non-standard hatchbacks, each of which is made exclusively in its own style. These include the well-known Toyota Auris and Seat Leon, which we want to present to your review, dear reader. We will conduct a comparative test of non-standard golf class hatchbacks in order to identify the best of them. 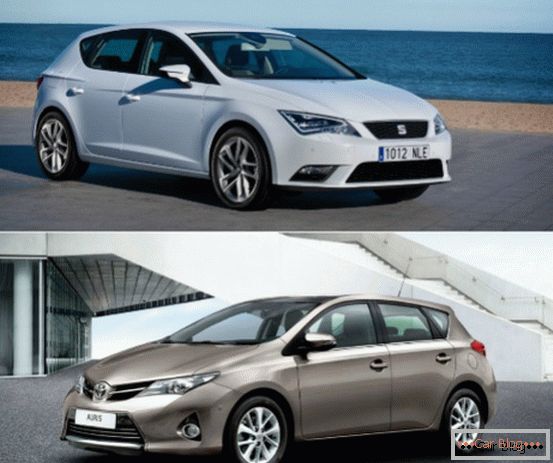 The Japanese hatchback has received such a high level of popularity due to its modern creative design and cost-effective value. If we talk about the Auris hatchback today, then it is worth noting that this is not quite a classic car choice. Most Toyota owners are more rational people and are used to making linearly profitable choices.

The Spanish hatchback Seat Leon on the national road expanses is extremely rare. For the world degree of popularity hatchback is confronted by very formidable technological rivals, namely: Volkswagen Golf and Skoda Octavia. In Russia, there are very few Spanish hatchback owners at all, and many car enthusiasts choose Subaru or Suzuki.

For testing in real conditions, managed to get a car Toyota Auris in the sports package, the cost of which in the car market of the Russian Federation is about 900 thousand rubles, the minimum price level starts from 877 thousand rubles. The technical side is presented in a very significant way: the 132nd strong atmospheric engine and CVT give the car a sporty character. The power of the engine is 105 horsepower, the maximum acceleration - 192 kilometers per hour, the first hundred is achieved in just 10 seconds. 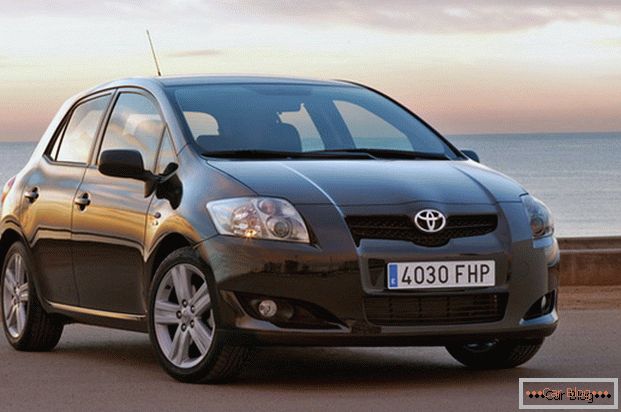 The most affordable option is the base, which is equipped with a six-speed manual gearbox, the nominal engine power is 91 horsepower, and the volume is 1.33 liters. The price of such a hatchback in the automotive market in Russia is 767 thousand rubles. The minimum cost of a car with a gun is 846 thousand rubles. In such a package will also be present a full-fledged package set of security systems, power accessories, multimedia and naturally climate control. Additionally, there is no possibility to order leather upholstery or light alloy wheels, as this equipment is available only to expensive packages, such as Sport or Prestige.

Returning again to the technical aspect of the car, it should be noted that the most optimal equipment for the city costs 917 thousand rubles. It includes not only airbags, as well as electric.

Inside, the Auris saloon has a rather simple interior without any pronounced elements that would immediately catch the eye. The front panel of the cabin is made in a strict style, which is somewhat reminiscent of the times of the 80s, but modern ergonomics and there can be no complaints about it. The dashboard is a classic and all the corresponding control keys are located in the usual place for the motorist. This allows you to instantly get comfortable in the Toyota management process. Sometimes there is a very familiar impression, which appears if the same car has been driven for many years.

The only negative is in the steering landing, which is not objectively performed in the best way. Of course, there is a practical opportunity to adjust the position of the chair in space, but the position of the back itself is far from the optimal option. The back quickly gets tired, because it does not contain a proper amount of reference area. In general, the landing is comfortable, but the situation with the back is similar, even in the rear seats of the car. Although the sofa has a long pillow, and plenty of space for the head and legs.

Seat Leon - the main features of the configuration

The base cost of the Seat Leon is much lower than the Auris. Leon Entry is a basic package, which in the Russian automotive market costs 661,490 rubles. This equipment has a 1.2-liter engine, five-speed gearbox, air conditioning and audio system are missing. A relatively comfortable equipment costs 790 thousand rubles, but the climate control will have to pay an additional 14,400 rubles. Completion Spaniard with a powerful engine often exceeds the mark of 1 million rubles. 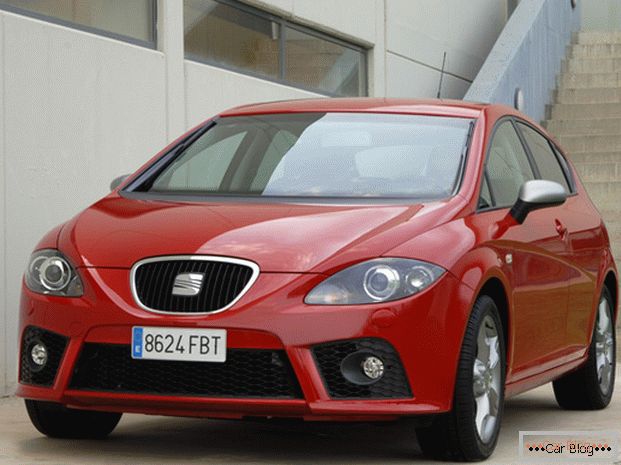 Leon's hatchback has a slightly higher price than the Japanese - 952,890, if you choose a complete set with a full set of options. If we reject all the additional options, then the cost of this car will immediately drop to the mark of 849,390 rubles. For example, the version of the configuration "Style" has a 1.2 turbo engine, climate control, sensor multimedia and heated front passenger and driver's seats. In addition, Leon is equipped with additional high-tech products, namely: a rain sensor, light and pressure level directly in the tires themselves. Not surprisingly, the level of technical equipment and the corresponding price of Japanese and Spanish hatchbacks are practically in the same area.

Although the front panel of the car Seat is made in a classic style, but it does not seem trivial, as it contains a number of special features. The interior of the car Leon does not seem straightforward, as it is made in a concisely simple style. On the sporty character of the car also shows the front dashboard, which was slightly artificially deployed in the direction of the driver. The touch panel of the Spaniard is noticeably inferior to the Japanese counterpart in speed performance.

The lumbar support has a mechanical ability to adjust, plus the landing Leon itself is slightly lower than usual. Although its only disadvantage is not this, but that it has only two modes. In principle, the total amount of the Japanese and the Spaniards have almost similar in size salons.

Of course, at the wheel of the Auris, although there are no vivid sports impressions, the perfect balance on the track, which exists due to the soft suspension, is clearly visible. Therefore, to get the car body out of the state of comfort and balance, you need a sharp road dimple, or opposite the elevation. 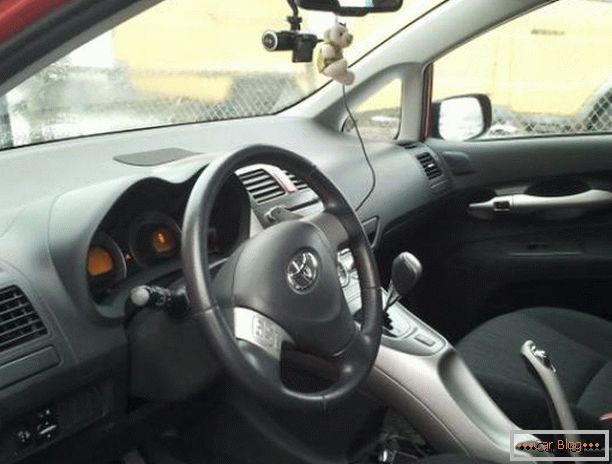 In principle, the Japanese hatchback does not lose its stability even at high speed, however it still reacts to some significant irregularities of the roadway. Factory calibration steering, performed far from best. At the same time, in the test configuration, the steering responds perfectly even at a vehicle speed of 90-100 kilometers per hour. Auris is more prone to drift than Leo, while passing protracted arcs. In addition, the Japanese

adom.ru has a more powerful engine, the volume of which is 1.6 liters. This allows for confident overtaking and necessary maneuvers in the modern conditions of the city. 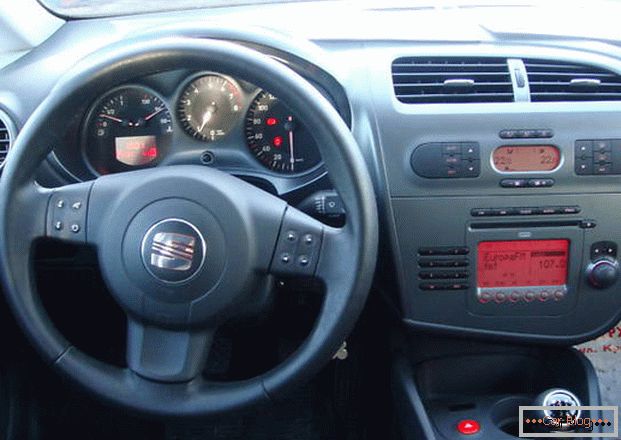 Behind the wheel of a car Seat Leon

Seat has not only lower fuel consumption, but also better behavior on the track. Steering perfectly responds to all requirements of the driver. However, the Leon is a bit harsh and has a slightly lower landing. Toyota on the contrary swallows almost imperceptibly all possible evenness on the track, which is its flawless advantage, and very significant. Objectively, it should be noted that comfort has always been a lot not cheap.

Golf class is a special type of car, which is chosen on the basis of rationality, not a whim, and in this regard, the price is by no means the last value, as sales statistics actually show. However, each car is original in its own way and for many motorists such originality is to their liking. For this reason, they become car owners.

Our test showed that Auris was made according to all norms of the genre, and the Japanese brand in Russia is very strong. Only because of the overpriced price, this car is still not very popular.

As for the Seat Leon, with the transition under the wing of the Volkswagen, the Spaniard's price tag became noticeably nicer. Virtually all warranty and maintenance issues have faded into the background. Although the Spaniard does not yet have the brand power that distinguishes the Japanese, is still ahead.

The result is the following: the comparison presented above objectively shows which of the two car models has the greatest profitability for the acquisition. Leon is cheaper than Toyota Auris, and in terms of comparison, both cars are almost the same. 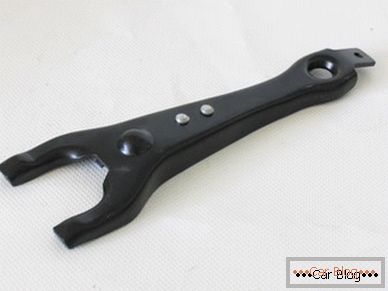