Ranking of the best diesel engines in 2015

The forerunners of the global distribution of diesel engines appeared 30 years ago, when European and Japanese cars began to be equipped with such power units in series. Earlier, attempts to create a passenger diesel vehicle were also undertaken, but the engines for it were most often borrowed from trucks, subjecting them to a slight refinement. Today, diesel engines have gained immense popularity, for example, in Europe, such engines account for 40–80% of sales of various manufacturers. Diesel engines tried not to be delivered to Russia, citing the low quality of fuel and the mentality of people. However, a few years ago, this barrier was overcome and now Russian drivers are also interested in what the best diesel engine can be installed on a car. 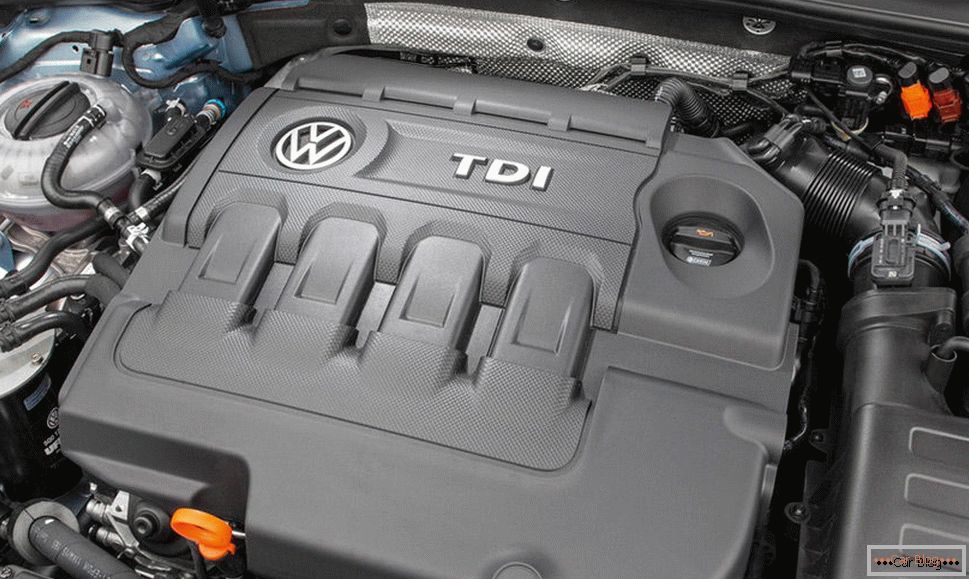 Experiments in the field of improving the efficiency of diesel units have been conducted for a long time. However, the decrease in performance not only reduces fuel consumption, but also significantly impairs vehicle dynamics, making it difficult to manage. Therefore, Volkswagen experts are betting on the "middle ground", which they consider a 1.6 TDI diesel engine. 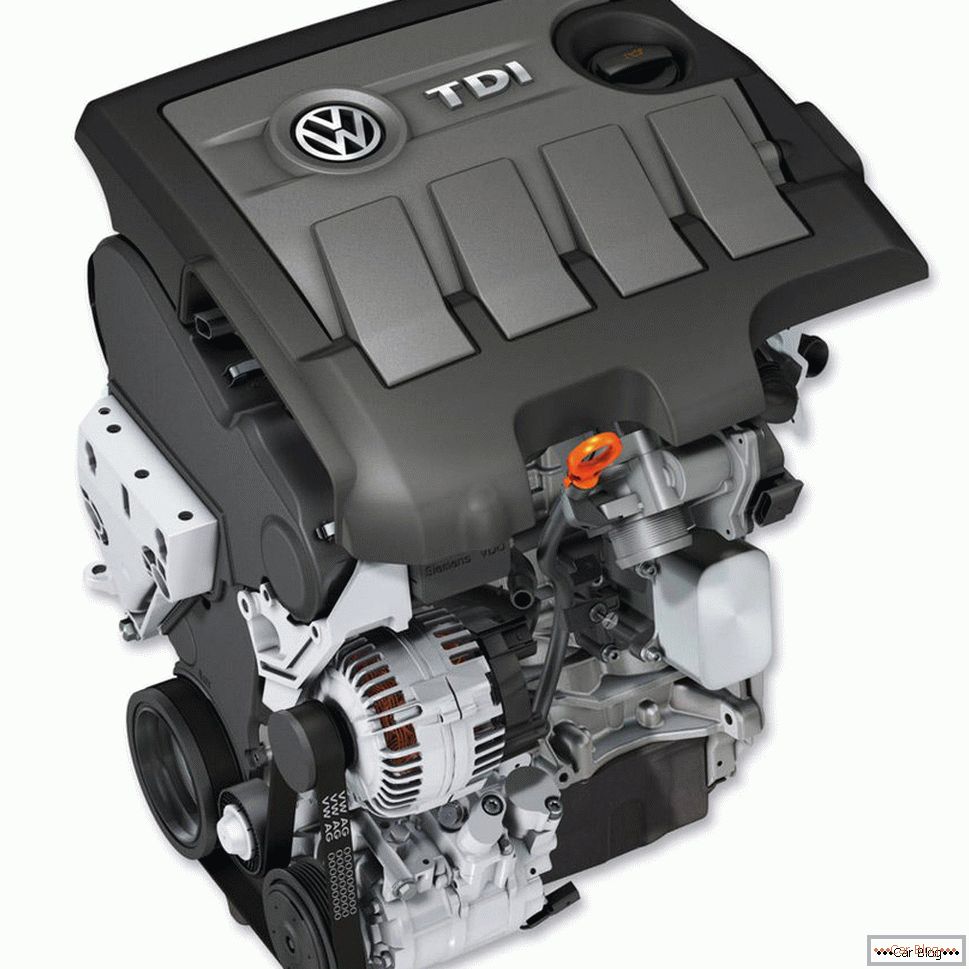 Volkswagen experts have already called such a car the most economical business sedan in the world. Declared fuel consumption is 3.3 liters / 100 km when driving on country roads. British journalist Gavin Conway questioned this figure and decided to test it in practice. Its diesel Passat with a 1.6 liter engine traveled 2,464 kilometers without a single refueling - this corresponds to the route from Moscow to Amsterdam. The final result of the Volkswagen diesel engine was a fuel consumption of 3.14 liters / 100 km. Due to the fact that an independent driver participated in the testing of a diesel sedan, such a record was entered into the Book of Records.

A diesel engine of this size can be installed on other models produced by an international automobile concern. In particular, it is equipped with a Golf hatchback, which shows fuel consumption of 3.5 liters, due to the worst aerodynamics. Such a diesel engine can also be ordered for the Tiguan crossover. The power unit is used and subsidiaries of the company - Skoda, SEAT, Audi.

Not everyone likes the mediocre dynamics of ultra-efficient modern engines. That is why BMW engineers were given the task to create a powerful diesel engine that would consume a moderate amount of fuel. As a basis, they took a modular design, which is inherent in most modern BMW engines. This technical solution allowed to make the power unit more reliable due to the use of repeatedly tested components, and also reduced the cost of cars. 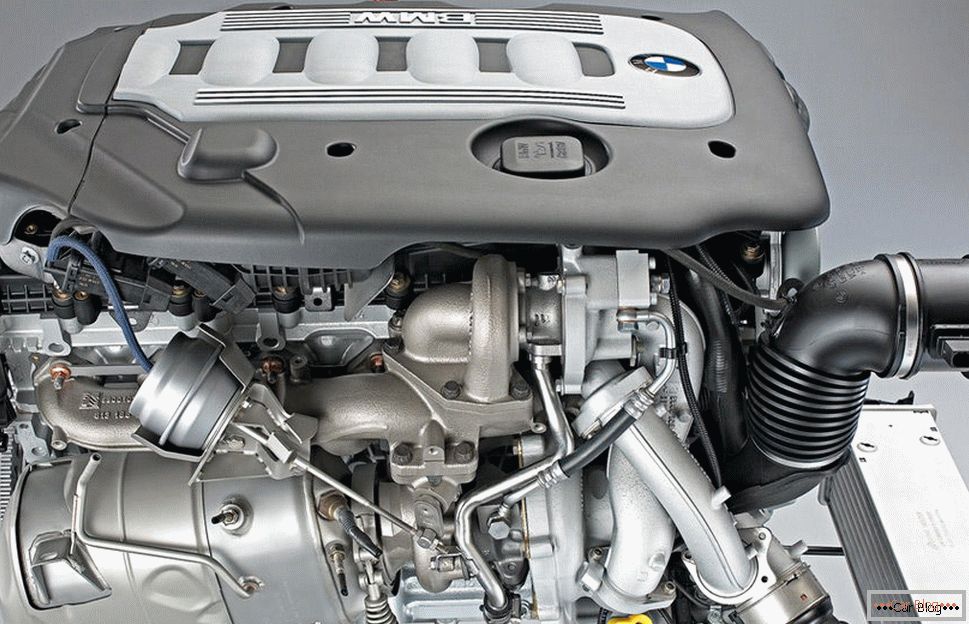 With a volume of 2.0 liters, the diesel engine has a performance of 190 horsepower - this figure is considered incredibly high for this class. The engine is installed on compact crossovers X3 and X1, as well as traditional sedans and BMW coupe - from the first to the fifth series. According to the company's specialists, even the option of using it in the seventh series sedans was considered, but it was abandoned, for reasons of prestige.

Test sedan 320d showed that the average fuel consumption of a similar engine is 5 liters / 100 km. When driving dynamically around the city, this figure can increase to 6-7 liters, which still seems to be a worthy indicator. The diesel power unit accelerates the compact sedan to 230 km / h and contributes to the collection of the first "hundred" in a small 7.5 seconds. When it comes to the X3 diesel crossover, dynamic performance remains almost unchanged, but the average fuel consumption rises by 0.3 liters.

At one time, BMW was faithful to the “atmospheric” concept of engine production - only diesel engines could be equipped with one turbine. However, new requirements for environmental friendliness and economy of vehicles have made adjustments to the company's development strategy. Now, many BMW engines are equipped with 1-2 turbines, which allow for high performance with a small working volume of the unit. A couple of years ago, the company's engineers presented a unique diesel engine, which used three turbines at once. 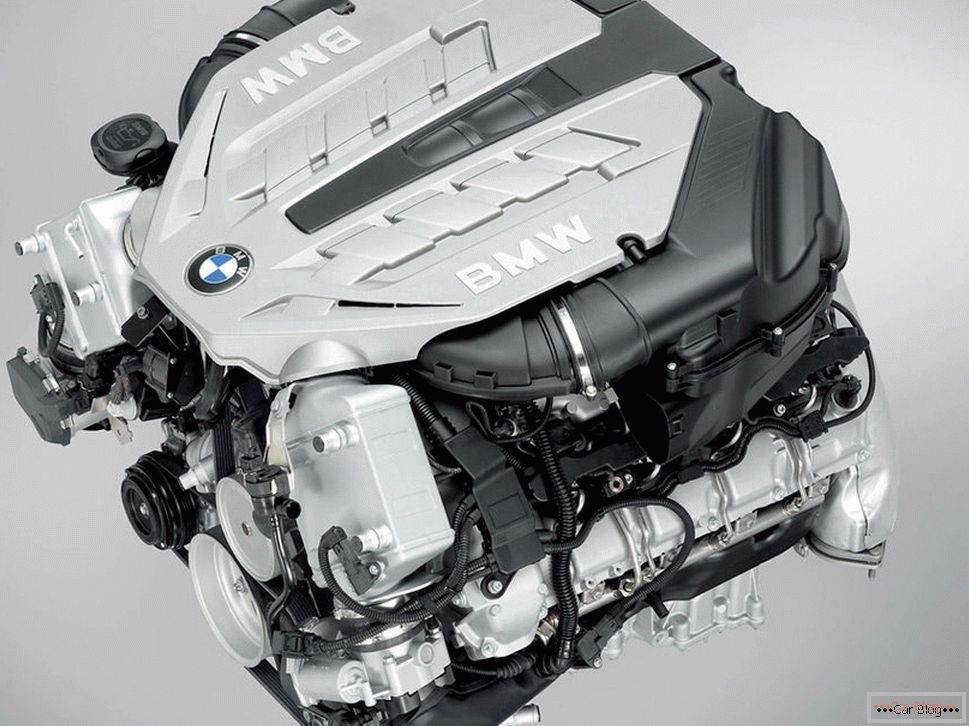 It is also built on the basis of the above-mentioned modular technology, involving the use of 0.5 liter cylinders for diesel engines and gasoline power units. The six-cylinder engine 3.0 has a performance equal to 381 horsepower, which automatically makes it a record for the power density obtained from one cubic centimeter of cylinders. This diesel engine is equipped with fifth and seventh series sedans, as well as full-size X5 and X6 crossovers. For the coupe and BMW 6s luxury cabriolets, you can only order a diesel engine of the same size with two turbines, which yields "only" 313 horsepower.

Dynamic parameters of cars with a similar power unit are amazing. The extended "seven", which weighs more than 2 tons, spends on acceleration to the level of 100 km / h in a little less than 5 seconds. The X6 crossover needs just half a second longer to achieve this. The fuel consumption of a diesel engine varies from 5–6 liters / 100 km with a quiet ride to 12–15 with the gas pedal pressed “to the floor”. The latter figure seems too big for a modern diesel, but it is worth remembering that gasoline vehicles with similar dynamics consume at least 20 liters / 100 km. Next year, the rating of the most powerful diesel engines will be updated, as BMW engineers are already preparing an engine with four turbines - various sources call it a power within 390-406 horsepower and torque up to 800 Nm.

As you know, Americans were the last to surrender under the onslaught of modern diesel engines - even now, many light trucks in the United States are equipped with powerful gasoline units. Ford tried to get out of the situation by creating a high-performance turbocharged engine, but the Chrysler concern decided to give preference to a high-performance diesel engine. The three-liter newest power unit was awarded the title of the diesel engine of the year according to the North American version, which brought him great popularity among buyers of Dodge Ram pickups. 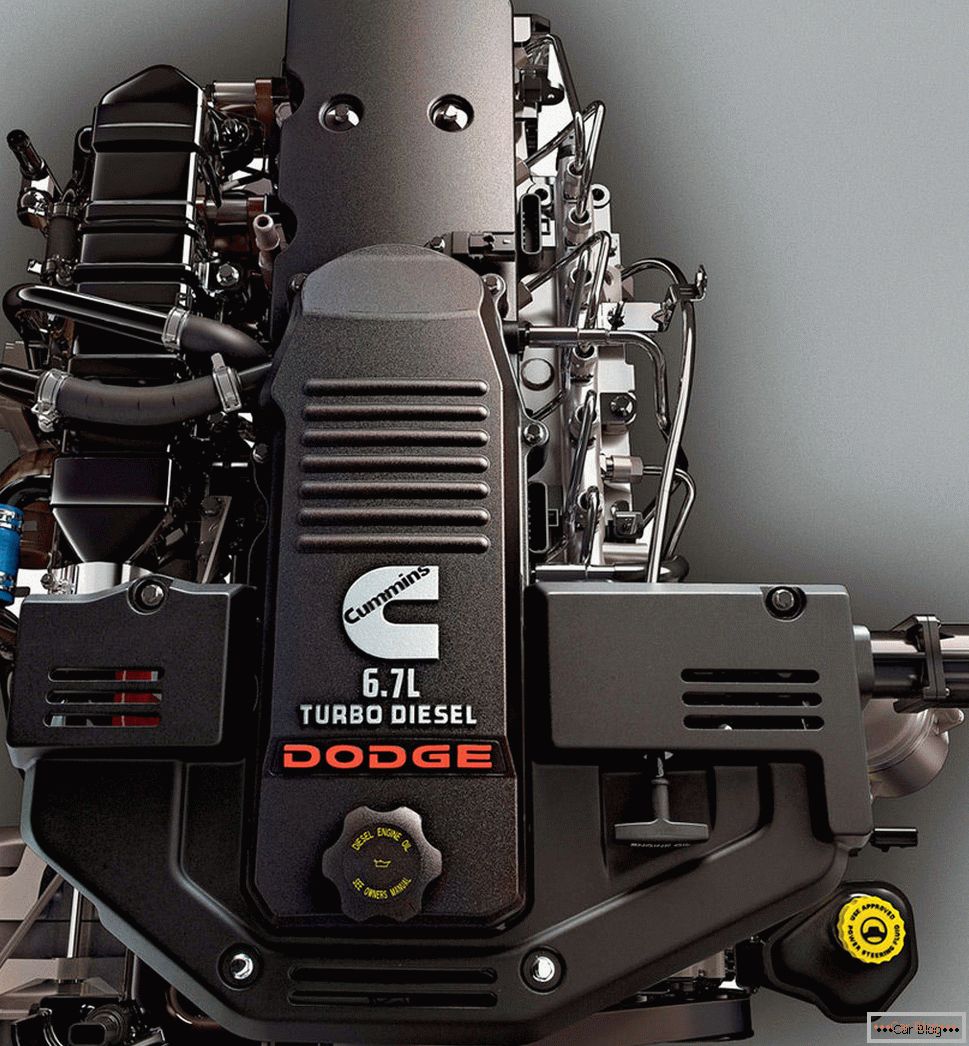 However, the engine can not be called purely American, because its homeland is ... Italy. Diesel engine developed by FIAT, which installs it on the prestigious Maserati Ghibli sedan. It was rumored that the first diesel Ferrari could get such an engine, but the project was closed due to the possible damage to the reputation of the sports car manufacturer.

The dynamic characteristics of the power unit are good enough - the power is 240 horsepower, and in the version for the Maserati - 275 liters. with. The average fuel consumption of a pickup truck is 8.5 liters / 100 km, which is 30% less than its main competitors. Such parameters of the diesel engine are achieved through the use of high technology:

The advantage of a diesel engine is also called its exceptional environmental safety. The particulate filter is manufactured using plasma cleaning technology, and the fuel system is adapted to the use of organic biodiesel.

Car manufacturers from Korea have never relied on high-tech diesel engines - they tried to improve petrol units, reducing fuel costs while increasing productivity. However, for a mass entry into the European market, Hyundai needed a modern engine that uses heavy fuel. The unit, developed by the engineers of the concern, received a volume of 1.7 liters, which corresponds to a power of 110–136 horsepower. Despite the apparent lack of performance, this engine has a very high torque, which allows cars to achieve the same dynamics as with petrol engines of 150-170 horsepower. The first vehicle to receive the latest diesel engine was the i40 sedan, designed specifically for European customers. The car turned out to be very balanced - its maximum speed reaches 220 km / h, and acceleration to the "hundred" takes about 10 seconds. Fuel costs are in line with business class averages - a diesel sedan needs 5.5 liters of fuel per 100 kilometers.

Hyundai installs this diesel engine on the ix35 crossover. There are also plans to use a compact powertrain in the large Sonata and Grandeur sedans — it is assumed that large corporate fleets will become users of such modifications. Younger models of the company received other engines that have a capacity of 90–126 horsepower with a working volume of 1.4–1.6 liters.

The battle for the title of the most economical engine of our time was announced by Toyota, which released the compact all-wheel drive Urban Cruiser. It is equipped with a 1.4 diesel engine with a power of 90 horsepower. Despite the constant drive of both axles and the need to rotate the all-wheel drive coupling, this diesel engine consumes about 4.5 liters / 100 km. Even urban conditions are not able to significantly increase his "appetite" - the maximum figure is 5.5-6 liters. In response, the Volkswagen concern showed an ultra-economical hatchback SEAT Ibiza Ecomotive. Its engine has a similar working volume, but instead of four cylinders it is content with three. Power is only 75 horsepower - but this is enough to accelerate a compact car to a level of 175 km / h. The average cost of fuel is 3.1 liters / 100 km, which makes it possible to call the car the most economical commercially available. However, you need to understand that efficiency is achieved not only due to the unique diesel engine, but also due to such components as the grille plug or special tires.

To say exactly which diesel engine is better is impossible. Companies purposely avoid the use of these power units on cars comparable in other parameters. Therefore, Toyota received the title of the most economical crossover, while Volkswagen ranks first among minicars.

Modern diesel engines are gradually displacing gasoline units from the market, capturing an increasing share of car sales. However, several problems hinder the transition to diesel fuel to the automotive community:

Therefore, in the near future to wait for the complete disappearance of gasoline engines should not, although they have already begun to give up their positions to powerful economical diesel engines. 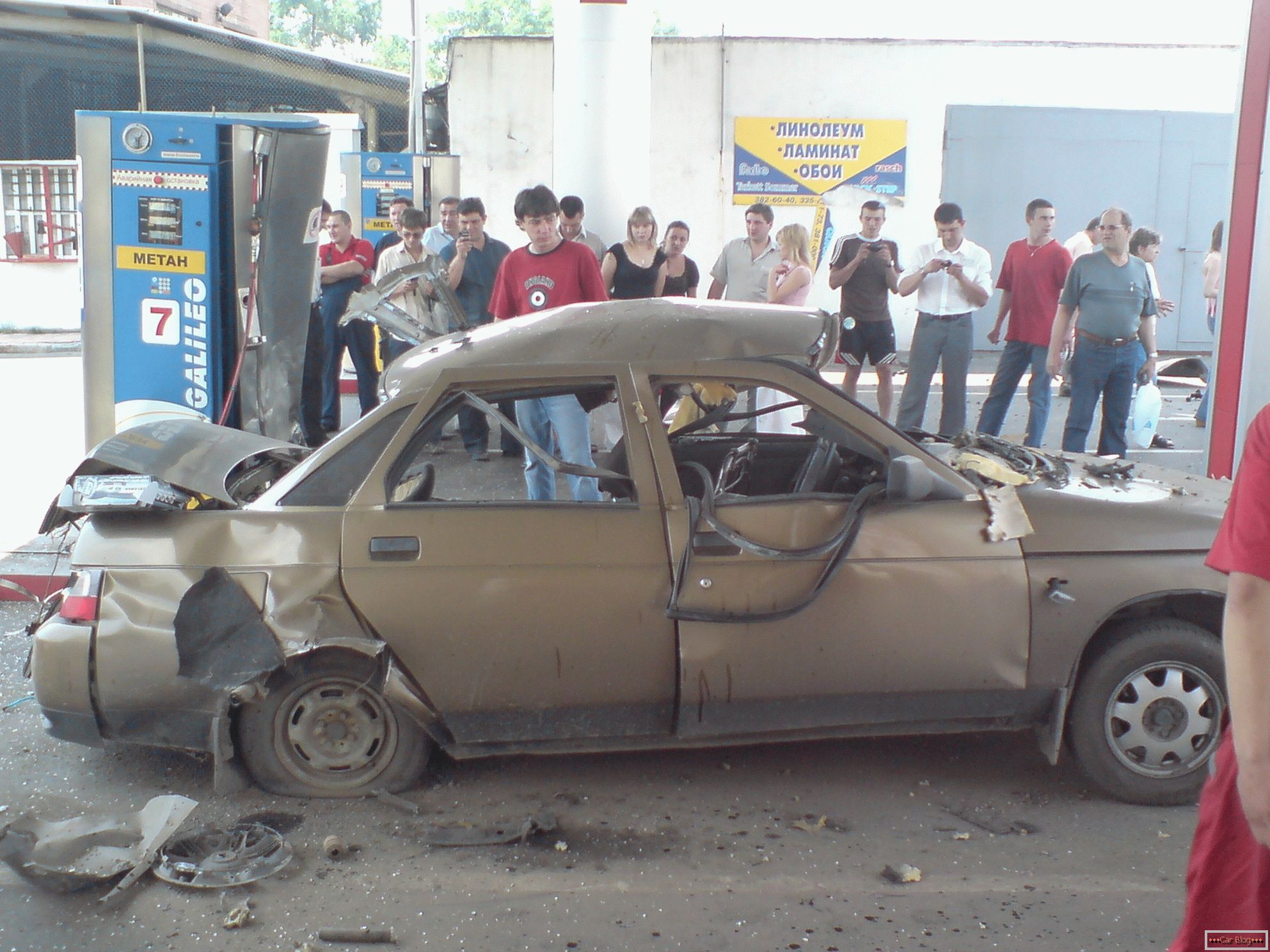 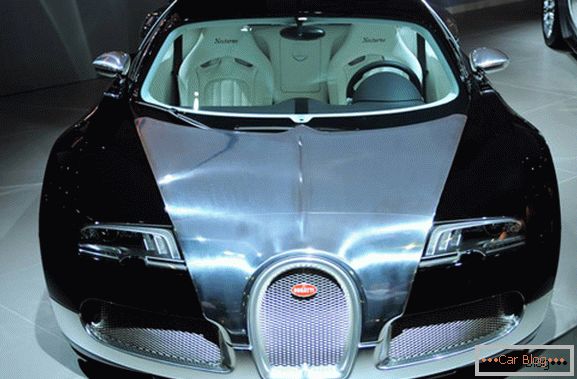 What kind of sealants for automotive headlights are