Mercedes-Benz G-class - luxury car. This is the most expensive serial SUV of all that you can buy in our country. The famous "Cube" is a welcome acquisition of many businessmen who want to demonstrate their high position with the help of a car. Buying Gelandewagen is usually devoid of rational motivation. After all, this car does not economically consume fuel, jumps along the road, besides, the car is deprived of the drive that is inherent in real sports models of Mercedes. 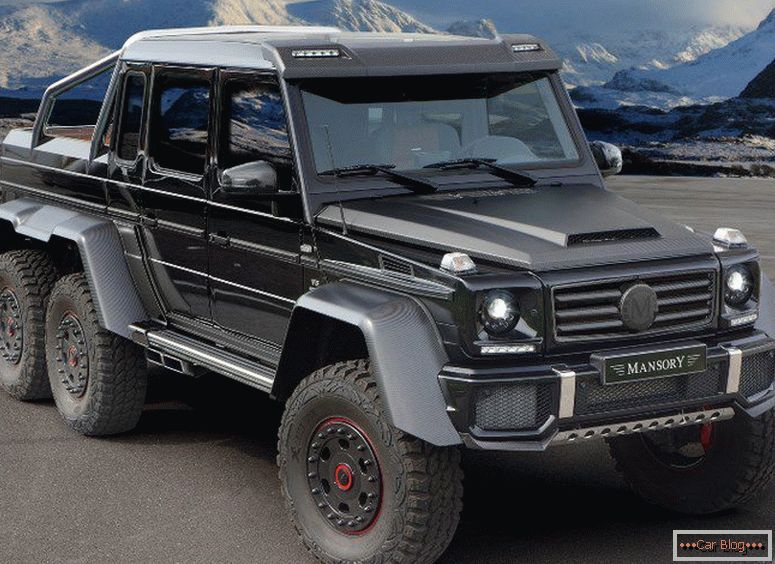 However, the appearance of "Gelika" attracts many. Now Mercedes Gelendvagen can not be called an exclusive car, because every year more and more people can afford such a car. You can achieve exclusivity by making Gelendvagen tuning, taking into account the latest fashion trends. We have selected for you the most vivid examples of tuning the Mercedes "Gelika", made by well-known tuning specialists. We present them to your attention.

Masters from German Special Customs offered the owners of the "Cube" a full set of options to fulfill any desires. In experimental Gelandewagen, they reconfigured the motor control unit and added their own customized release, which made it possible for the bright G-class member to become more playful. The arrow of the speedometer after the transformation over the system can point even in the direction of the mark in 320.

The body design package includes installing wide bumpers, replacing the Mercedes badge with a new one - traditionally, in the middle of the grille, expanding wheel arches (they became even more angular), inserting LEDs into the bumper under the headlights, inlaying the hood and wings with carbon fiber parts as well as coating side mirrors with carbon fiber. The customized release at the end has two rectangular tubes in front of the rear wheels.

Rims with a diameter of 23 inches, the company German Special Customs has developed and manufactured specifically for tuning this car. The salon got a beautiful leather trim, and some interior parts covered with carbon fiber. After the fruitful work of GSC specialists, the Kubika engine gained more than 615 horsepower. Due to the bright color of the Gelandewagen body, the car no longer resembles a brutal vehicle of the time of the end of the last century.

For the company Mercedes-Benz Gelendvagen is a true SUV, with its inherent impressive technical capabilities. The price of the "Cube" is so high that any buyer wants not only to have a powerful mechanism, but also to feel comfortable driving at the wheel of a giant of design ideas. The authors of tuning took into account all the wishes.

Recommended article: Tuning a VAZ 2108 (eight tuning) with your own hands is easier than ever.

The loading platform received bamboo as a finishing material. The interior was trimmed with designo leather, and the colors chosen were bright - a combination of red and light brown. There are four separate seats in the cabin, they were “pumped” by the heating system, electric adjustment of the position and ventilation. As a result, the car turned out to be the most exclusive and unique, to the envy of competitors. But the price of such a car is almost three times the cost of the Gelendwagen base set.

The authors of the project during his presentation said that they had transformed the 6-wheel SUV from Mercedes-Benz with the help of an exclusive interior trim, a forced engine and additional body elements. Changes that occurred with the engine, the car went to the benefit. After careful adjustment of the control unit, we managed to remove an extra hundred horsepower, which was good for the 4-ton car. 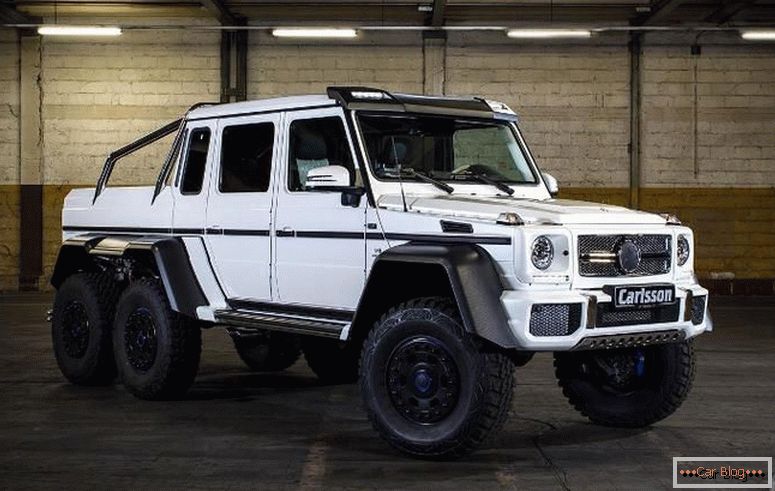 As for the cabin, its finish is flawless even in the basic configuration, so the innovations from Carlsson can be characterized by the well-known phrase “the best enemy of the good.” But only because of the high cost of materials. Externally, the outrovel did not change drastically; rather, the changes can be called light strokes. As seen on photo Gelendvagen (tuning), steel wheels and grille, which now adorn the logo of the company that made the tuning.

Of all the improvements that were made by the master Carlsson, the most valuable should be considered a system for increasing the power of the Performance Kit engine, which added 106 horsepower. This change is really important for such a large car. 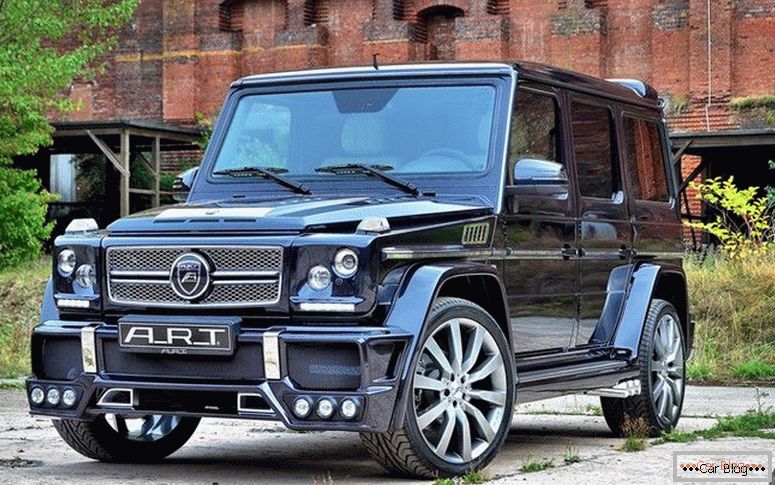 The main task of the tuning masters was the expansion of the Gelendvagen body. To this end, experts have equipped the "Cube" of impressive size with a front bumper with an integrated spoiler, and an LED backlight has been built into the steps from all sides. The wheel arches became even more protruding on the sides, and in the rear bumper they harmoniously integrated reversing lights and fog lamps, which were hidden behind the bars of protective grilles.

In addition, Gelendvagen equipped with LED rear optics and xenon lamps in the headlights. The wheels were forged items - ART-designed. The exhaust system was configured to work more clearly, for this purpose it was equipped with six exhaust pipes. They are made of stainless steel and are located on the side - three on each side in front of the rear wheels. Salon has not changed dramatically. Every inch of the cabin trimmed with genuine high-quality leather.

On the headrests of the front seats appeared touch monitors to control the multimedia system. To improve the technical characteristics of the car, ART specialists decided to work on engine power by re-calibrating the engine. They also worked on the engine cooling system. As a result, thanks to ART, the car received a non-trivial appearance, the highlight of which was the wide body panels. Changes under the hood allowed to increase the power of the "Cube" to 750 horsepower. 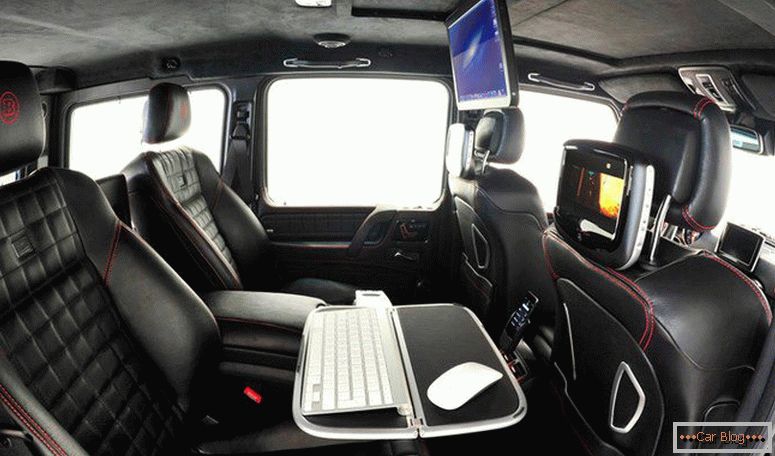 Vrabus experts decided to use an extraordinary approach to tuning. The rest of the experts focused on external changes to the car, or at least - on the modernization of the engine. And the masters of Brabus not only taught the engine of a G-class car to squeeze 800 horsepower. They modernized the multimedia capabilities of an SUV, turning it into an office on wheels.

Gelendvagen literally stuffed with modern gadgets. Mercedes got a brand new Mac Mini, which, in combination with the Apple TV module, allowed the car owner to do business without leaving the Cube. Mercedes Gelendvagen tuning also assumed the presence in the car of a small refrigerator for drinks. All multimedia gadgets, among which was a docking station with built-in batteries for recharging Apple gadgets, as well as a niche for convenient storage of a portable keyboard from the Mac Mini.

The 15-inch monitor, with which you can view information, is located on the ceiling of the car. The screen rotates, leans back and can be completely hidden. In order to have Internet access, a Mercedes has been equipped with a high-speed modem that supports wireless LAN. In addition to "multimedia" innovations, Brabus experts decorated the Gelendvagen body with wide arches, where the wheels were placed 23 inches compactly and Bilstein shock absorbers, which were adjustable.

The interior is completely finished with high-quality leather with Alcantara elements. As a result, the car became like a Jeims Bond vehicle: stylish, modern, powerful, technically advanced. 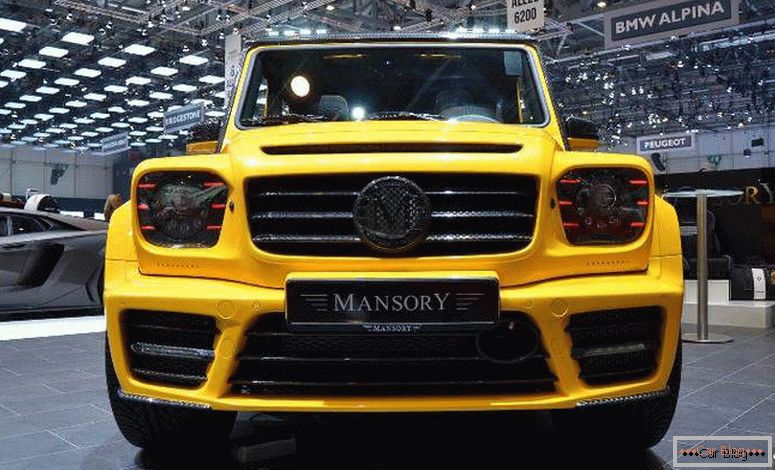 The first thing that the Mansory Gronos specialists did was to increase the power of the Gelendvagen to 814 horsepower (initially it was 544 horsepower). Mansory essentially replaced the base engine. From the former there was only the cylinder block, but the cylinder head, pistons, crankshafts, connecting rods and other components. Tuners engaged in the installation of a new exhaust system, which ends with pipes located traditionally in front of the rear wheels.

Appearance showings added a hood with large air intakes, a large convex grille, updated bumpers, Dutch Vredestein tires, combined with 23-inch wheels. Like other tuners, Mansory Gronos expanded wheel arches and equipped the cars with advanced xenon. Salon Gelendvagen modernized with inserts of leather and carbon. In addition to the new steering, nothing essentially changed. In general, the car has not changed dramatically, the only merit of tuning specialists is a record engine power. 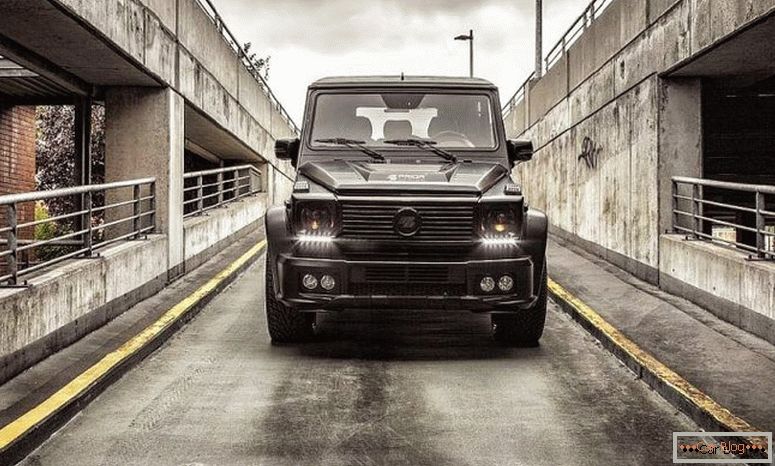 The guys from Prior Design, who undertook the modernization of Gelendvagen decided to make a bid for external changes. The tuners offered to refine the exterior design of the G-class car with the help of interesting bumpers with built-in optics, classic four-wing extenders, as well as a stunning hood with multiple slots.

The tuning package includes the installation of 23-inch wheels, LED headlights and front protivotumanok, as well as the exhaust system. As a result, the masters of tuning turned out to be an ordinary Gelendvagen, only more impudent in appearance, according to Mercedes Gelendvagen tuning photos. Not everyone is willing to pay for only visual transformations that do not imply an increase in the power of the car. 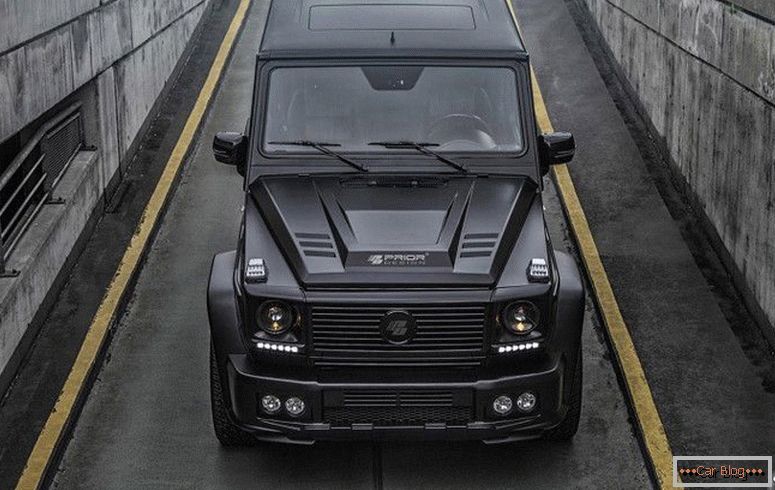 Vorsteiner is one of the most famous German tuning workshops. They are mainly engaged in the tuning of German cars, they also have a division that is engaged in the transformation of exclusive brands. However, even a good reputation and a large staff of professional tuners, usually the masters work on cars superficially. For example, for Mercedes Gelendvagen they prepared updated rims. The list ends here.

Of course, the wheels are impressive: black, 22-inch, matte, black, equipped with tires from Pirelli Scorpion. Someone will say that this is nothing. Others will argue, arguing that beautiful high-quality wheels are half the success of a car. Which side to take is up to you. But if you want to change something in the car at no extra cost, or perhaps make the changes not too catchy, this option is fine.

By the way, about tuning Gelendvagen there is even a whole release in the program "Tuning Atelier". In this video, a lot about how to customize the SUV to your preferences: 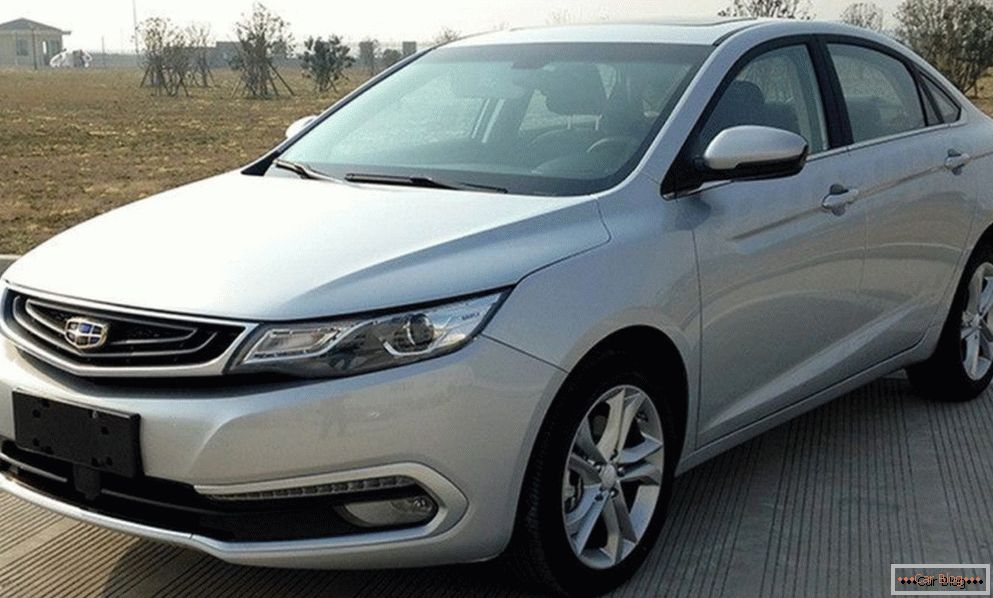 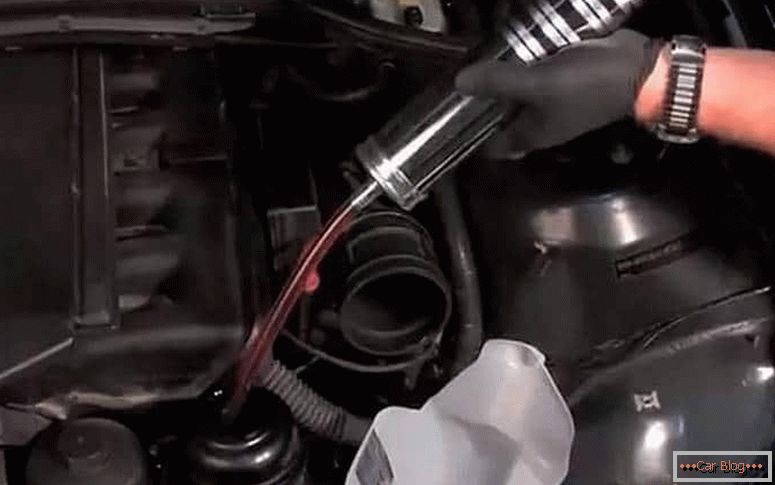 Replacing fluid gur do it yourself 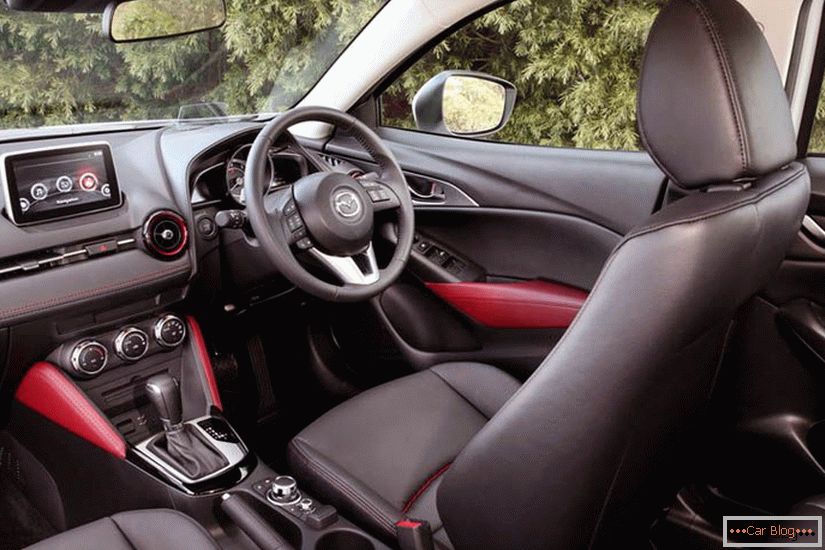