Today, crossovers are of particular interest to the public, because these cars have off-road qualities and drive around the city well, because they have compact dimensions. If we study the statistics of sales in recent years, it is clear that consumer interest is gradually shifting to the sector of crossovers and compact SUVs. Such a movement of buyers has been noticed on the market in European countries, as well as on the Russian market.

VAZ does not lag behind the new trends.

VAZ and its marketers realized that crossovers are the future of the automotive industry. Therefore, most recently at the exhibition in the Moscow Motor Show were presented cars with the prefix «Cross» - Lada Kalina Cross and Lada Largus Cross. Judging by the name of these cars, it is clear that these cars should have serious off-road qualities, as compared to ordinary passenger cars.

Model Lada Largus turned into a crossover is not accidental, the whole point is that this model had good sales figures, that is, this car is quite popular in the market. In Russia, Lada Largus is considered the leader in sales among generalists.

This car has become so popular due to serious advertising in automotive magazines and on the Internet. Everywhere the advantages of the modified Renault Logan wagon were mentioned, all the details were described in detail before the appearance of the Lada Largus in production.

After the appearance of Lada Largus, it became obvious that this car is indeed one of the most successful products of AvtoVAZ. In Largus, the body is arranged so that the car turned out to be quite spacious. As for the design of the car, then it is all exactly the same as the French counterpart - Renault Logan. The success of this car is due to the fact that the VAZ has launched a car whose reliability is similar to that of a foreign car, and price Lada Largus Cross corresponds to the Russian car.

On this successful note, AvtoVAZ management decided to give Largus the status of a crossover in order to increase public interest in this model and increase sales.

The presentation of the Lada Largus Cross was quite loud, a lot of good was said about this car, but after a test drive the audience was a little disappointed and there are many reasons for this. 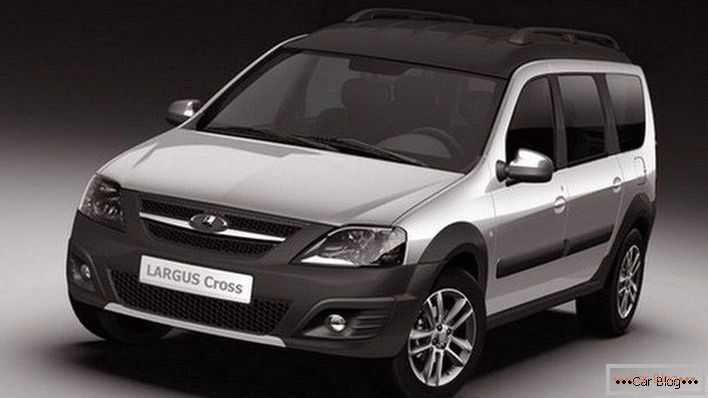 It was found that all the improvements on the body - is the appearance of black plastic lining, which are installed on the bumpers, and the same plastic wheel arches and sills. And this plastic can not give the car off-road potential. Of all body upgrades, the increased clearance of the Lada Largus, which has now become 170 mm, is considered the most significant. The suspension is also slightly modified, it has become adapted for off-road driving. But a serious off-road is too tough for this car, but for a trip to the country - the very thing.

Recommended article: Japanese automaker announced the timing of the debut of the "three-row" Mazda CX-5

The appearance is decorated with new regular 16-inch alloy wheels with oversized tires. It is worth noting that AvtoVAZ developers called the used plastic elements “aggressive design”. This is their subjective opinion, because what exactly aggression is not clear, and the developers have not explained anything, plastic as plastic, especially since it does not possess any special properties.

And in general, Lada Largus Cross (фото further) is very similar to the Franco-Romanian Dacia Logan MCV 2006, the only difference is that the Lada Largus Cross has a different grille and bumper. The body shape is rather angular, and the large rear part of the car, where vertical pillars and tailgates are located, makes this car very much like a minibus, which is good enough for commercial purposes - for example, to transport potatoes. 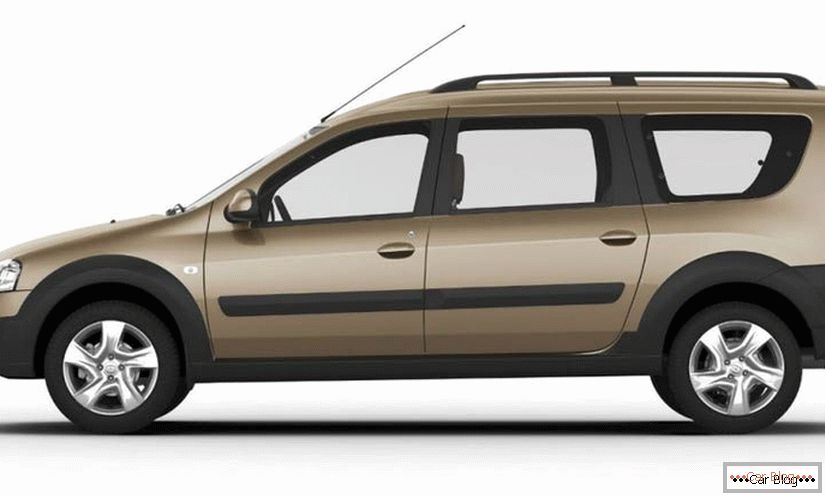 Also, this car has a fairly simple head optics, flat roof, in which there is nothing special either. Mirrors and door handles also do not differ in any originality. Therefore, looking at all these details, it becomes clear that the Lada Largus is not a particularly elegant car. But there is nothing bad in it, because elegance is not at all necessary for an SUV.

You can even remember the Gelendvagen, there, too, everything is not so elegant, but off-road qualities are excellent. So in the Lada Largus Cross there is this rudeness, so it can even be considered an advantage, after all this is also an off-road model. There are still noticeable gaps between the wings and the bonnet, and they are quite large, and this does not look aesthetically pleasing.

When you drive a Lada Largus Cross, if you drive in a regular Largus before, you will immediately notice that there has been no significant change in the cabin. Driver's seat is quite comfortable and reliable, it can withstand a person of almost any physique.

What else is good in the cabin is that in this car there is an adjustable lumbar support in the driver's seat and vertical adjustment of the steering wheel, which is also very convenient, you can adjust the seat and steering wheel purely by yourself. Also in Lada Largus Cross there is a rather high landing, so this car has good visibility, despite the pillar. As for the front panel, it remained in the classical form for Largus. 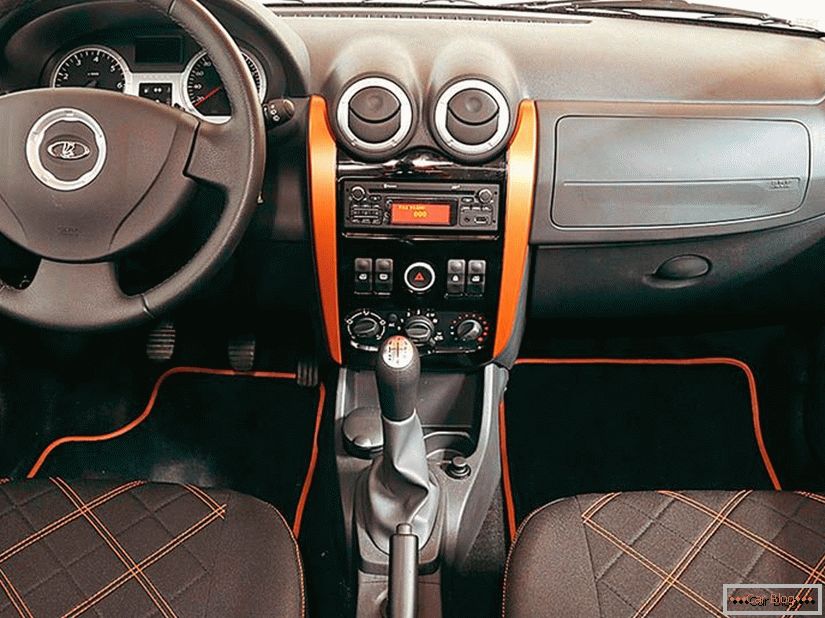 In the interior design off-road version of the Cross, there are some features, such as orange leather inserts, which are decorated with the front seats. The line and the cell on the seats are made in the same color, they are a kind of decoration for all the seats. In addition, orange leather inserts are used on the center console and on the doors. Such a design move allowed to diversify the Largus salon, without any significant costs.

The Largus Cross Salon version is quite spacious, 7 people can easily fit in it, it was the AVTOVAZ that worked seriously on the spaciousness, so there is enough room for height and width. On the second row, 3 people can easily fit, while they will not interfere with each other, and their legs will not even touch the front seats. It is possible to install additional seats in the third row, this will allow to create another 2 seats for passengers of absolutely any configuration. Since the seats in the 3rd row are located above the rear axle, passengers will experience all the irregularities of the road on themselves, they will shake a little.

Like almost any car, Largus Cross can easily be transformed into a very roomy truck, turning the rear seats, after this metamorphosis the 200-liter trunk will turn into a huge 2500-liter trunk, in which you can put a lot of cargo. The salon is transformed quite easily and quickly, in addition, it is convenient to carry out loading and unloading in this car thanks to the doors with latches. 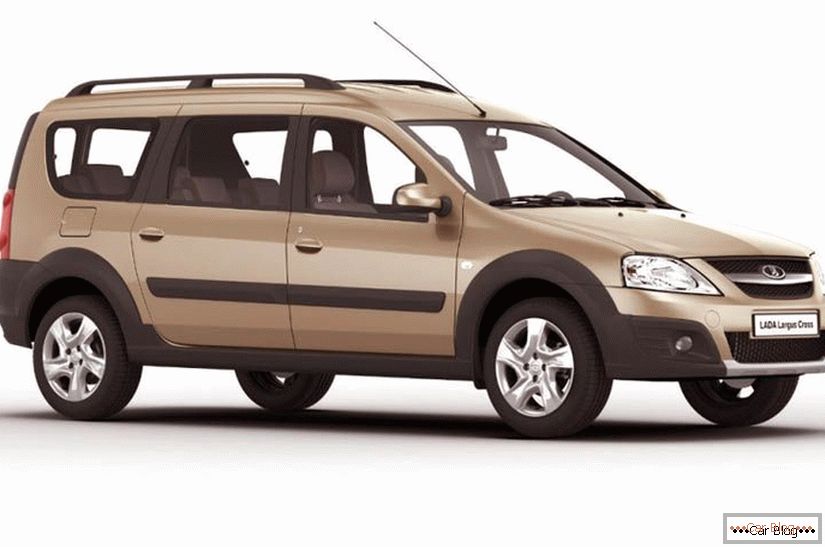 Lada Largus Cross is equipped with a 4-cylinder engine running on gasoline, its volume is 1.6 liters. The power of this engine is 105 horses, at 3750 rpm. The torque of this car is 148 Nm and is achieved at the same speed.

With this engine in tandem works manual 5-speed gearbox. The car can accelerate to 165 km / h, and the first 100 km / h the car dials in 13 seconds. Not very fast dynamic performance, and fuel consumption is also not low enough and is 12 liters per 100 km of run in the city, on the highway consumption is 7.5 liters per hundred.

But if you compare the Lada Largus Cross with a conventional wagon, it is clear that the suspension has been slightly improved, and the shock absorbers have been reset, the clearance has increased by 25 mm. In addition, in the off-road version of Largus installed special springs, silent blocks and support struts. According to the engineers of VAZ, this car became better in driving, and the brakes improved. As a whole, the shock absorbers themselves underwent retuning. According to AvtoVAZ engineers, the novelty received revised steering systems and brakes. Lada Largus Cross Features correspond to the new Russian car.

As shown, riding on this car is consistent with the promises of developers. The Lada Largus Cross suspension now has enhanced elasticity, even when it falls into deep holes, the car behaves quite calmly. But on the other hand, thanks to this rigidity, if the car is not loaded with people or with cargo, then the driver’s comfort will decrease a little, it will be a bit harsh to drive along the harsh Russian roads.

Recommended article: Tuning engine VAZ 2109 on their own 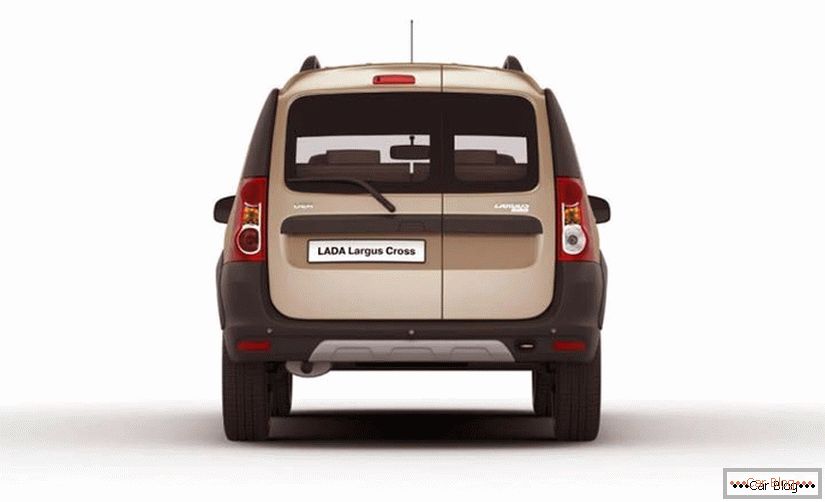 The wheel turns quite well, the car is distinguished by responsiveness to any movements of the wheel, and Largus Cross can very clearly respond to driving actions, the car is able to keep the road very smooth, so if you want, you can drive on rails and not be afraid to accelerate to a maximum 165 km / h

Turns the car will not be able to overcome at high speed because of its center of gravity. But since this car is not designed for racing and pokatushek, but for business, transportation of goods and people, it is not necessary for him to enter turns at high speed.

Due to the high ground clearance, plastic bumpers, the driver can now feel more confident and easily jump onto the edge if necessary. As for trips to the cottage, fishing or into the forest, you can not be afraid of holes and other irregularities, the ground clearance allows you to feel confident in the countryside.

As for the real off-road, here Largus has few chances, so it’s better not to move out of the dirt road, but in general you have to look at the situation, it happens that in the swamps, even serious SUVs get stuck.

That's when VAZ will decide to produce these cars with all-wheel drive, then maybe Lada Largus Cross will be able to show something off-road, but for now this is just an urban crossover. 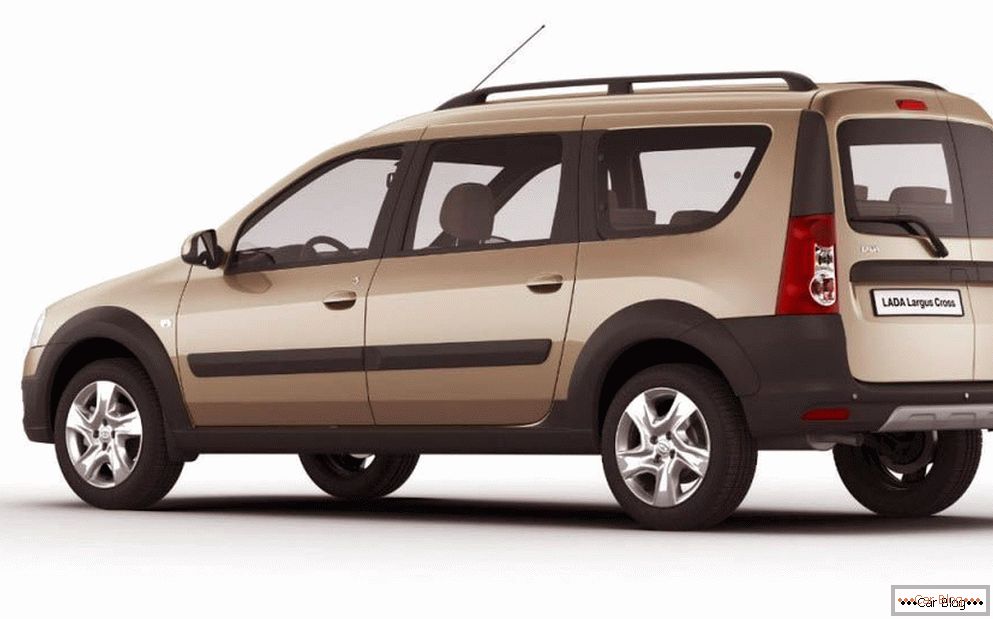 Advantages and disadvantages of Largus Cross

The main advantages of this car are the spaciousness of the cabin, practicality, maneuverability, a double tailgate, robust construction, high ground clearance, plastic body kits.

Among the shortcomings - there are no different engines to choose from. Little engine power, if the car is seriously loaded, then 105 horsepower will be lacking for a confident ride. Among the other disadvantages - the reserve is quite uncomfortable - under the bottom, you can easily get it, but putting a spare tire in place will be quite difficult, you will have to get dirty. As for the exterior mirrors, they are rather inconvenient, visibility is not very good when driving in reverse.

Next, a video about Lada Largus Cross from the exhibition, where she was presented: 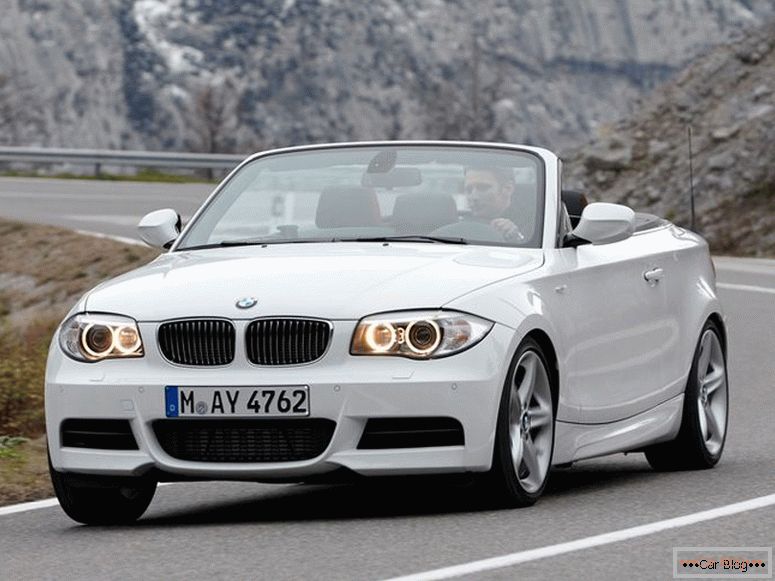 Bmw 1 series in the secondary market: is it worth buying? 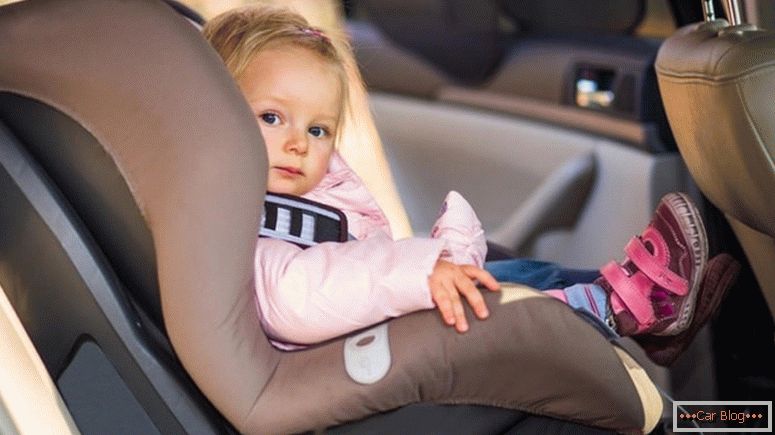 How to choose a baby car seat 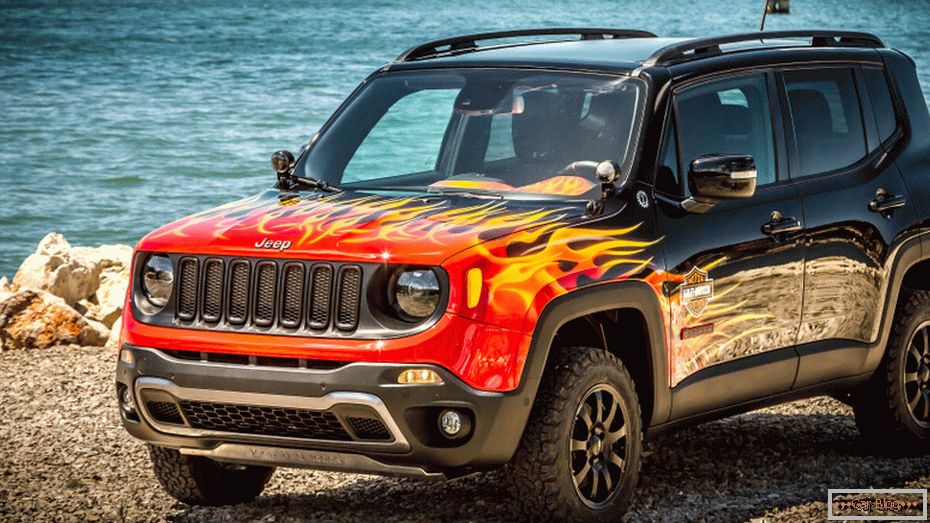