In 2002, the Mazda 626 was replaced by a new generation under the symbol 6. For three years, several cars followed the sedan, forming a whole line. Among these models you can find the Mazda RX-8 sports car, the Mazda 5 family minivan and two city cars with indexes 5 and 3. The third version is the most remarkable - it is in many ways similar to the predecessor Mazda 6 and drivers often choose it. To find out whether it is suitable for one or another car enthusiast, it is necessary to compare cars in detail.

The car is a follower of the famous Mazda 626 series. Changing the index indicates a serious update in both image and technical features. Mazda 6 is significantly different from its predecessor - the company managed to radically change the image of the car. The sixth model is produced since 2002 and quickly became widespread.

Now the Mazda 6 is presented to the driver in the third generation and the second restyling, which took place in 2015. The model is still relevant for its time, combining excellent value for money with safety. From the dorestaylingovoy version of the Mazda 6 differs in an improved design of the exterior and interior, a modified platform and wider functionality. 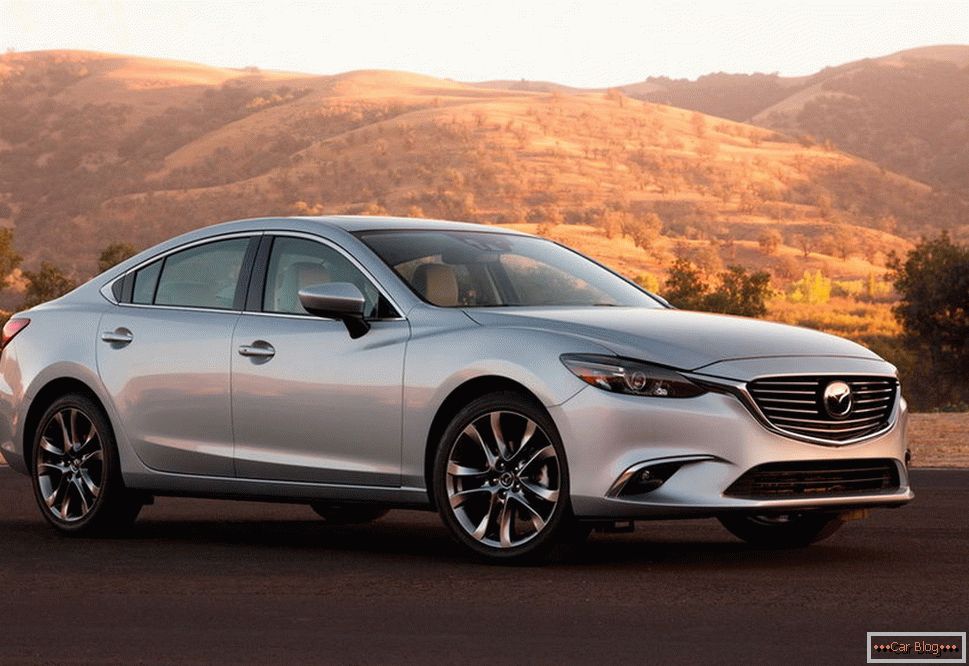 This car was introduced in 2004. From its predecessor - the Mazda 6 - differs, first of all, in lower cost. Other qualities follow from this - smaller dimensions, power and functionality.

Now the third generation appeared in 2013. Compared with the first version of the car has become more modern, both in appearance and from the technical side. 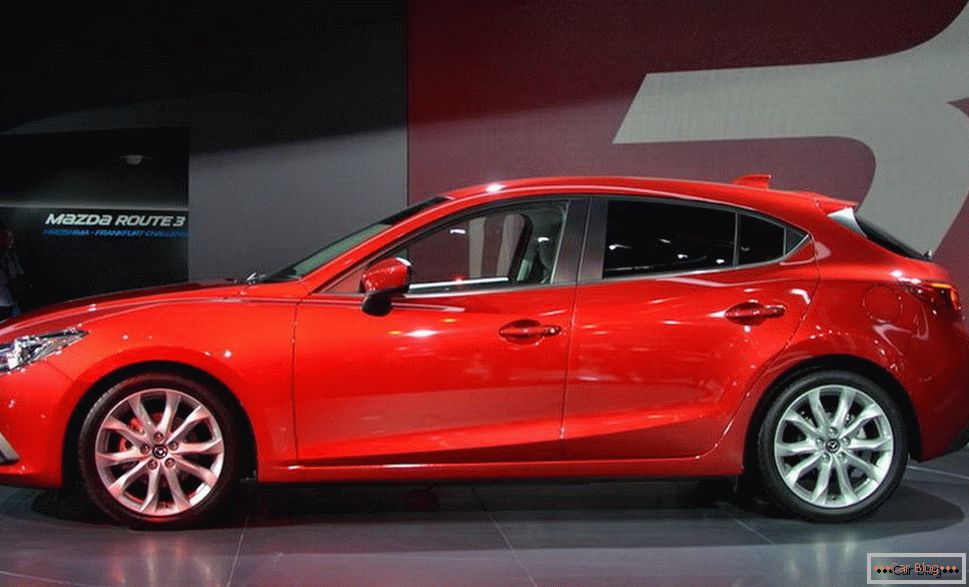 Mazda 6 and 3 belong to the same class of vehicles and have a similar body design - so much so that they are easy to confuse. However, there are a number of significant differences. So, the Mazda 6 is a more premium car with good road and functional equipment and a corresponding price. Mazda 3 can be called a more modest follower of the sixth version - it has more budgetary characteristics and a price tag than attracts motorists who want to save a little.

Mazda 6 is available in three variations of the body: sedan, hatchback and wagon with a sporty bias (according to the manufacturer). The hatchback is the most versatile option - relatively compact, it has the greatest practicality in urban environments. The station wagon is perfect for family needs, and its “sportiness” is that the car is equipped with the same engines as the other variations, which allows it not to be inferior in its characteristics. 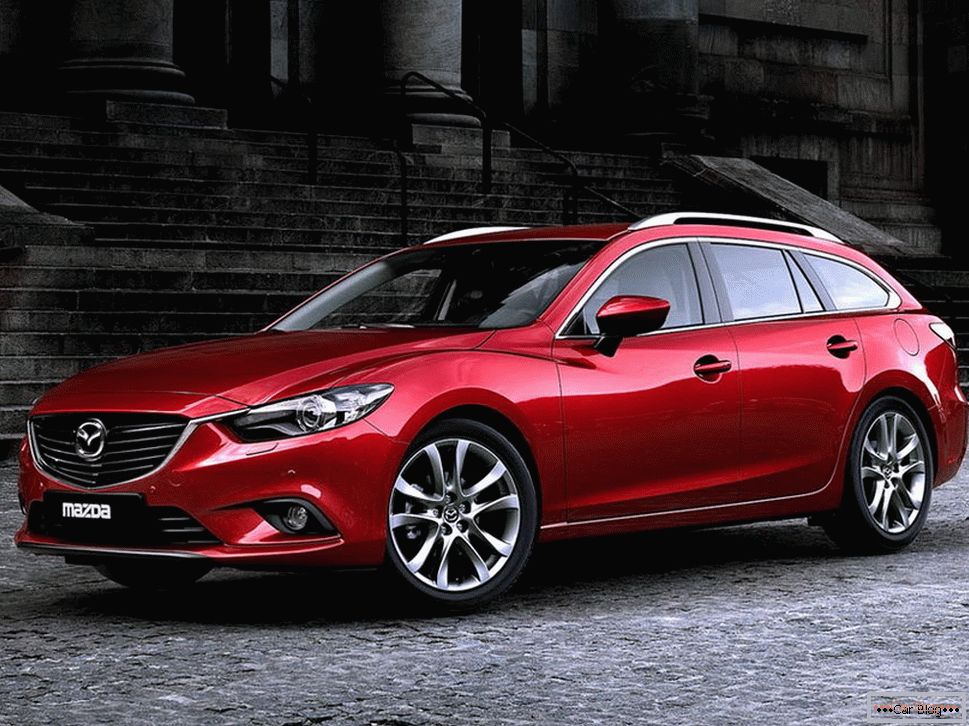 Mazda 6 with a station wagon

In any version of the body, the Mazda 6 has an elegant representative design - this applies both to the exterior and to the interior. Third-generation configurations have become the richest in the entire history of the line. Thus, the minimum equipment option included in a car for 1,225,000 rubles is:

The maximum grade of the Mazda 6 will cost 1,700,000 rubles. In addition to the above functionality, its equipment includes:

Thus, for an extra charge in the amount of 525 thousand rubles, the buyer receives a car that may well qualify for an attitude to the representative class. Its wide functionality and powerful engine give pleasure to all participants of the trip.

adom.ru has high safety performance and provides sufficient comfort in operation. In addition, several additional packages make the choice of the model more flexible, allowing you to eliminate the unnecessary options for the driver.

The richest grade Mazda 3 costs 1,200,000 rubles. In addition to the listed functions, it has:

This equipment is almost the same in functionality. Its main advantage is a more powerful and efficient engine in terms of fuel consumption. 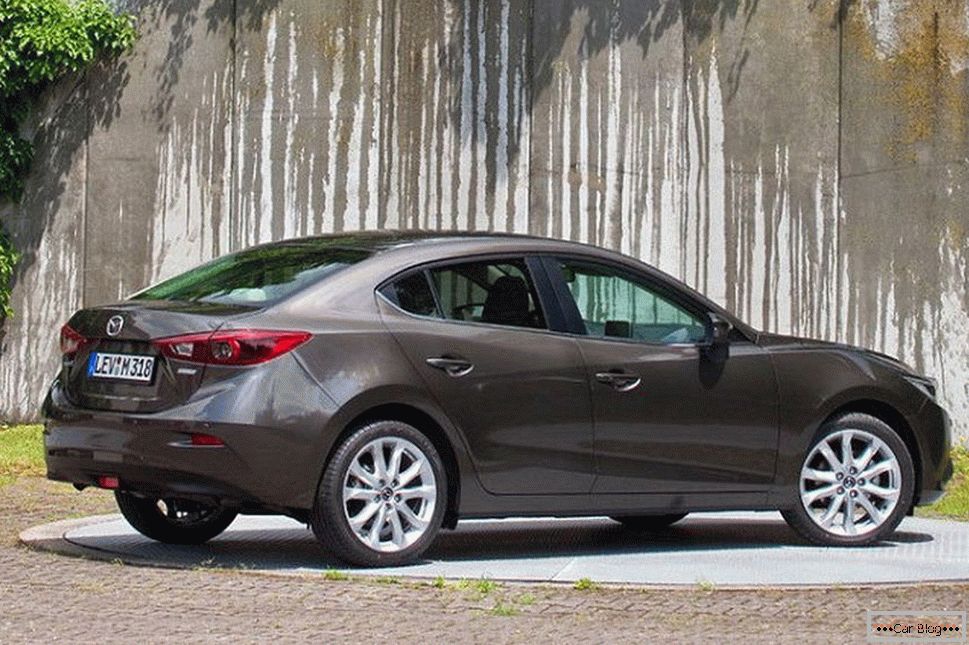 Dimensions of the third generation Mazda 6 are significantly superior to previous versions. The trunk was a little smaller, but access to it was simplified due to the updated openings in the back. 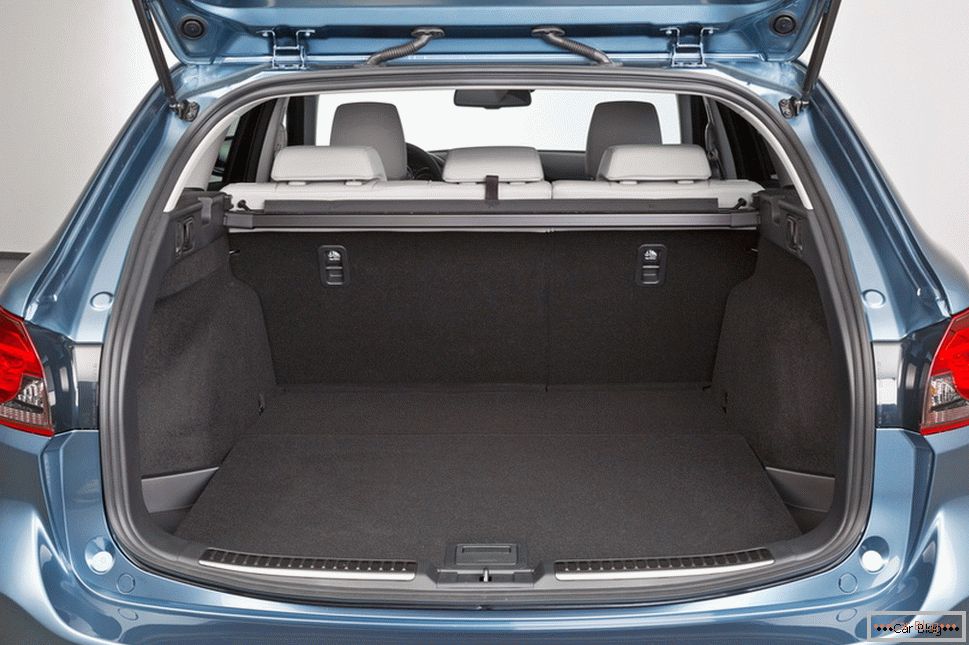 The latest generation has a 30% more durable body, which also became more aerodynamic. 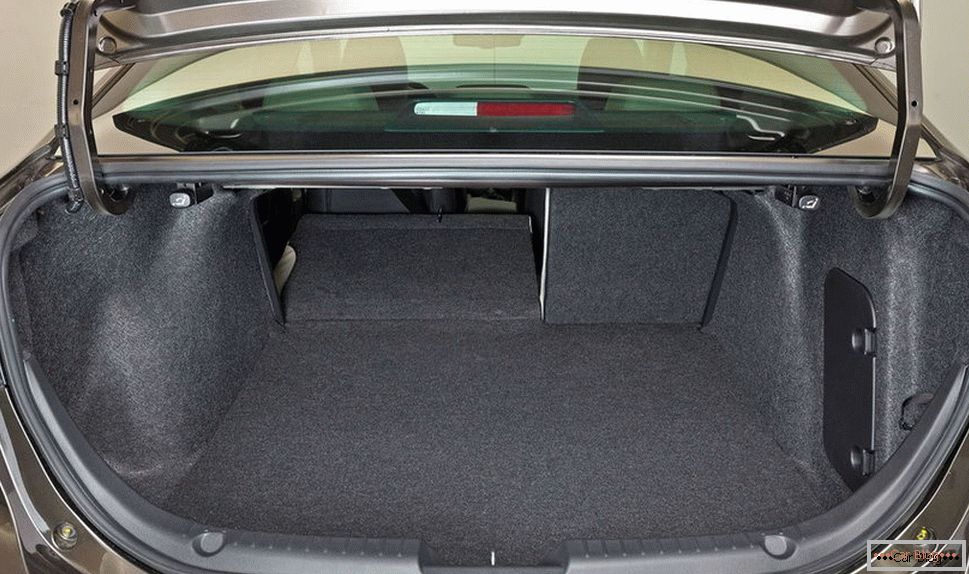 Mazda 6 has more impressive and presentable dimensions of the body, which allowed to accommodate a larger gas tank and make the trunk more volume. Mazda 3 rather refers to compact cars.

Experts have noticed that the design of the Mazda 6 resembles the old Xedos 9. Of course, the “six” is much more modern and complex in terms of body structure, but, undoubtedly, common features can be traced - they are part of the Mazda corporate style.

Mazda 6 has a unique combination of sports and austere mood in the design. Despite its solid size, the car can still be called dynamic in appearance - this is facilitated by streamlined surfaces and inclined lines of the body. Powerful front bumper merges with the grille. Modern design solutions in detail do not allow to call the Mazda 6 a family car. Nevertheless, it looks quite classic. Headlights, compared with samples of the previous version, have become sharper. Back added more freshness. Optics became bi-xenon and can rotate the angle of illumination.

Mazda 3 does not lag behind the relative and is also improving in terms of design with the course of restyling. Its at the same time strict and at the same time dynamic body style has not so many analogues on the market. Thus, a low aggressive front rather sharply flows into a raised rear part, which is emphasized by the corresponding parallel bend on the doors. The appearance of the car is unique, but it still traces the corporate features.

In addition to the aesthetic, the body of the Mazda 3 has functional features. Its bumper structure is designed to minimize pedestrian damage in a collision. The body itself has become tougher and resists shocks, trying to provide protection to the driver and passengers. The collision energy redirection cell allows the impact force to be distributed, and the deployment of airbags depends on the impact force. All these features make the Mazda 3 a perfectly protected car for its class.

Inside the Mazda 6 justifies the highest demands that can only be placed on a car of this class. Modern materials in the decoration provide not only a beautiful view, but also comfort when moving. High-quality plastic, alloys of light metals and leather upholstery have an ergonomic arrangement in the cabin. Convenience of the interior of the Mazda 6 is achieved through prudence and conciseness. Classic features and details are located in familiar places for any motorist, which allows you to feel calm. Leather seats emphasize the solidity of the Mazda 6. The front seats have several settings that can give them a low athletic position or high, for a better view. At the same time, the position of the first-row seats does not affect the comfort of the rear passengers, since there is enough space for everyone in the cabin. 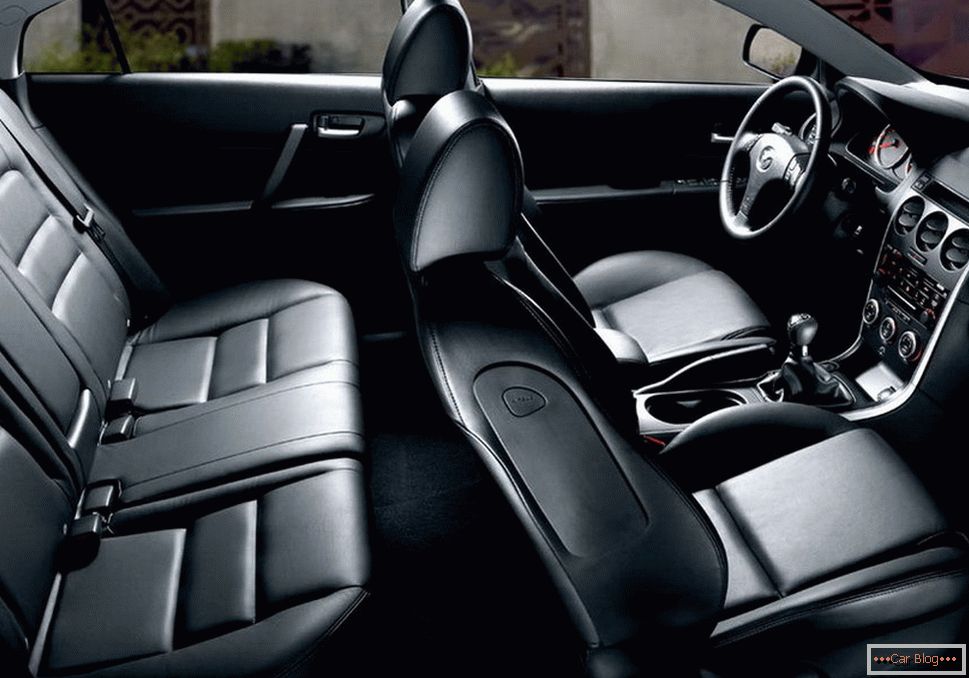 The Mazda 6 console is built around a multimedia system. In the navigation system there are all the necessary buttons and settings. Devices on the panel a little recessed, which is a traditional feature of the Mazda.

As for the Mazda 3, its design almost does not lag behind the sixth model. As in the case of a competitor comparison, the car has a much more elaborate interior than the vast majority of cars in the class. Mazda 3 is based on the same platform as the Ford Focus 2.

The steering column can be adjusted in two directions, and the front seats are designed in such a way that provide as much space as possible to the rear passengers - this is true for a relatively small cabin. The driver's seat is optimized for long trips, allowing you to maintain a comfortable position and less tired in a sitting posture. 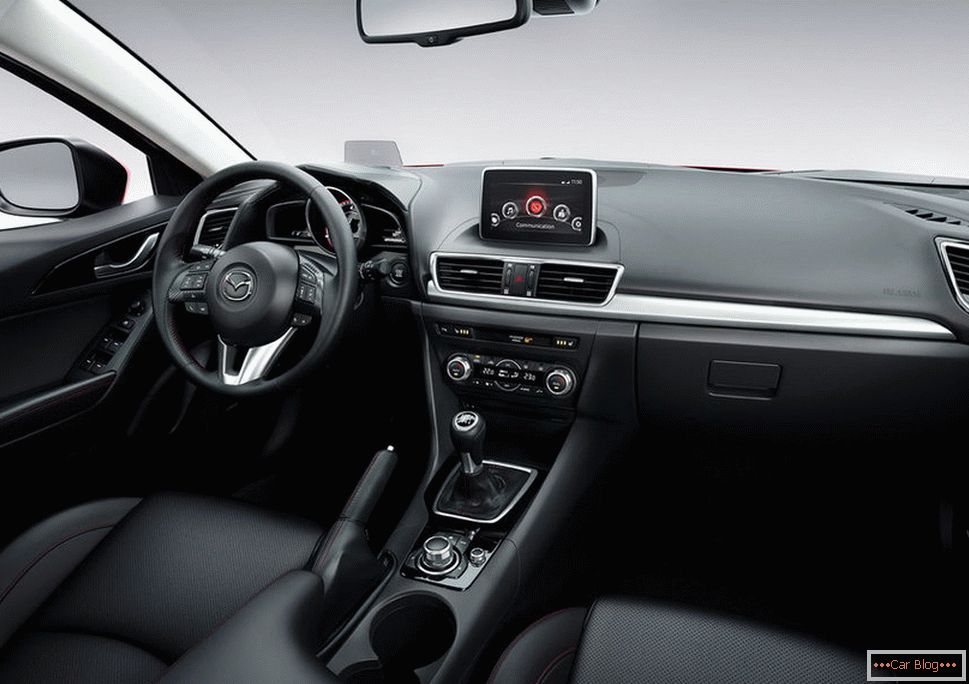 The following engines are available in Russia for trim levels: for 2 liters with a capacity of 150 horsepower and 2.5 liters with a capacity of 192 horsepower - both petrol engines. The power units are supplemented with six-speed manual and automatic transmissions, which allows you to choose the optimal combination. The chassis is sporty and front-wheel drive. The most powerful of engines allows you to accelerate to a hundred in 7.8 seconds. The maximum speed of the Mazda 6 is 223 km / h. Fuel consumption on average - 6.4 liters per 100 kilometers. In the European market, there are other engine versions, including diesel.

Mazda 3 also has two engines. They are noticeably weaker than those of a competitor - 1.6 liters and 104 horsepower, as well as 1.5 liters and 120 horsepower - both run on gasoline. They can be supplemented by a six-speed manual and four-or six-speed automatic. The latter is only available in the maximum configuration. In operation, the Mazda 3, despite the characteristics that are inferior to the sixth model, behaves perfectly: the speeds switch easily and smoothly due to the engineered transmission, the engines do not consume a lot of fuel, consuming an average of 4.9 liters each.

Mazda 6 is suitable for those drivers who would like to get one of the best complete sets in the class - the car is equipped better than most representatives of the C segment, while remaining relatively inexpensive. Mazda 6 is designed for lovers of comfort and functionality, who are willing to pay more compared to the third model.

Mazda 3, in turn, is suitable as a dynamic car of economy class with a slightly more modest equipment than a relative. Quite powerful engines and compactness provide easy movement around the city. The car, despite the low price by the standards of competitors in the D-class, offers excellent equipment.

English cars are smart and come in limited quantities.