Despite the fact that SUVs from South Korea are clearly inferior to the more famous Japanese, European and American in popularity, you should not ignore their existence, if you want to buy a really good used car in this class. An excellent option would be Kia Sportagе, which has both its strengths and weaknesses, but with the right choice of car, the purchase will not disappoint you. 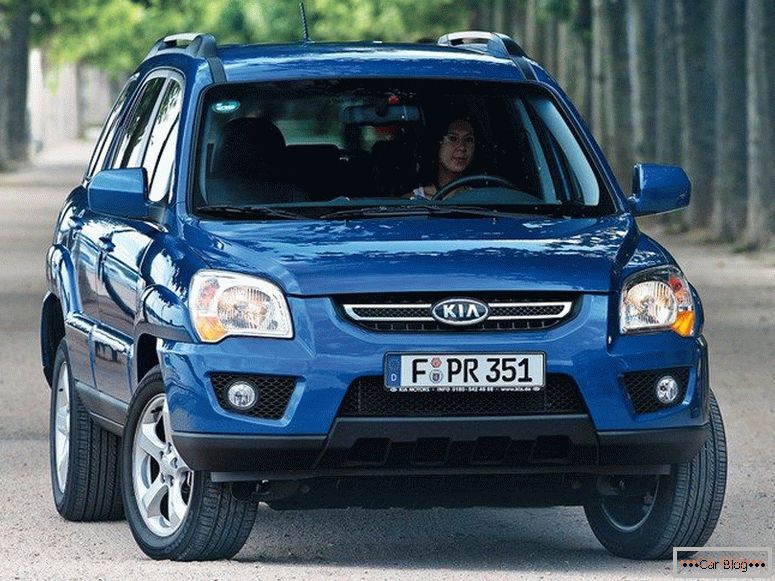 Not many people know, but the company KIA began to produce SUVs even before the boom began on such cars. By the way, this boom was the cause rather of a decline in the popularity of South Korean SUVs. The fact is that crossovers came into vogue, which differed in comfort, and the KIA created, rather, all-passable cars, in which the main quality was practicality. That is why the first generation of the Sportage model was by no means the most successful and popular.

But after being controlled by another South Korean Hyundai brand, Sportage received a global restyling, after which it took its place among the popular crossovers around the world. So, the car has lost large dimensions, and with them, and elegant permeability. But, the ride in the Kia Sportage has become much more comfortable. Also significantly reduced fuel consumption, which made the car much more practical for urban conditions. Kia Sportage has become much more modern and comfortable, it is for these qualities that we love the two thousandth crossovers.

Further, in 2004, the Kia Sportage experienced the last global restyling, which made the car completely in line with its class and time. The car returned power and throughput, added automatic transmission, and also optionally allowed to purchase a version with all-wheel drive. In addition, as the prototypes, the models were no longer used by Mazda, but by the Mitsubishi brand. 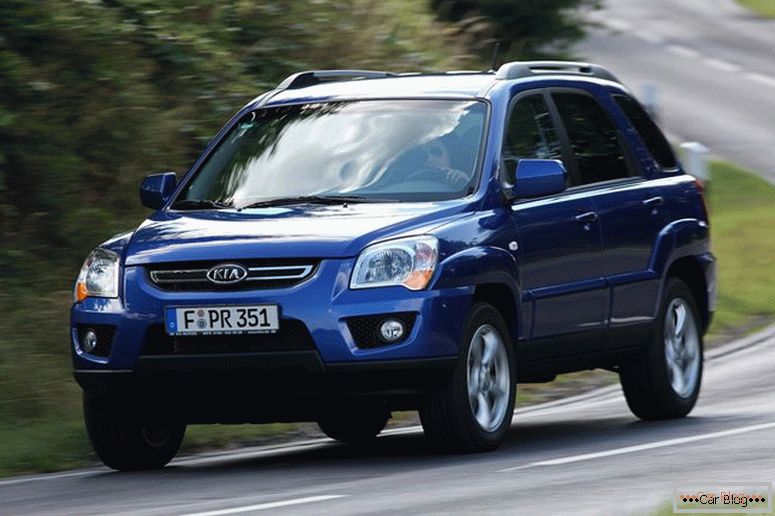 As a result, the car turned out to be a fairly standard, typical representative of this class at that time, but the excellent build quality and reasonable price caused the Kia Sportage to conquer the global market and become a truly mass model. It is not surprising that in Russia a lot of cars are given models that can be purchased for relatively little money, especially when compared with the same Japanese SUVs of those years.

The body of this car has a traditional form for this class of car and looks quite soundly. So, the paint and varnish are quite durable, so most of the cars with minimal care look presentable and solid. Traditional "sores" where corrosion takes its arches, especially in the lower places and near the seams, as well as suspension racks, which are on both sides of the car. Little things like brackets on the bumper and glass at the back can be completely rotten, which indicates poor care, but should not cause much surprise. 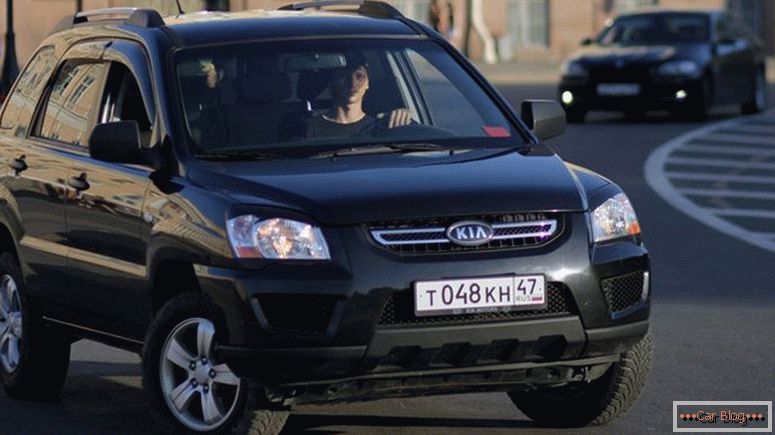 Also a scratch can get to the windshield, usually starting its way under the moldings. You should carefully study all these sites when choosing a car for yourself. During specific operation there may be problems with the appearance of rust on the suspension elements, as well as in the area of ​​the rear part of the bottom. Such foci should be immediately destroyed, otherwise they can lead to serious negative consequences.

Note another problem typical for an SUV: the possible appearance of rot. The fact is that when traveling on a wet road, all the liquid takes on the lower part of the body, where processes detrimental to the integrity of the machine can begin. Also, decay can occur inside the trunk, which is caused by a fairly rapid failure of the seals on the tailgate.

Optics from South Korean brands have always been far from the best. The headlights on the Kia Sportage do not have increased durability, they are quite fragile and are prone to fading. In addition, they are subject to negative influence from moisture and various other factors. Another problem place can be the door. Again, cracking seals that simply do not fulfill their function, make themselves felt. Limiters also often fail, especially during long-term operation, the rear window heating stops working normally, which can lead to inconvenience when operating the machine, therefore these problems are recommended to be fixed immediately.

The interior of the car, as for an SUV at such a reasonable price, is absolutely satisfactory. Yes, a lot of plastic material that is hard and prone to contamination has been used here, yes, some plating materials do not have a very high margin of safety, but, in general, the machine is good if you consider the cost of purchasing it and the resulting level of comfort. Of course, from time to time the electronics "naughty": power windows and air conditioning work poorly. 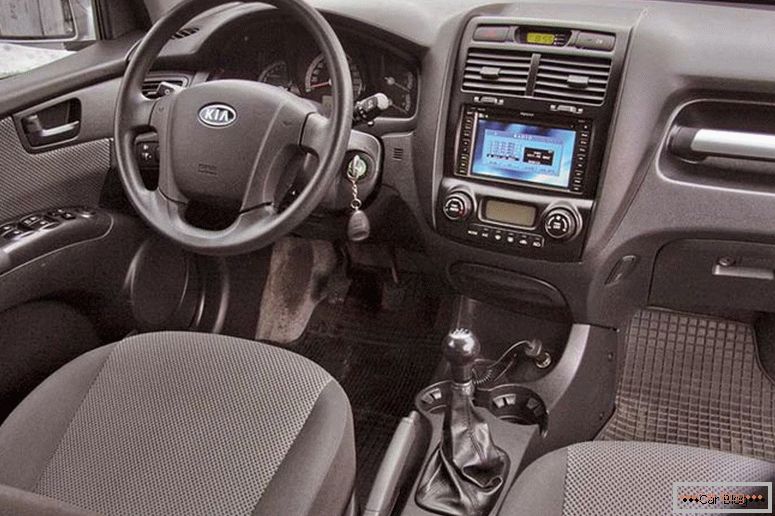 The wheel also loses presentability over time, but it can also be restored at minimal cost. If the driver or passengers regularly ride overweight, this will necessarily have a negative effect on the state of the seats, which over time bend and lose their original appearance. Also, various additions to chairs, such as armrests, can eventually fail. But all this is relatively small problems with the interior, which do not significantly affect the level of comfort, and to solve them, if desired, is not worth much money.

Electronics in the car

In terms of electronics, the car is quite consistent with the level of an SUV. So, because of not the best insulation, small pieces of earth, sand can get into the wiring, which obviously does not affect positively its integrity. Sensors responsible for the operation of the engines and the overall temperature inside the car have a considerable resource, but after a couple of hundreds of thousands of kilometers the entire sensor system is recommended to be replaced. 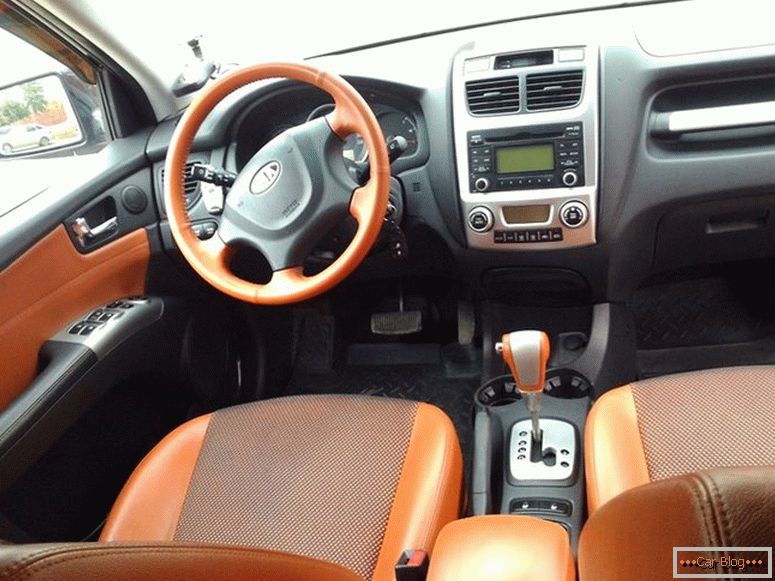 There are no claims to the brakes related to the duration of operation. But there are complaints about the approach taken by the South Korean company. Brake hoses require fairly regular replacement, otherwise they may burst at the most inopportune moment, but at the same time, the brake pipes are still in good condition and do not require replacement. This is due to the design features of the KIA.

The souring of various elements (fittings, calipers) is also a common phenomenon, but is solved without significantly large investments. It is also worth saying that the brake discs do not differ in durability, since they do not correspond a bit to the mass of the car, they are constantly under pressure. ABS sensors Kia Sportage owners have to change regularly, but it is also quite affordable type of maintenance work on the car.

Suspension on this car is excellent, but due to sufficiently long operation and problems may arise with it. This is especially true of spring mounts, which can simply crack, and the shock absorbers are not distinguished by a long resource. The problems can be attributed, and all the same tendency to sour. In general, MacPherson traditionally performs well in operation. But in the repair, for example, stabilizers will rather disappoint you, and if you have problems with them, you will have to change the whole system, which will be a considerable expense. 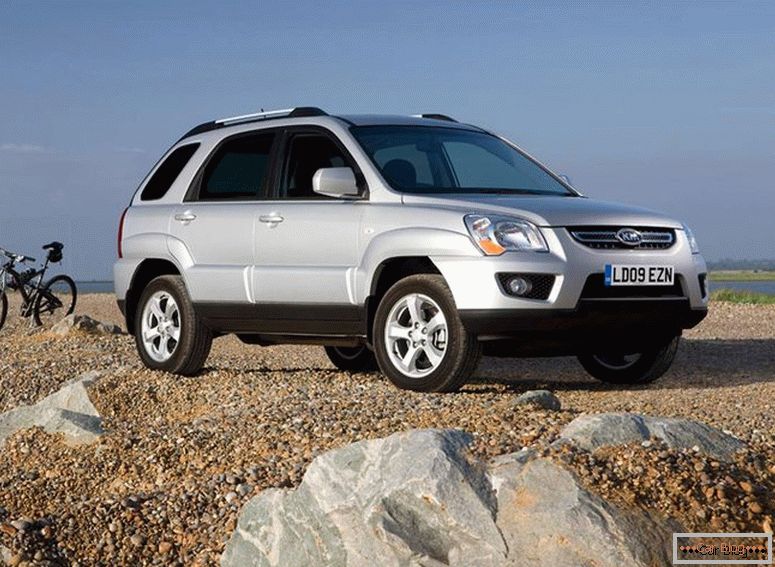 As for the steering rack, it works reliably, does not play, but over time, knocks may occur.

The transmission on the Kia Sportage is good if you expect to drive a new car for 6-7 years, but then it starts to cause you problems precisely because of age. For example, you will have to replace the cardan shaft cross, which will cost you a pretty penny. Purely Russian, more precisely, cars assembled in Slovakia, are distinguished by one common disease: the right CV joint fails. And it is simply explained: here they did not report lubrication to the inner hinge. About 4-5 years of this resource will be enough, and then you have to fork out for repairs.

If you have a Kia Sportage with all-wheel drive, then the right-axis clutch activation will also become a problem point, but you can fix this problem without huge costs. In general, the main "enemy" of the Kia Sportage transmission is dirt, which, unfortunately, is quite common on the SUV track. As a result, you should regularly maintain and diagnose the car so that an unpleasant surprise does not happen on the road. 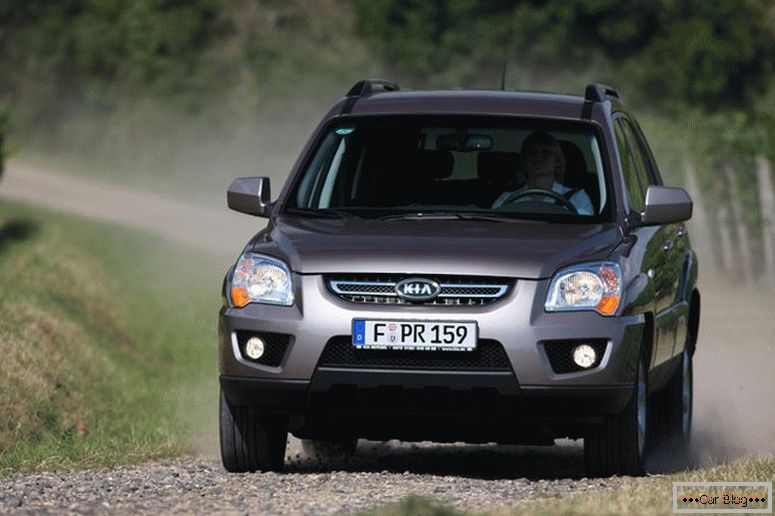 The gearbox works quite tolerably, there are no significant comments. However, on the “mechanics” the switch device bolt can simply unscrew, which will lead to the box's failure. In general, the replacement of manual transmission for the Kia Sportage will not be too expensive due to the ease of the work itself on the removal.

With automatic transmission also no special problems. Here are installed two versions of the boxes, depending on the engine: F4A42-2 / W4A42, F4A51 / W4A51. The first option is designed for less voluminous motors and quite well shows itself in operation, pleasing with long and reliable work. The box is four-step, but it will be undesirable to accelerate through it, because heavy loads can significantly reduce the life of the box. F4A51 / W4A51 is designed for more resourceful engines, and therefore is fully ready for the loads, perfectly manifests itself with sufficiently tough operation. Of course, with normal maintenance.

South Korean engines are known for their durability and reliability. "Weak places" can only be called sensors of motors, as well as cooling systems, but this is typical of many engines. Radiators are prone to leaks, so you should carefully inspect the condition of the hoses and nozzles. With the replacement of the radiator you are not lucky, because the Kia Sportage is poorly compatible with Chinese units. More precisely, the system is not fully compatible, which is why masters often show initiative, which often results in errors and the appearance of new faults. 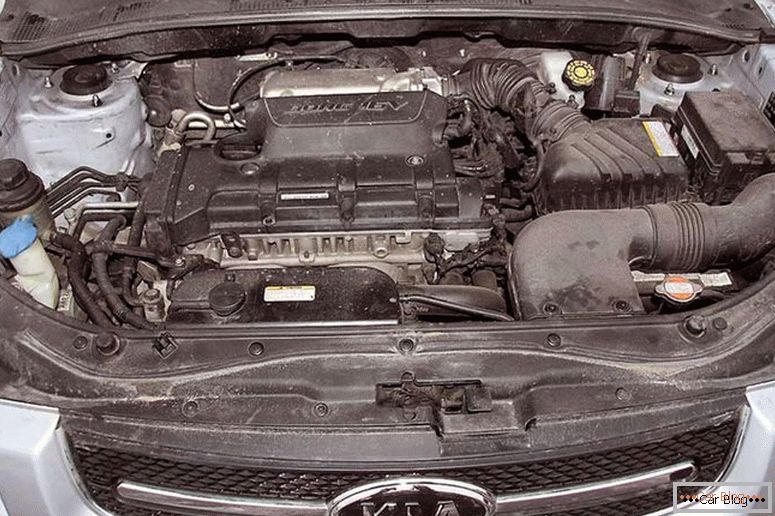 The two-liter engine is the main on this car and is present in almost all trim levels. He is quite good, provided by Mitsubishi and shows a good momentum, turnover. But, it is worth saying that the entire system is quite demanding on the quality of the oil, so you will have to not skimp on purchasing this consumable. A more powerful engine of 2.7 liters is different in that it uses a hydraulic belt tensioner, which has become far from the best solution for this engine. The rest of the engine 2.7 liters is reliable and good in operation. Problems can cause except that the speakers and the intake system, but this happens far from often. Questions and raises the work of the computer.

Diesel engines from the Kia Sportage in Russia a bit, and we do not recommend choosing a car for this fuel.

Summarizing the above, we can safely say that the Kia Sportage is an excellent choice in terms of price and quality. Of course, the whole range of advantages of this car can be assessed only when buying it in a new form, but also, acquiring second-hand, you have great chances to become the owner of a great car. For its value, Kia Sportage is one of the best options for SUVs.

Next, a video test drive of the 2nd generation Kia Sportage: 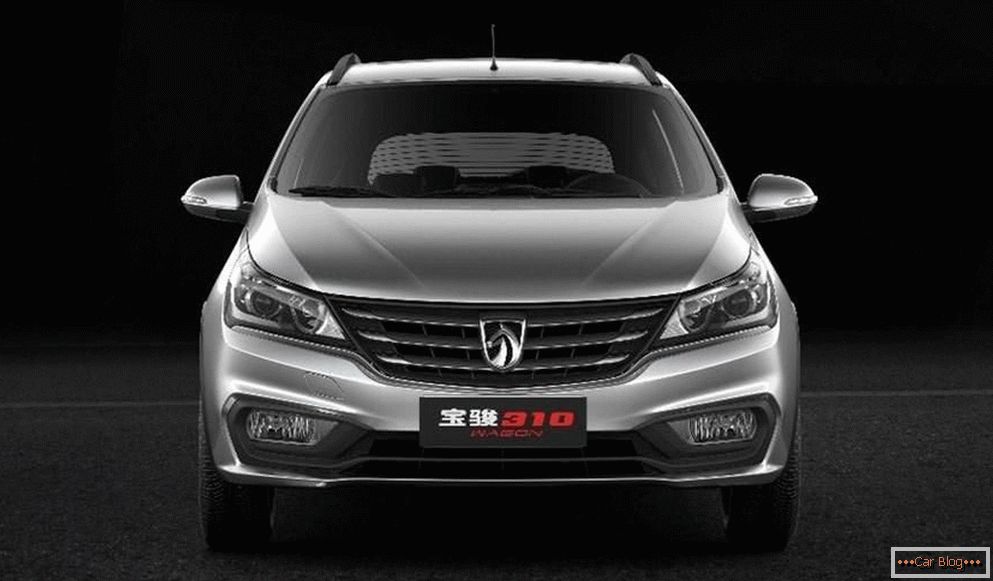 Sgmw managers published the first shots of the new 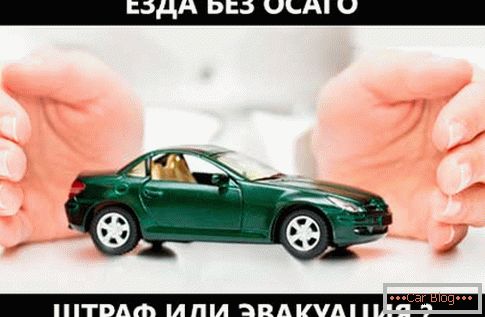 New penalties for the absence of ctp in 2018 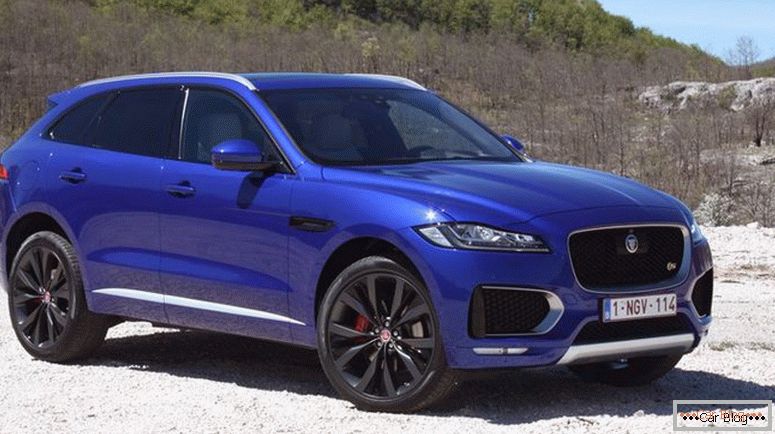 Jaguar f-pace is very similar in characteristics to the

Toyota began to produce the new camry for the american car

Big, powerful ... but not a jeep! honda cr-v and toyota rav4