Relatively recently, the assembly of the Nissan Almera sedan started at AvtoVAZ, but now it’s not the compact sedan with the Classic prefix, but a presentable car able to please even wealthy people. The Russian assembly works wonders - Almera has turned out to be cheaper than most of its competitors and is almost oppressing the products of the Volga plant itself. Maybe this price was assigned for a car for a reason? To answer this question, you should compare the car with one of the recognized leaders of the budget class, which is Hyundai Solaris. Let's see who will be closer to the Russian consumer - Hyundai Solaris or Nissan Almera, and can a newcomer become a real people's car? 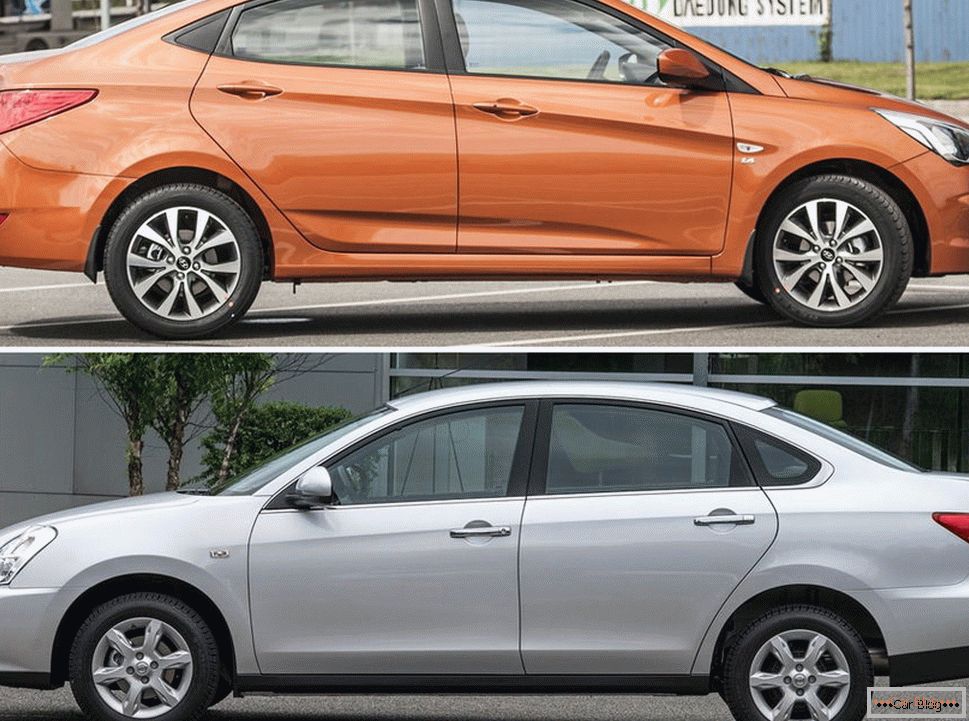 The design of the Hyundai Solaris is already familiar to every Russian driver - its silhouette with a short trunk and a high “hump” of the cabin is recognized unmistakably. Particularly impressive is the Solaris front end with slanted headlamps of complex shape and LED fog lamps. Adds enthusiasm to the appearance of the Hyundai as a V-shaped grille and low-hanging over it hood. If you look at the car from the side, then from afar you will notice the complex shape of the sidewalls and bulging wheel arches, adding to the Hyundai Solaris elegance. However, such details not only make the Hyundai sedan presentable, but also dramatically increase the price of body repair, which, in the opinion of the owners, is sometimes exorbitant. 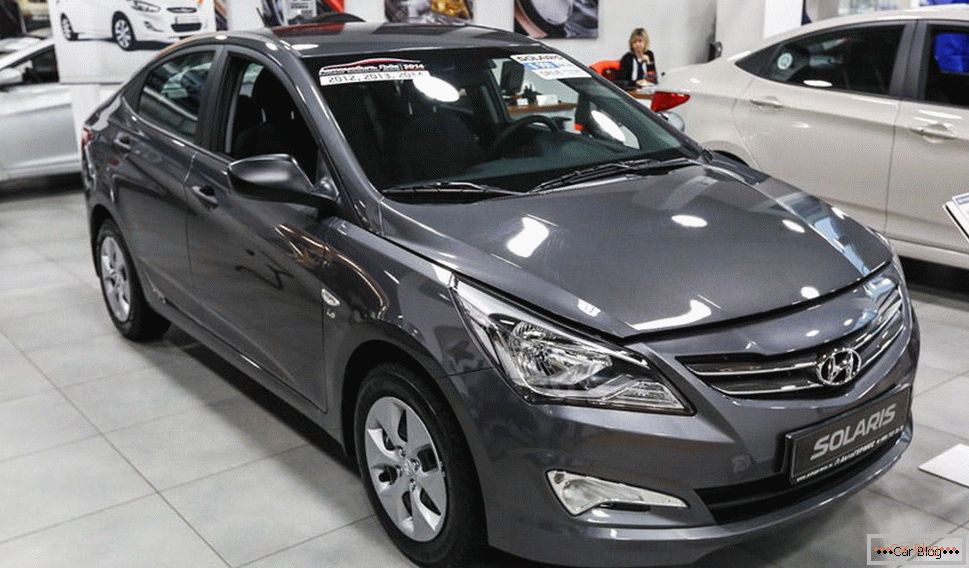 Another thing - Nissan Almera, which began to be actively sold only after the launch of the Russian assembly. It is much more similar to the classic three-volume sedan and in profile it resembles the wrong car of the previous generation, not the older model Nissan Teana. Nissan companies have much to be proud of - for a smaller amount than Hyundai Solaris sellers require, they offer a older car that has an additional 30 centimeters of length. Of course, the profile of the Nissan Almera looks simpler, since its sides do not have deep underpieces and other interesting design elements, but, on the other hand, this greatly simplifies body repair. 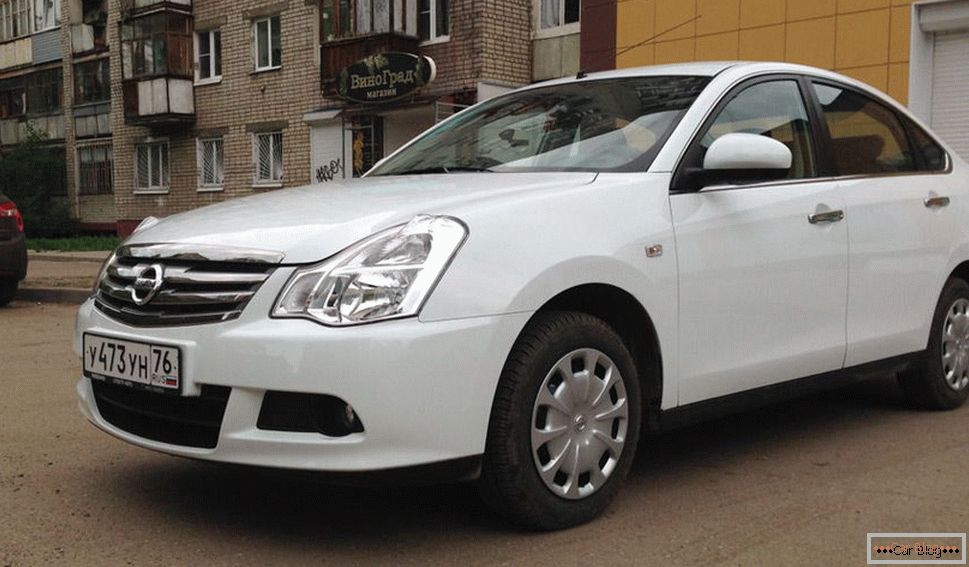 When viewed from the front, the resemblance to the Nissan Teana becomes even more noticeable - it is provided with large headlights with small additional segments and a characteristic grille with four wide crossbars. However, the roof rack Nissan Almera in its angle of inclination are similar to the Hyundai, which in combination with a long hood looks a little awkward. The situation is saved by the view from behind - from this perspective, Almera seems to be even larger and more solid. It is appropriate and a massive bumper with a flat surface, and a long trunk lid, and a hollow sloping roof rack. Especially spectacular look taillights Nissan Almera, similar to the outstretched wings of a large bird.

Inside the Hyundai Solaris looks even better than the outside. Hyundai designers have done a real miracle by making the center console, similar to the button smartphone of previous years, both beautiful and functional. In addition, the Solaris passengers are invariably attracted by the "waves" on the front panel and the bizarrely curved lines of deflectors. "Top" equipment Hyundai Solaris contains many types of equipment, among which are:

However, even for a surcharge, you cannot equip Hyundai Solaris with a multimedia system with a touch display and stabilization system. 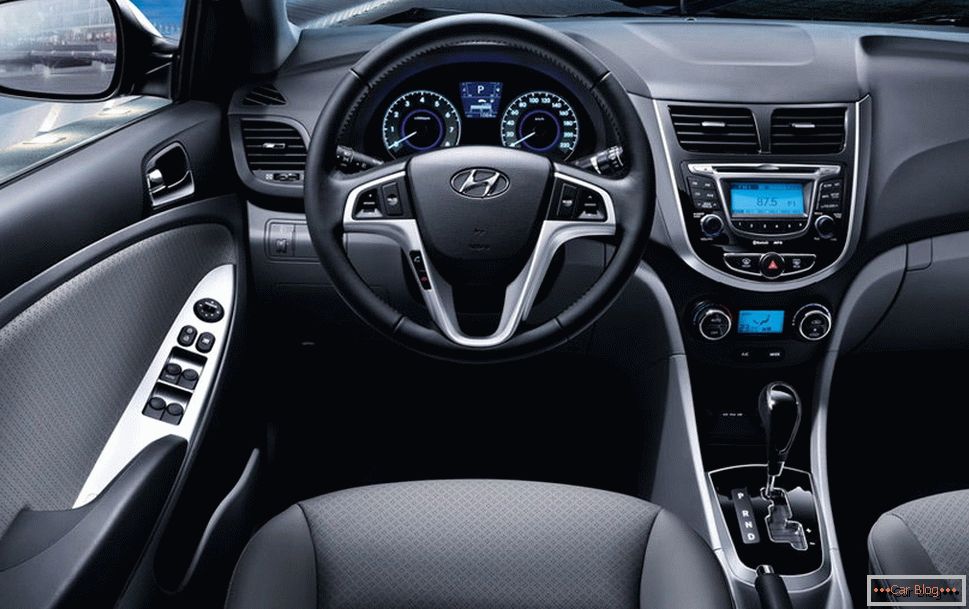 The seats of the compact Korean sedan are very good, as they reliably hold the driver and front passenger of the Solaris even in very tight corners, without constantly changing positions. But with lateral support, the Hyundai designers clearly overdid it - for a large person it is too tight. But the airbag in Hyundai Solaris can be adjusted in height, which allows people of different height to use the car. Behind the three passengers will be crowded, provided that they can not be called children or teenagers. But the Hyundai Solaris compact trunk seemed not so small - it has a volume of 470 liters and can be expanded by folding the rear seats.

In the case of the Nissan Almera, the opposite situation is observed - the car is much nicer to look outside than from the inside. Simple round deflectors coexist with a completely empty front panel - all controls are moved to the center console. The devices seem inexpressive, and the tiny screen of the Almera trip computer seems to be borrowed from the simple Ladas. In addition, archaism can also be called the lever for switching automatic transmission modes in the Nissan Almera, which is crowned with a huge plastic knob. But the sedan from Nissan boasts a multimedia system with a large screen and built-in navigation, as well as leather upholstered steering wheel, fog lamps and alloy wheels. 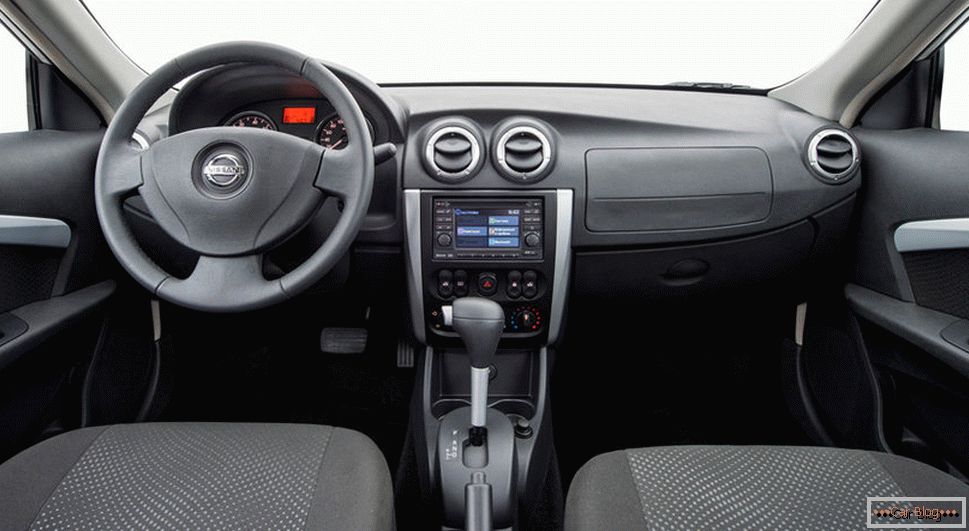 The front seats of the Nissan Almera are also radically different from the seats of the Hyundai Solaris. It will be convenient for large people because of flat wide cushions with minimal inclination and inconspicuous lateral support. But everything can be forgiven the car for the incredible space behind, comparable not even with Hyundai or Renault Logan, but the Volkswagen Passat and Toyota Camry. Here it will not be crowded neither in height nor in legroom, even to three adult men in winter clothes. If only two remain, they will be able to doze off or work with full-sized laptops. The trunk of the Nissan Almera pleased with a volume of 500 liters, but was upset by the lack of access from the cabin without completely removing the backrest.

A comparison of the Hyundai Solaris and the Nissan Almera shows that, in terms of dynamics, the Korean sedan was expectedly ranked first. On the side of the Hyundai Solaris more power, better aerodynamics and less weight, which allows it to reach "hundreds" of a little more than 11 seconds and accelerate to an excellent rate of 185 km / h. The Solaris economy also deserves special mention - it is quite possible to keep fuel consumption at the level of 5.5–6 liters on the highway, and 8–9 for city driving. In this case, the Hyundai engine quickly responds to the fuel supply, which allows you to make active maneuvers.

Of course, part of the enthusiasm of Hyundai Solaris is lost due to the automatic transmission, but the six-speed unit still works better than other transmissions installed on low-cost cars. With a sharp pressure on the gas, Solaris tries to keep the transmission for a long time, ensuring steady long overclocking without loss of power.

The power unit Nissan Almera well pulls the car at low revs, but loses its enthusiasm when it reaches 3500 rev / min. The result is an annoying indicator for a modern car in 13 seconds of acceleration to 100 km / h, as well as the impossibility of making sharp overtakings and other active maneuvers. In addition, in urban areas, the fuel consumption of the Nissan Almera can reach 12 liters, which seems not at all permissible for a car with a 1.6 engine.

Most of the blame lies with the ancient four-step “automaton” that Nissan uses. It shifts gears too slowly and causes the engine to move frequently to high speeds, which causes the Almera driver to press the gas pedal harder. The situation can be saved by ordering a car from a manual transmission, although in this version Nissan Almera spends about 9 l / 100 km.

On good asphalt, Hyundai Solaris behaves exemplary, but hitting the slightest road bumps causes it to startle the whole body. If you go on a bad road, you will have to immediately reduce speed, because Solaris not only transmits the entire profile of the coating to the salon in detail, but also constantly gets off the chosen course. Not too good and the situation with handling - in sharp turns the car noticeably heels, despite the stiffness of its suspension.

By its nature, the Nissan Almera resembles most of the cars of the D-class, to which it clearly equals. Even when driving on serious irregularities in the cabin, silence and tranquility remain, which is disturbed only when hitting a high-raised hatch or a speed bump. Of course, the Nissan Almera has a calm ride, which is due to the deep heels and the lack of reverse effort on the steering wheel.

Another 7–10 years ago, the Nissan Almera could be considered the best people's car - because at that time, fuel costs did not occupy such a large part in the family budgets of Russians. And today he may be interested in people who are calm, sensible, who value comfort in cars. But behind their backs is already an active young generation, which prefers fast and efficient compact cars - such as Hyundai Solaris. 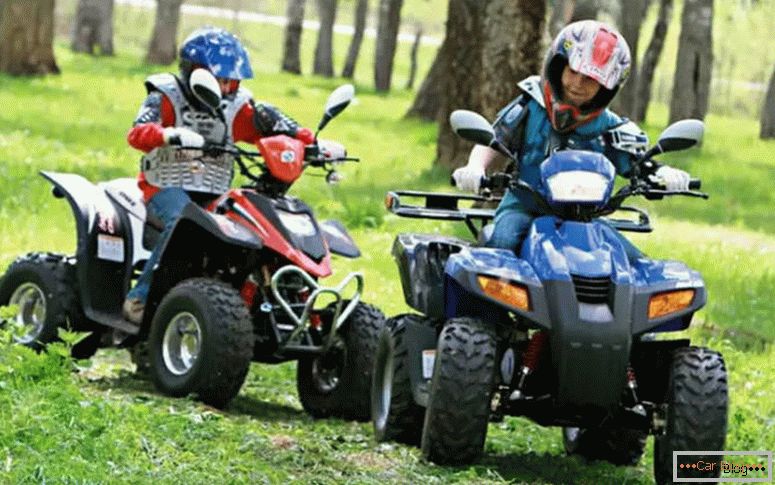 Category rights for the quad 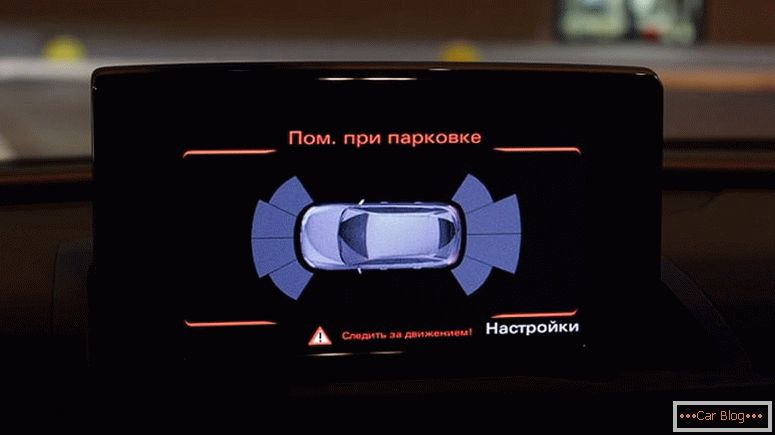 Which parking sensors is better to choose 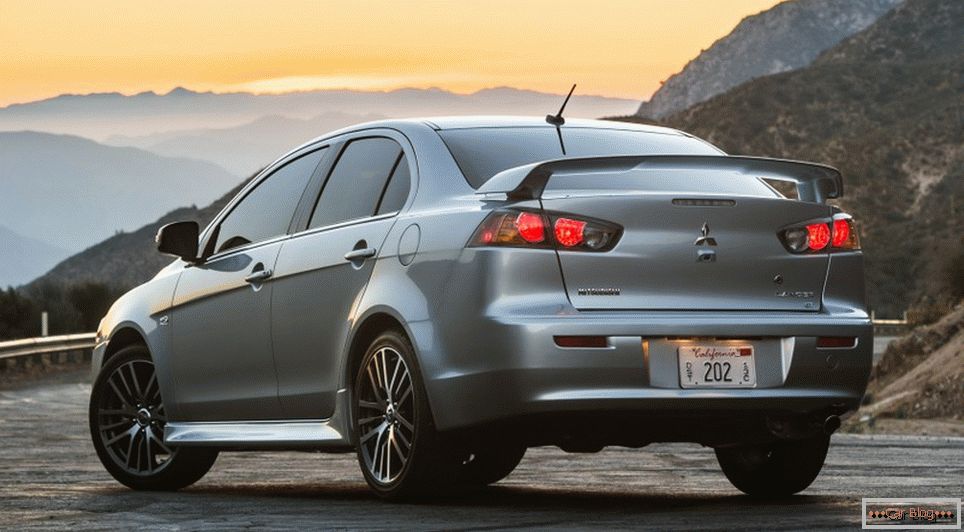